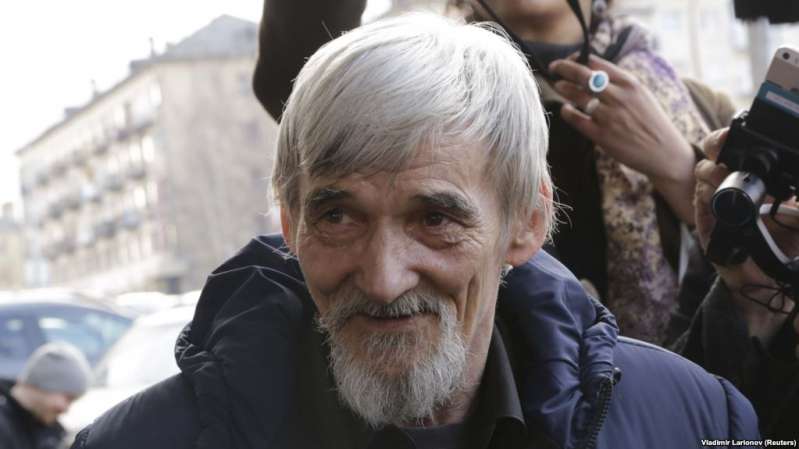 The verdict is due on 22 July in what a huge number of prominent Russians one of the grubbiest political trials in the country.  Modern Russia has long been imprisoning people for their civic position or beliefs, but the case of renowned historian of the Terror and Memorial activist, Yuri Dmitriev, stands out for the brutal use of a child to try to destroy both the historian and his reputation.  After a first trial on trumped-up ‘child pornography’ charges was so demolished by experts that, in the face of national and international condemnation, it resulted in an initial acquittal, the enforcement bodies came back for more.  After unwarrantedly getting the acquittal revoked, they reinstated the initial indictment , while adding grotesque charges of ‘violent actions of a sexual nature’ against the same daughter whom Dmitriev has not seen since December 2016.  While taking a 12-year-old child from the only family she had ever known, Russia has used her age as an excuse for holding the entire ‘trial’ behind closed doors.  Details have, however, now become clear both from Dmitriev’s final address to the court on 8 July and from other information.  They confirm the cruel cynicism behind this case and lack of any grounds at all for the charges.

It is clear that there were never any ‘violent actions’ and nothing at all of a sexual nature in Dmitriev’s behaviour, only a father’s legitimate concerns for his daughter’s well-being.  This was confirmed during the first trial in which the prosecution had tried to treat as ‘child pornography’ photographs taken over a period of years, documenting the height and weight of a little girl who had been weak and underweight when taken from a children’s home.  It seems that the new charges, for which the prosecutor has demanded a 15-year prison sentence, are in connection with a period when Natasha was 8 years old and began having attacks of enuresis (involuntary urinating).  Like any other parent in such a situation, Dmitriev would, if he noticed the tell-tale smell, pat the little girl’s knickers around the area of the groin to see if they were wet, and if necessary get her to have a wash. There is confirmation in Natasha’s medical records that she was suffering from enuresis, yet the prosecution has claimed that these were ‘violent actions of a sexual nature’.

There has long been concern that Natasha was placed under intense pressure to try to extract ‘incriminating’ testimony.  Linguists from the Russian Academy of Sciences Russian Language Institute of the investigators using communicational pressure. Due to the secrecy imposed on the case, details are scant as to what this pressure entailed, however a Moscow State University professor has also studied the texts of the child’s conversation with a psychologist and points out that Natasha’s testimony about Dmitriev’s actions do not meet the standard criteria for recalling traumatic experiences.

Towards the end of the first trial, Dmitriev’s lawyer, Viktor Anufriev showed a letter that he had presented in court.  The then 12-year-old girl had coloured in a huge heart, writing how much she loved and missed her Daddy.

For very many people in Russia, Ukraine and other countries of the former Soviet Union, it was people like Dmitriev and his colleagues from the Memorial Society who restored the truth about Stalin’s crimes and, especially, about the fate of the victims of the Terror.  It is thanks to  Dmitriev, for example, that we know the fate of 289 Ukrainian writers, playwrights, scientists and other members of the intelligentsia, who were among 1,111 prisoners from the Solovetsky Labour Camp who were executed by the NKVD, by quota, at the Sandarmokh Clearing in Karelia.

There are very strong grounds for believing that Dmitriev’s persecution (as well as that of fellow historian Sergei Koltyrin) is directly linked with attempts by the current regime under President Vladimir Putin to rewrite the history of Sandarmokh, and to whitewash Joseph Stalin and the Soviet regime.

During to the court on 8 July, it became poignantly clear just how Dmitriev’s own experiences had influenced both his decision to adopt a child and his word in restoring historical memory.

“I don’t know who my biological parents were, where they were from, what nationality, what faith and what culture. And that has seriously directed me in searching for my roots. "  Humans are different from insects, he says, specifically because of the memory of their ancestors, of who they were.   This has surely also governed Dmitriev in the over 30 years that he dedicated to restoring historical memory, however he spoke of it in court in order to explain what had governed his actions in taking a child into his home.  Dmitriev already has a grown son and daughter, as well as two grandchildren, but he had himself known what it means to be deprived of parental love and care.  He had himself been lucky to have been adopted by a War veteran and his wife, and it was that love that he had received from them that he wished now to pass on to another vulnerable child.   It is clear from the little that he says, that he and his wife ran up against huge obstacles but held out and adopted little Natasha when she was three and a half years old and had been left in a children’s home by her grandmother.

There were also constant medical concerns.  Natasha had been very ill-nourished and thin when they took her from the children’s home, and although she ate well and the family never economized on food, she remained thin.  He first got a referral to an endocrinologist when she was six.  Each visit lasted a long time, with the specialists unable to identify the specific problem, but clearly seeing the need for regular observation.

All of this, it should be stressed, must be fully documented, including two referrals in 2016, first to the city children’s hospital, and then to one for Karelia.  Whether she was placed in the Karelia hospital, Dmitriev does not know, as he was arrested (on 13 December 2016) before he could see to it.

In everything that Dmitriev describes, we see only a father concerned for his daughter’s health and not somebody who could commit what he clearly calls “disgusting acts “.

“I consider, and the Constitution of the Russian Federation supports me in this, that the power of a state lies not in tanks and cannons, not in nuclear missiles and the possibility of telling everybody to go to hell.  No, the power of a state lies in its people. How people behave in this state will reflect how it develops and prospers and becomes wiser. “  It was precisely in accordance with these wishes set out in the Constitution, to raise their daughter to be a useful member of society.

“I entirely agree with our state that we need to remember the fallen in the War because this is a part of our memory. However, we need to also remember those people who were killed through the evil will of the leaders of our country. It is this that I consider to be patriotism. This is what I taught Natasha, this is what my children Yegor and Katya also know, they and my grandchildren.  This is known also by those schoolchildren and those students with whom I worked, it is probably known by all civilized people.

Therefore, your Honour, I consider that this case, which we have already for a long-long time been pulling apart and considering , was specially created in order to discredit my name and at the same time to cast a cloud over those graves and graveyards of the victims of Stalin’s repression which I was able to uncover and to which people come and gather.

To this day I don’t know what the aim was of beginning this prosecution. Was it to stop people’s memory?  With these actions, they won’t succeed.  To deprive me of the opportunity of taking part in this?  I have not taken part for three years, yet it [the remembrance of victims and restoration of memory] has not been stifled”.

Judge Alexander Merkov, from the Petrozavodsky City Court is due to announce the verdict at 14.30 Moscow time on 22 July.