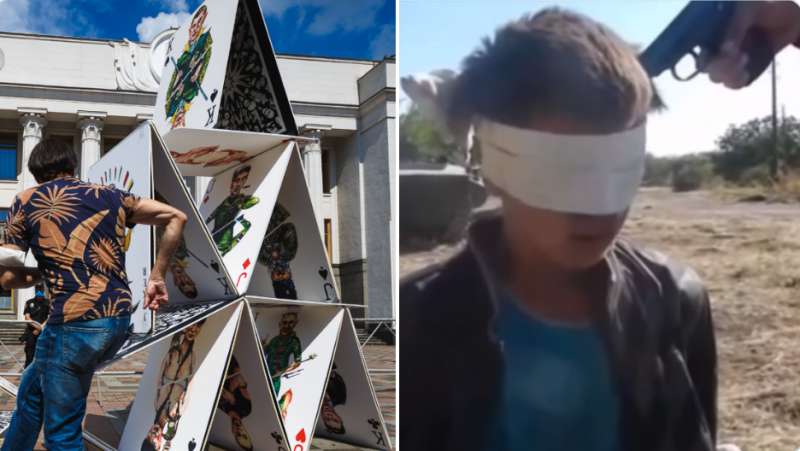 Former hostages tortured by Russian-controlled Donbas militants have added their voices to demands that Verkhovna Rada deputies finally pass a bill on fighting war crimes and crimes against humanity. It is truly incredible that well over six years after Russia unleashed its undeclared war against Ukraine, there should be any MPs claiming that now is not the time for such a law.

There are compelling arguments for adopting draft bill 2689, but Donetsk artist and former hostage Serhiy Zakharov presented his message visually during a demonstration outside the Verkhovna Rada on 21 July.   In performance art, entitled ‘Putin’s House of Cards’, participants held up ‘playing cards’ on which Zakharov had drawn notorious militants and others.  The cards were all assembled as a house of cards, which Zakharov then collapsed by merely removing one card – the Joker.  He explained that the Joker is Russian President Vladimir Putin and that without him, the entire system will collapse.  He is adamant that Putin “must be punished”.

One of the former hostages present was writer and journalist Stanislav Aseyev.  He spent 31 months imprisoned in the self-proclaimed ‘Donetsk people’s republic’, being held and tortured for most of that time in Izolyatsia, the former art centre turned into a secret prison where Russian and Russian-controlled militants torture with impunity.  He is outraged that “in seven years of the war, parliament has still not found time to pass a draft law on war crimes (now No. 2689) which establishes liability in the Criminal Code for crimes against humanity and war crimes.  That gives both members of illegal armed formations and Putin himself every chance of escaping justice”.

One of the former hostages who addressed the event was Oleksandr Hryshchenko, a veterinary surgeon from Luhansk who was taken prisoner by the militants on 14 July 2014 and held in a basement.   The militants found photos in his camera from pro-Ukrainian demonstrations and Euromaidan and told him that these were sufficient grounds for executing him on the spot or to at least shoot him in the legs. He was beaten and otherwise tortured, including with the use of electric shocks, and mentions other torture methods used, including asphyxiation and the use of surgical instruments. He has also recounted how a young woman was also take away at night.  They claimed it was ‘for questioning’, but Hryshchenko says that everybody understood that she was being raped. “I saw how an underage girl was taken several times to military positions as a gift to the militants for their sexual needs. In other words, that was repeated group rape”. 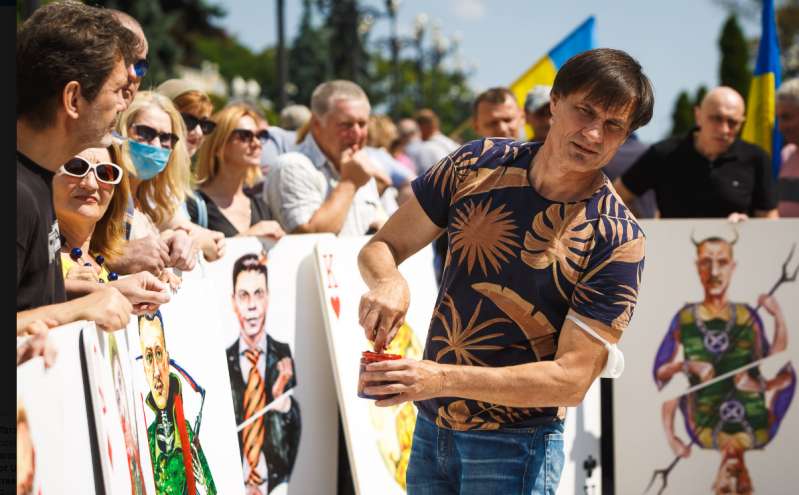 Hryshchenko says that he himself saw a person being tortured to death for having said that he supported a united Ukraine.  He was imprisoned in a basement for six months and has said that during this period, there were quite a number of people tortured to death or simply killed,  .

“I therefore think that the adoption of this law on war crimes is simply urgent, since it is possible that at this very minute, somewhere in the basements of Luhansk or Donetsk, militants are torturing and killing Ukrainians, hoping that they’ll get away with it as the result of an amnesty”.

There had appeared to be progress back in 2019 with making the crucial amendments to Ukrainian legislation needed, with a draft bill, No. 9438 even getting through a first reading on 8 June 2019.   MPs were still not inclined to hurry, however, and new parliamentary elections took place in July 2019 without the bill having been adopted in its entirety.  It was then reworked and re-registered in the Verkhovna Rada as No. 2689 “on amendments to some legislative acts regarding implementation of international criminal and humanitarian law’.

At a press conference back in February 2020, Kostyantyn Zadoya, an assistant professor of law at Kyiv National University, mentioned Russia’s persecution of Crimean Tatars in occupied Crimea as one of the many examples where current Ukrainian legislation is simply incapable of reacting to the new reality before us.  Persecution, he said, is a particular type of crime against humanity, and yet it is not listed in Ukraine’s Criminal Code as a crime. “Even if you find another norm and prosecute for actions which are a crime under international law as though they were an ordinary crime, this will fail to take into account the context of organized violence.”   Amendments are needed as Ukraine’s Criminal Code lacks legal instruments for qualifying the war crimes and crimes against humanity which Russia’s military aggression in Crimea and Donbas have brought to Ukraine.  As a consequence, in the last six years, only one person has been convicted of a war crime.

It is no accident that Hryshchenko mentions an amnesty. If in the first Minsk Agreement, it was clearly stated that capital offences could not be subject to an amnesty, Minsk II says: “5. Ensure pardon and amnesty by enacting the law prohibiting the prosecution and punishment of persons in connection with the events that took place in certain areas of the Donetsk and Luhansk regions of Ukraine”.

Since it is internationally recognized that war crimes or crimes against humanity cannot have any time bar and are not subject to any amnesty, it is critical that Ukraine gets its legislation in order now, with only Russia winning from this endless delay.