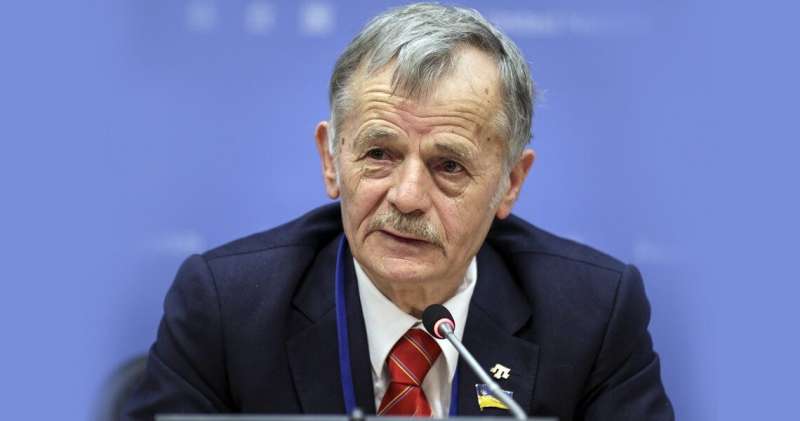 The material in Russia’s extraordinary ‘trial’ of veteran Crimean Tatar leader and Ukrainian MP Mustafa Dzhemilev includes three versions of a request for legal assistance from Ukraine.  Since Russia banned Dzhemilev from his homeland almost immediately after its invasion and annexation, the Russian investigators clearly hoped that Ukraine would lend a helping hand.

According to Dzhemilev’s lawyer, Nikolai Polozov, the three versions can all be found in the ‘file material’, but there is also a piece of paper, signed by the deputy head of the FSB [Russia’s security service].  This states that the request must under no circumstances be sent to Ukraine since this could harm the Russian Federation’s national interests.  So does everything about the so-called ‘trial’ of Mustafa Dzhemilev and Russia’s illegal Crimean land-grab, but there is certainly something novel about asking Ukraine to help in Russia’s political persecution of Ukrainians.

Polozov has reported other details from the first hearing in the ‘trial’ at the Russian-controlled Armyansk City Court (judge Venera Ulugbekovna Isroilova) on 23 July.  One may seem very obvious, but, it transpires, is not so.  In sending the case against Mustafa Dzhemilev to the court,  deputy prosecutor Sergei Bulgakov asked that the ‘trial’ be held in absentia.  This was allowed by the judge at the preliminary hearing without it being presented for discussion and without considering the position of the defence.  In such a form, the decision can only be challenged after a verdict has been passed.  Polozov is now seeking to have his written objections added to the case file.  Both international law and the Russian Constitution envisage that a defendant is present at a criminal trial.  There are, obviously, exceptions, which, since this is (illegally) a trial in accordance with Russian legislation, are covered by one article of the Russian criminal procedure code.  This is in exceptional circumstances when a person is accused of committing a grave or very grave crime and has been placed on the wanted list and is avoiding appearing in court.  If it is known where the accused person is, but the latter lacks the possibility of attending the trial, the proceedings should be suspended.

The ’trial’ is continuing regardless of the fact that everybody knows exactly where Mustafa Dzhemilev is, and that, even without the ban,  Russia would prevent him from crossing the administrative border into Crimea because of the pandemic.  In fact, they would stop him anyway. but this does not fall within the strict limits set out in Russia’s own legislation.

Most importantly, there is nothing to suggest that Dzhemilev has been placed on any wanted list.  Russia would be very foolish to apply to INTERPOL, since this is such a clearly political trial that any such application would be rejected.

Polozov explains that Mustafa Dzhemilev rejects all the three charges against him and considers them politically-motivated persecution due to his open rejection of Russia’s occupation of Crimea and his support for Ukraine’s territorial integrity.

His participation, via an intermediary, in such a lawless ‘trial’ is dictated solely by the need to record all such violations of human rights by the Russian occupation regime for later prosecution of the perpetrators in international courts.

As reported, Russia has now decided to bring three charges against Dzhemilev, who spent 15 years in Soviet labour camps for his defence of Crimean Tatars right to live in their homeland and of human rights in general.  76-year-old Dzhemilev, who has twice been nominated for the Nobel Peace Prize, is accused by Russia (under Article 322 § 3 of Russia’s criminal code) of having illegally crossed a non-existent ‘Russian state border’ in trying to return to his homeland, two months after it was invaded and annexed by Russia.  It is claimed that he, as “a foreign national” knew that he had been banned from entering “the Russian Federation”.  This illegal crossing was purportedly carried out “by a group according to prior conspiracy”.

There neither was, nor is, a ‘Russian state border’ to cross, since by Ukrainian and international law, backed by the UN General Assembly and all democratic countries, there was only the administrative border between the Kherson oblast and Crimea. Even according to Russian legislation, the charges are absurd since Dzhemilev had not been properly informed of the ban, and the FSB only established its illegal ‘border controls’ long after the attempted entry of Crimea at Armyansk on 3 May 2014.

Understanding the enormous respect that Dzhemilev enjoys among Crimean Tatars and other Ukrainians, as well as internationally, Russian President Vladimir Putin initially tried to woo him with promises.  He learned swiftly that both Dzhemilev, and the Mejlis, were totally opposed to Russian occupation and remained fully loyal to  Ukraine.  Dzhemilev had been enemy No. 1 for the Soviet regime, and now became the Kremlin’s top enemy.