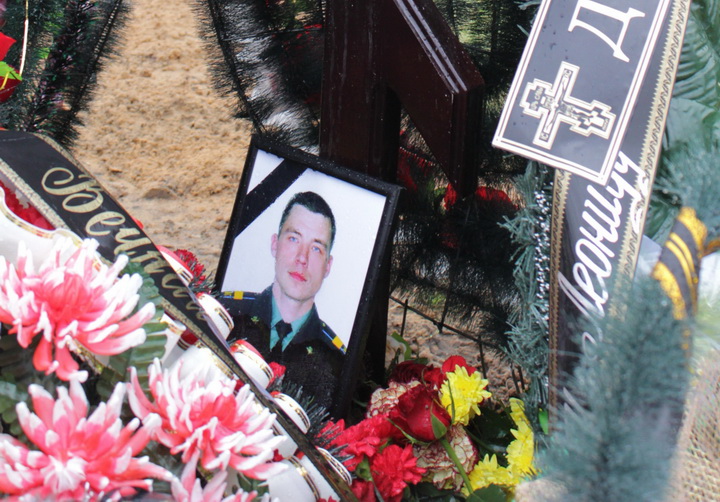 Leonid Kichatkin grave photographed by Lev Schlosberg. Soon all indication of who lay buried there was removed

The BBC’s Russian Service has tracked down several Russian military men who were almost certainly killed in Donbas, fighting a war that Russia is still claiming that it has nothing to do with.    One of the monuments they found confirms the death “in Ukraine” of a Russian paratrooper from Pskov, Leonid Kichatkin.  His death on 20 August 2014 was first reported by his wife and the independent media, but then resulted in violent attacks on journalists and a macabre attempt at denial, with a fake ‘Leonid Kichatkin’ and his ‘wife’ used to pretend that the soldier was not dead.

The BBC report is about “what the monuments can tell us when the state is silent”.  In fact, however, Moscow is not just silent, but actively silencing others, including the families of men killed in Donbas, while fighting in a war that Russia tries to present as ‘a Ukrainian civil war’.

Judging by the monument to military intelligence officers in Kaliningrad,  Russia’s secrecy began after its war against Georgia in 2008.  It is after this, anyway, that monuments like that in Kaliningrad give men’s names and dates of death, but not where they died.  Such secrecy applies also to cases where men were clearly killed in Syria.  These warrant separate attention since the Russian defence ministry is concealing only some of the deaths, not all.

The situation in Ukraine is quite different since Russia asserted from the outset that it had nothing to do with the conflict, and any men whose Russian nationality could scarcely be denied were claimed to be ‘volunteers’.  Russian soldiers captured on Ukrainian territory were supposed to have either ‘got lost’ or to have resigned from the military in the months before their seizure.

A monument in the centre of Kaliningrad has four names whose dates of death are given, but not where they were killed.  The three who were almost certainly killed in Donbas have been separately identified.  In 2016, the Conflict Intelligence Team (CIT] found the grave of  Captain Sergei Suslov in the Solnechnogorsk (Moscow region).  CIT named Suslov as a special operations officer, and noted that he was buried near the base of the Senezh special operations unit.  Suslov’s gravestone had the Senezh emblem on it.

There is nothing, either on his gravestone, or on the memorial in Kaliningrad, to indicate where Suslov was killed. He had, however, earlier received awards ‘For the reuniting of Crimea’ and ‘For courage’, and the posthumous award ‘For courage’ means that he was killed in action. Russia was not formally engaged in any military action on 14 June 2014, but an active battle was raging in Mariupol.  This is believed to have been the first of three major battles (together with Ilovaisk and Debaltseve) with heavy deployment of Russia military forces, and the secrecy around Suslov’s place of death is probably because he was killed in the first of those battles.

There are also the names with dates, but not place, of death of two other Russians: Sergei Fedchikov (14.07.2014) and Vadim Vasilevsky.(31.08.2014).  The BBC say that they were in the so-called ‘Wagner private military company unit, but how ‘private’ the latter is has always been in question.  At least one supposed Wagner unit fighter, Dmitry Avdiyenko obligingly boasted on  social media about the Russian state award he received for his part in the battle for the Luhansk Airport.  It is also hard to feel convinced by such ‘private’ status when the commander of the unit, Dmitry Utkin, nom de guerre ’Wagner’, was one of Russian President Vladimir Putin’s guests at a Kremlin reception to mark ’Heroes of the Fatherland Day’​ in December 2016.   Although the BBC points out that new names are sometimes added to monuments by local veteran organizations, the monument in Kaliningrad is in the centre of the city and it seems unlikely that the names of the four men killed in unidentified locations were not added by the authorities.

In Zaraisk (Moscow region), there is a monument to ‘Zaraisk residents killed in local wars and military conflict’,  This names, as a ‘Hero of Russia’, senior lieutenant Yevgeny Trunbayev, who died on 15 October 2014.

The BBC article reports that in December 2019 Trunbayev’s parents and the head of the local veterans’ council told schoolchildren during a lesson ‘on courage’ that Trunbayev had been the commander of an anti-tank unit of the 200th motorized brigade and had been fatally wounded in battle in the autumn of 2014.

They did not explain where the battle had taken place, with this information also missing on all monuments.

In January 2020, Ukraine’s SBU [Security Service] reported the arrest in Kharkiv of a former Ukrainian National Guard fighter Yuri Dontsov, asserting that he had been recruited by the Russian FSB.  The SBU believe that he was planning to blow up a former Ukrainian military intelligence officer, Hryhory Sivachenko with this commissioned by the Russian FSB to avenge the death of Trunbayev and several other Russian military instructors.

While monuments and gravestones, whether erected by the authorities or by local veteran organizations normally conceal incriminating information about military men being killed in countries that “Russia is not fighting in”, the BBC did come upon one bleep in Severoonezhsk in the Arkhangelsk oblast. On a stone under the title ‘Catastrophes; terrorist acts and other wars’, the last name is that of “senior sergeant Kichatkin, Leonid Yurievich, 20.08.2014 Ukraine”.

It is quite possible that the stone has already been removed by now, or replaced, with Kichatkin’s name erased. It would certainly not be the first time.  As reported, Kichatkin’s widow announced his death on 22 August 2014 on the VKontakte social network page.  By the following day, Novaya Gazeta found that the entry had disappeared and when they rang the number it had given, a woman who claimed to be Kichatkin’s wife insisted that her husband was alive, well and right next to her.  A man then took the phone and said that he was Kichatkin.

The Novaya journalist found Leonid Kichatkin’s newly dug grave in the Vybuty cemetery outside Pskov, with the photo being that seen on his wife’s VKontakte page. By the following day, it was reported that the names, as well as the wreaths and ribbons, had been removed from the graves of both Kichatkin and another paratrooper Alexander Osipov.  Four journalists, from Dozhd and Telegraf were also assaulted and threatened at the cemetery.

In June 2018, Irina Tumakova from Novaya Gazeta returned to Vybuty in the Pskov region.  Now, not only were the graves openly those of Kichatkin, Osipov and some others, but there were also huge obelisks over their graves, which she was told had been provided by the Russian defence ministry.  This alone is, of course, confirmation that they died ‘in action’.

Tumakova recalls other denials, including from the then commander of the airborne forces General Vladimir Shamanov.  He claimed that all the paratroopers were alive and well.  The journalist rang the same number as four years earlier.  A quite different voice answered the phone and asked Turmakova to please not ring again.  It was clear, the journalist says, that four years earlier, her phone had simply been taken away in order to stage a cynical stunt aimed at lying about Russian military deaths in Ukraine.

By May 2015, Putin had issued a decree classifying as secret information about Russian military losses during “special operations in peacetime”, thus potentially enabling prosecution and imprisonment for divulging details about the deaths of Russian soldiers in eastern Ukraine.

It also began clamping down on military servicemen’s use of the Internet which was providing hugely incriminating evidence about activities in Ukraine.  This was formalized by the beginning of 2019, see: Putin signs law to stop soldiers divulging proof for the Hague about Russia’s war against Ukraine