Lukashenko regime’s savagery may be backfiring in Belarus 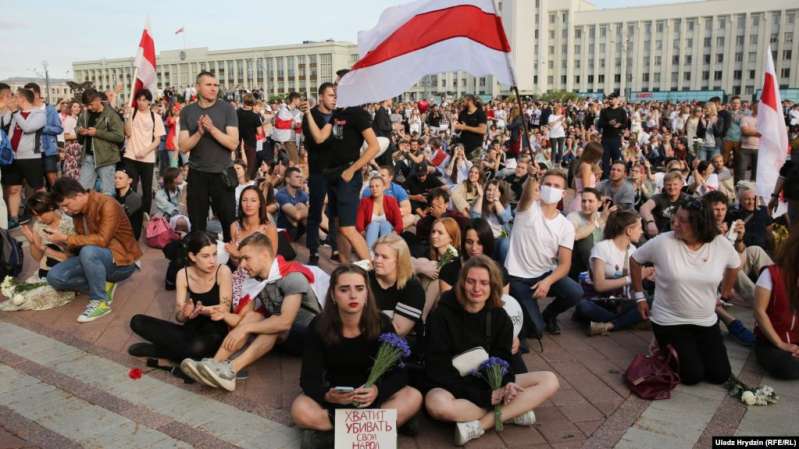 Ukrainian human rights activists Konstantin Reutski and Yevhen Vasyliev have been released from a Belarusian remand prison following their seizure on 12 August.  The two men are still in the Ukrainian Embassy in Belarus, so, for obvious reasons, their account must await their return to Ukraine.

Other people seized by the Belarus riot police and soldiers since 9 August and released on Thursday evening have spoken of horrific conditions in the detention units.  A doctor who was seized with colleagues when they tried to help victims of the riot police’s violence says that she herself, and seemingly other women, were not beaten.  Judging by the reports emerging, which have yet to be fully verified, men who have been released show signs of beatings, and these are almost certainly those chance passers-by, etc. whom the Belarusian enforcement bodies have admitted should not have been detained.  There are very strong grounds for concern that many of those peaceful protesters still imprisoned are being subject to savage beatings and torture.

It is probably true that on 29 November 2013, most Ukrainians expected the Euromaidan protests to fizzle out in a week or two.  Then came the savage attack by Berkut officers on mostly young students in the early hours of 30 November, and the mass protest in outrage the following day.  Belarus is not Ukraine, and any comparison would be foolhardy, however it does seem likely that the shocking savagery that the regime of Alexander Lukashenko has unleashed on peaceful protesters, including many teenagers, has backfired.  The appalling scene broadcast on state television on 13 August of young men and women swearing they would never come out in protest again was supposed to have propaganda value and instil fear.  It doubtless did the latter, but also aroused revulsion at a regime that had so obviously tortured and terrorised young kids. By 13 August Belarus was back in the world headlines, due both to the brutality of the attempted crackdown and to the mounting protests throughout the country.  For the moment, it seems that huge numbers of Belarusians are refused to be cowered into submission.

Medical staff on 13 August.  The sign reads "Stop the bloodshed"

The riot police also seem to have been, if not deliberately targeting journalists, then certainly not distinguishing between them and protesters. The Belarusian Association of Journalists report that 88 journalists have been detained since the elections on 9 August, with 23 still in detention.  At least three deaths have been reported and over seven thousand people have been detained, with many of them seemingly grabbed indiscriminately although they were not protesting.  The reports, backed by images of those who have been released, suggest that the conditions are horrific and that a large number are being subjected to torture. 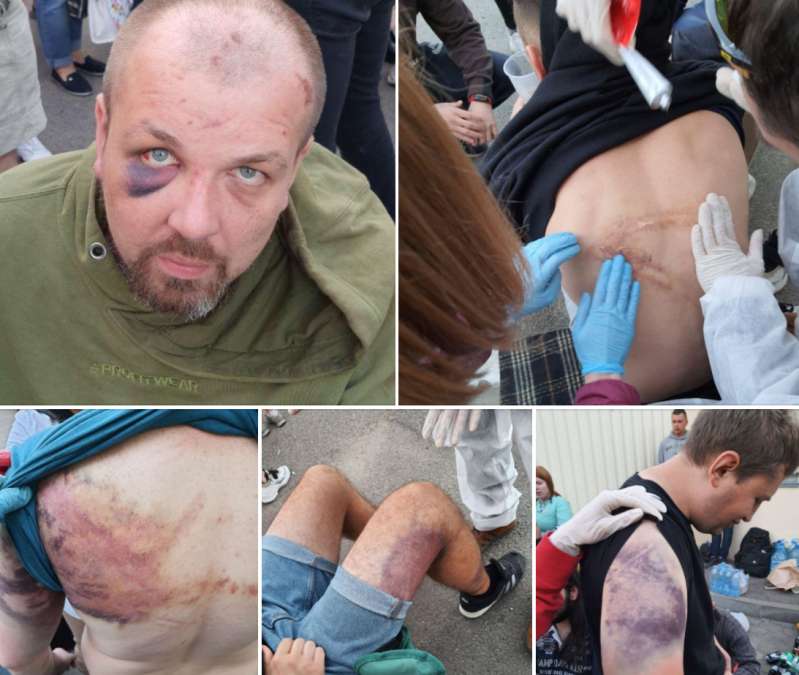 The releases on Thursday evening and Friday morning came after the head of the Interior Ministry Yuri Karayev admitted that people uninvolved in the protests had been seized and “apologized”, promising that they would be released.  The savagery on 9 and 10 August was so ostentatious that such an apology must indicate a certain nervousness.  Although calls in the West for tough response have been mounting, for the moment the reaction is essentially only in words, so if Aleksandr Lukashenko and his henchmen are getting twitchy, it is because of the protests inside the country.

While there has been no mass refusal by OMON riot police or internal forces soldiers to take part in the violence, there have been a number of police officers and soldiers who have publicly removed their uniforms.  One serviceman stated: “I was proud to serve.  Now I’m ashamed.  This is a disgrace”.  At least one police captain, Yegor Yemalyanau from Novopolotsk, was detained after he posted his police ID and chevrons, stating “17 years of service have ended. My conscience is clean. The police are with the people”.

Several journalists working on state television have resigned. The question in such cases is always how it was that they served an authoritarian regime’s propaganda machine for so long, nonetheless, they appear to have decided now that a red line has been crossed.

On Wednesday and Thursday medical staff from at least one Minsk hospital came out in protest at the violence.  Earlier on Thursday, there were reports that a doctor had been detained.  Later on Thursday, medical staff next to the medical university, were out in protest, with signs reading: “You tie us up, and who will save you tomorrow?”. “For a clear conscience”; “Nobody’s directing us” and “Stop the bloodshed”.

It is difficult to know whether there really was such a pronounced difference on Thursday, or whether it was just that the regime seems to have finally stopped trying to block the Internet.  The numbers of protesters had certainly seemed much lower on Tuesday and Wednesday. Lukashenko was probably hoping that the terror tactics used to force his rival, Sviatlana Tsikhanouskaya to leave for Lithuania had worked to disperse the opposition.

By Thursday, it was clear that this is not the case.  It is just possible that it has also had the opposite effect, and spontaneous protests seem to be increasing throughout the country, including among workers in various factories and institutions who have all gone on strike. Such protests are far harder to predict and therefore to easily crush.

While the savage treatment by the riot police and arrests of large numbers of people were clearly supposed to deter people, they do not seem to have worked.  In Zhodino, for example, a huge crowd was asked to raise their hands if they voted for Lukashenko.  There were boos and the only visible raised hands appeared to be trying to photograph the crowd.  There was then a surge of hands raised of those who had voted for Tsikhanouskaya, with the crowd chanting “Sveta” (from Tsikhanouskaya’s first name).   There does not appear to have been any sign of the riot police and soldiers.

The first such grassroots protest was seen in the ‘chain of solidarity’ in Minsk on 13 August, in which women, holding white flowers, stood in solidarity with the protesters and in opposition to the violence.  Since then there have been more such ‘solidarity chains’ and ‘solidarity marches’, seemingly in many cities.  The videos posted by NEXTA and TUT.BY show large chains along main roads, with huge numbers of cars tooting their support.

The state authorities had tried to claim that the protests are organized by ‘criminals’ and foreign elements, making such demonstrations of solidarity by ordinary women of different ages, waving white flowers such a potent symbol of the true – non-violent – nature of the protests.