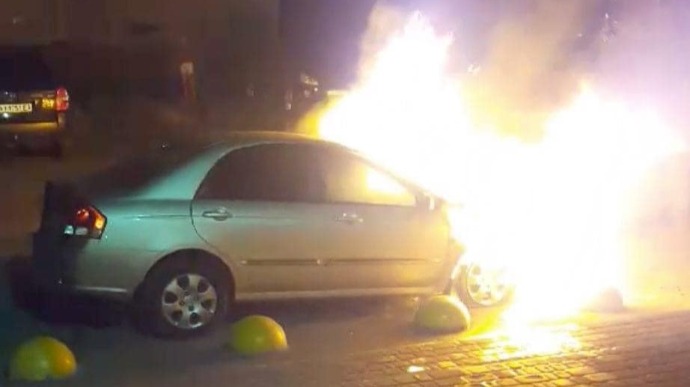 The car used by the Skhemy Corruption in Action team of investigative journalists went up in flames just after midnight on 17 August, with the Department of Emergencies having effectively confirmed that the fire was almost certainly set deliberately.  This attack comes just days after a Skhemy journalist discovered evidence of surveillance equipment in his home and several months after one rather notorious politician published personal date about Skhemy journalists and one of their drivers.

The car in question belongs to the Skhemy driver, Boris Mazur, but is referred to as the Skhemy project’s car. It was parked outside Mazur’s home in Brovary (Kyiv oblast), with neighbours initially trying to extinguish the flames before the fire brigade arrived.  The investigators noted what appear to be the remains of an inflammatory substance on one of the front wheels of the car, and have sent it for analysis.

Skhemy Corruption in Details is a joint project run by Radio Svoboda (RFERL) and UATV-1 (Ukraine’s public broadcaster) which, over recent years, has exposed eyebrow-raising wealth by Ukrainian judges, prominent politicians and members of the enforcement bodies and much more.  The targets of such scrutiny undoubtedly find it very inconvenient, especially since they can’t shout defamation since they could not prove this in court.

Late last year, Andriy Portnov, the former First Deputy Head of President Viktor Yanukovych’s Administration began an aggressive offensive against Skhemy over their investigation into his believed links with people in government.  On 31 October 2019, Portnov published personal data of the driver for a Skhemy filming crew, and threatened to continue doing so with respect to other members of the team.  On 2 November, he published three more car numbers, which he claimed were linked with Skhemy journalists. He also accused Radio Svoboda (the Ukrainian Service of RFERL) of ‘megalomania’ and of circulating inaccurate information.

Portnov is a lawyer with considerable experience of filing, and often winning, law suits.  He had legal avenues he could have taken against the journalists if they had been circulating inaccurate information.  Presumably he had reason to instead rely on threats and illegal divulgence of personal data.

He did not choose to explain why he was not using the legal avenues at his disposal in the case of false information.

Skhemy and the lawyers they consulted considered that Portnov was in in direct breach of both Ukraine’s Personal Data Act and the Criminal Code. Portnov reacted to the Skhemy statement by issuing new threats to divulge personal data on his Telegram page.  His message was menacing, with him threatening that the next time he would act “even more clearly and creatively” and leaving no doubt that he would divulge not merely car numbers and addresses, but also “biographies”.  He also invited others to behave in the same way with respect to what he again claims, without providing any evidence, is “unlawful activities”.

While careful not to make unwarranted accusations, Skhemy journalist and presenter Natalia Serdletska noted that the police had even initiated a criminal investigation over Portnov’s offensive, although it did not appear to be moving.  She adds that last Friday, 14 August, had published the following words: “the marginal Radio Svoboda – I am continuing a collection of educational measures”.

President Volodymyr Zelensky reacted very swiftly to news of the arson attack, recalling that he himself had faced such an attack in December 2014, and insisting that, under his presidency, he would not allow any criticism of the authorities to result in persecution or intimidation.

Zelensky’s comments were doubtless prompted by his criticism of Skhemy after their probe into his apparently holiday in Oman in February 2020, at the same time as a high-ranking Russian official.  While the sentiments he now expresses are excellent, there have been a spate of attacks or  threats against journalists in recent months, without any serious evidence of measures being taken.

On 8 August 2020, Mykhailo Tkach, one of the Skhemy journalists, reported finding evidence of an attempt to hide a surveillance device in his apartment.  He also said that, over several weeks, he had on a number of occasions received warns that his journalism was irritating high-ranking officials and that they were beginning to active work on him. Eight experts in the field were later unanimous in agreeing that the three holes found did point to signs of such an attempt, though they disagreed as to whether the device had not yet been installed, or had been taken away already.

On 11 August, Tkach lodged a formal complaint against the police who had done nothing to investigate his earlier report and had not brought special equipment to check whether such surveillance had been installed and taken away, or planned.