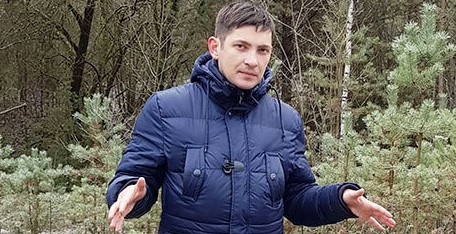 A volunteer search group in Belarus has found the body of 29-year-old Kanstantsin Shyshmakou (or Konstantin Shishmakov), the director of a military history museum in Vawkavysk who refused to sign a falsified electoral protocol claiming that Aleksandr Lukashenka had won the presidential elections.   His body was found in a river, with the investigators asserting that their preliminary assessment is that his death is not of a criminal nature.  Since Shyshmakou disappeared the first day after returning to work following his refusal to participate in falsifying the elections, it seems unlikely that this will be believed.

Konstantin’s father, Andrei Shyshmakou contacted TUT.BY on 16 August, saying that “it all began on 9 August” when his son, and another member of the electoral commission, refused to sign the electoral results protocol.  He told his family that the document had, in any case, been signed for them.  They had been offered a car that would take them home, but had refused, saying: “We have nothing to be ashamed of, we’ll make our own way”.  He called his son a man with principles.

Shyshmakou was on leave until Friday.  Saturday (15 August) was a working day for the museum, and was his first day back – and his last.  At the end of the day, around 17.00, he rang his wife, saying that he would not work there any longer.  Some of the reports add that he said he was on his way home, although his father on 16 August said only that his son had disappeared after that call.

It may be, in this case, that the young man was driven to kill himself, rather than murdered, but there is little chance that any official account will be believed.  There have already been several deaths which the enforcement authorities have acknowledged, while in at least one case lying about the cause.  Video footage, published by Associated Press, make it clear that Aleksandr Taraykouski was shot and killed and did not, as claimed, die from an explosive device that he was carrying.  There are also a lot of people whose whereabouts are still unknown.  Although some of the almost 7,000 people detained have been released, a huge number are still imprisoned.  Those freed have given shocking accounts of the torture, that even a 14-year-old boy was subjected to.  David was held – and savagely beaten – in military barracks, together with a huge number of other people, including his stepfather, Denis.  It seems that the family were not actually taking part in protests, however all were seized in Brest on 10 August.  David’s mother Inna was soon freed, but ignored when she tried to get them to release her son, who is still a child.  She was eventually forced to sign a document saying that he had been at a protest, and that there were ‘complaints against the OMON riot police’.  David was held in detention until very early on 11 August.  His stepfather was released only on 16 August, badly beaten.

Novaya Gazeta published a video taken outside the Belarusian SIZO or isolation unit on Okrestina St in Minsk during the early hours of 13 August.  You can the screams and moaning of those clearly being tortured.

All of this has been recorded many times over recent days, with the international media, for a change, given coverage to the protests.  Even on 17 August, there was a sense of euphoria as more and more people came out in protest and whole factories, offices, etc. went on strike, demanding real elections.

The protests are continuing, but Lukashenka is making it very plain that he has no plans to relinquish power.  On Tuesday, he ‘honoured’  enforcement officers involved in the savage brutality against peaceful protests, and he is certainly threatening to bring in (more) troops.

In Ukraine, one Maidan activist spoke of Belarus having achieved in one week what it took the Euromaidan protests three months to do, however as of the evening of 18 August, that is still not clear.  Lukashenka’s ruthless imprisonment;  forced disappearances and killings of his opponents go back 20 years, and even without the very likely assistance that Russia’s FSB (at least) will be providing, he still has the means to cause terrible bloodshed.

On 19 August Henadzi Shutau from Brest died after being shot on 11 August.  He was 43 years old.

According to Franak Viačorka, a political analyst from Minsk, Shutau was the fifth officially confirmed victim.  Seventy people are missing.