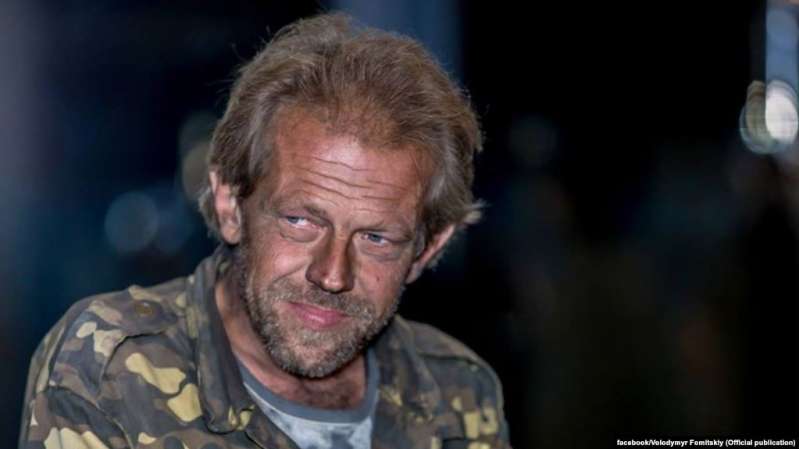 Volodymyr Fomitsky, a former volunteer soldier from Kryvy Rih, and his lawyer have filed a legal suit for compensation from the Russian Federation over his imprisonment by Russian soldiers following the Battle of Ilovaisk in late August 2014.  Since a court in Ukraine has no realistic chance of extracting compensation from Russia itself, Fomitsky has named as co-respondent Sberbank, a bank registered in Ukraine, with Russian owners.  It is to be hoped that his application to the European Court of Human Rights will also be successful, but this was filed on his behalf by the Ukrainian Helsinki Human Rights Union back in 2015, and the Court is, unfortunately, in no hurry to consider it.

Fomitsky, who is now 59, had volunteered for duty as soon as the war began in 2014, and was in the Kryvbas Battalion, made up of older volunteers like himself. He and comrades arrived at the Pokrovka stronghold, seven kilometres from Ilovaisk on 9 August.  He recalls that there was shelling several times a day, however this changed significantly from 22 August 2014, becoming much more intense and also more targeted.  Up till then, the shelling had been in their direction, but not at all accurate. From 22-24 August, the shelling was already aimed at their positions, with a lot of men injured.  The Ukrainian soldiers were certain that they were now dealing with professional Russian military men.

Until then, it was being widely reported both in Ukraine and abroad that Ukraine’s Armed Forces were on the verge of defeating the Russian-armed militants – made up of Russian mercenaries and local fighters.  It was the influx of both heavy equipment and trained Russian military men that changed the course of the war.

Ukraine’s Prosecutor General’s Office has just released a report asserting that the only reason for the tragic events at Ilovaisk was Russian military aggression.  It says that during the night from 23 to 24 August 2014 there was “the most major direct invasion by armed forces of the aggressor state on the territory of Ukraine and the further committing of war crimes. At that moment, the Russian armed forces were made up of nine battalion-tactical groups; 3,500 personnel; up to 60 tanks; up to 320 armoured vehicles; up to 60 cannons; 40 mortar weapons and five anti-tank missile units”.

The Ukrainian soldiers were outnumbered, the study found, by 1 to 18; with heavy military equipment and arms similarly outweighed.

Fomivsky and his comrades were among the Ukrainian soldiers treacherously shot at while trying to retreat via a supposed ‘green corridor’ which followed Russian President Vladimir Putin’s so-called  ‘Appeal to the insurgents of Novorossiya’ in the early hours of 29 August 2014.

Unlike many others, they at least survived, but were forced to surrender later, in Novokaterynivka, with Fomivsky reporting that they were approached by lieutenant Grekov, from the Russian SOBR (Special Rapid Response Unit within the Russian National Guard).  He says that the man actually produced ID. ‘Varyag’, was definitely Russian, Fominsky cannot be certain about others.

The men were allowed to make a phone call to tell family that they were alive before the batteries were removed from their phones.  The conditions they were held in were intolerable, with no medical care for those clearly needing it.

He was released in the third party of POWs to be released, after ten days.  He almost immediately approached the Ukrainian Helsinki Human Rights Union, but, as mentioned, that application to the European Court of Human Rights has been sitting, awaiting consideration, for five years.  It is for this reason that members of a Kryvy Rih association of veterans decided to approach a Ukrainian court.  An initial refusal to take on the suit was successfully challenged in a court of appeal by lawyer (and fellow veteran) Dmytro Chernesh.  The preliminary hearing took place on 28 July in the Dovhyntsivsk District Court, with the next hearing, in which a representative of Sberbank is due to participate, has been scheduled for 19 September.

In speaking with journalists after the hearing, Fomivsky explained that they have around 200 pages of material, containing testimony of Russia’s military aggression, proof that he was held prisoner by Russian paratroopers and general documents confirmed that he was in captivity. “I lodged the suit against the Russian Federation for the damages that it has inflicted, through its aggression, upon us. We are adding Sberbank of Russia as co-respondent in order to have a realistic chance of receiving that material damages and to force them to close in Ukraine and not work here any longer”.

Fomitsky is among the many Ukrainian soldiers and others who have provided vital testimony regarding Russia’s direct and major military engagement in the fighting at Ilovaisk.

It should, however, be stressed that it is not only Ukrainian soldiers who speak of Russian military involvement.   In the days up to 22 August 2014, Polish television was showing the movement of Russian military trucks to the Ukrainian border virtually every day.  On 18 August, for example, TVN 24’s correspondent in the Rostov oblast (Russia), not far from the border with Ukraine, stood with his cameramen videoing Russian armed personnel carriers, artillery and anti-aircraft weapons turning onto a road leading to the border.  See: Artyleria, wozy opancerzone i broń przeciwlotnicza. Ruchy Rosjan przed kamerą TVN24  (4 clips). The next day, 19 August,  the same journalist reported that the road leading to the border has been blocked since morning by an endless stream of Russian tanks carrying equipment, etc.

On 22 August, NATO officials were reported to have said that the Russian military had moved artillery units manned by Russian personnel inside Ukrainian territory and

The first reports of such heavy Russian military involvement coincided with information about the first Russian military casualties in Russian independent media (see: If Russia is not at war, then who is in those freshly-dug graves?  and Entire Pskov paratrooper regiment killed in Ukraine? ).

While Russia has gone to enormous lengths to conceal all military deaths in Ukraine, the graves often reveal the truth.  See:

Russia’s denial of involvement has also recently been undermined by intercepted telephone calls and witness testimony gathered by the Joint Investigative Team investigating the downing by a Russian BUK missile over Ukraine of Malaysian airliner MH17. Several calls demonstrate direct contact between the nominal leaders of the so-called ‘Donetsk people’s republic’ and Russian government and military officials, as well as the Russian FSB [security service].  In one conversation from 3 July 2014, Borodai can be heard stating that he is “carrying out orders and protecting the interests of one and only state, the Russian Federation’.

The JIT’s findings, as well as other evidence, are important for current and potential proceedings in international courts, including Ukraine’s case against Russia at the UN’s International Court of Justice.