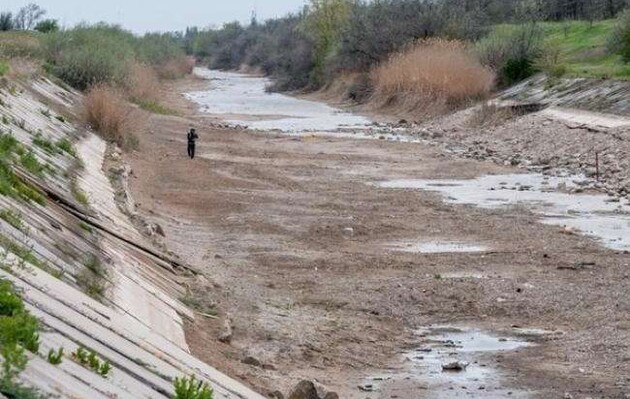 After violating international law and flouting the United Nations General Assembly by invading and annexing Crimea, Russia is now planning to complain to that same United Nations because Ukraine is not providing occupied Crimea with water.  Nor is this the first time that Russia, which has turned Crimea into a military base and is persecuting Ukrainians for their political or religious views, is claiming that it is Ukraine which is violating human rights and somehow responsible for a ‘humanitarian crisis’.

As far as water is concerned, there is no such humanitarian crisis, although the lack of rain this year has meant that the occupation authorities are bringing in some restrictions on water consumption.  Nor, in fact, is there a ‘water blockade’, which is another term that the Russian occupation regime is pushing.  Mainland Ukraine always provided the Crimean peninsula with around 85% of its water supplies, but stopped doing so in April 2014, shortly after Russia’s annexation.  Were it to reinstate the supplies, it would be effectively legitimizing Russia’s occupation – a terrible betrayal of all Russia’s Crimean Tatar and other Ukrainian victims and a move that could well be used by other countries as justification for removing sanctions imposed over the invasion.

According to the Geneva Convention, it is Russia, as occupying state, that bears full responsibility for all that happens on occupied territory, and for all such requirements, as water and food.  Russia needs Ukrainian water for its military and industrial needs and has, at least until recently, done little to maintain the infrastructure required to ensure that rainwaters were not wasted.  Moscow was, presumably, always counting on using political pressure or even military aggression to force Kyiv to back up its occupation regime.  Although there have been alarming statements from some Ukrainian politicians over the last year, Kyiv is for the moment adamant that there can be no renewal of water supplies before Russia ends its occupation.

There have, however, been suggestions, most recently from Prime Minister Denis Shmyhal and former Ukrainian President Leonid Kravchuk, that this could change “in the case of a humanitarian crisis”, with this doubtless one of the reasons that Russia is seeking to convince the world that “Crimea” is facing such a crisis.

The Russian state-controlled RIA Novosti reported on 30 August that “experts” in occupied Crimea  will be preparing and sending a complaint to the UN Human Rights Committee over, what is described as “the closing by Ukraine of the North Crimean Canal and the organization of a water blockade of the peninsula”.  This is for the 45th Session of the UN Human Rights Committee, scheduled for September, which is due to hear a report by Yelena Dovhan, a representative of the Belarusian regime which is currently engaged in the brutal suppression of peaceful protests against rigged elections. Dovhan will be talking about “the right to safe water, sanitary services, the right to develop, and also the influence of sanctions on human rights”.  Alexander Molokhov, the Kremlin-loyal Crimean head of the committee preparing a report, says that they hope “that issues worrying Crimeans, like the water blockade, the unfairness and illegality of sanctions, will be reflected in these special reports”.  He asserts that “the cannibalistic position of Ukrainian radicals on this issue should be subjected to total obstruction in the international arena, including by Russian delegates”.

While it is easy to predict the manipulative attempts that Russian delegates will make to turn this issue on its head, it seems unlikely that the UN Human Rights Committee, which is currently considering Russia’s brazen attempts to crush the Ukrainian Orthodox Church in Crimea will be convinced.  Nor should others.

Russia as invader and occupying state is now trying to claim that Kyiv should provide it with water to enable it to continue violating human rights and creating a military zone with defence implications for all of Ukraine, and Europe.  With typical cynicism it is trying to achieve this by citing human rights and a ‘humanitarian crisis’.  Shmyhal’s second statement about a possible “humanitarian crisis” in August this year provoked a succinct response from Refat Chubarov, the leader of the Mejlis, or self-governing body, of the Crimean Tatar people, whom Russia banished from his homeland and has now ‘put on trial’ in his absence.  The humanitarian catastrophe in Crimea has been going on now for over six years, and will end when Russia is forced to leave Crimea.

Chubarov and others have also drawn attention to the reasons for the current situation in Crimea, which was always able to provide enough water for domestic use.  Russia is illegally seeking to change the ethnic makeup of Crimea, by using methods of repression to drive ethnic Ukrainians and Crimean Tatars from their home.  It is instead creating new buildings and other structures for the military and enforcement officers whom it is bringing into Crimea.  Renowned film director Akhtem Seitablayev believes that the shortage of drinking water is directly linked with the massive increase in the number of Russian military bases.  He believes that the vast majority of the water is not being used to provide for ordinary Crimeans’ needs, but for the military units popping up everywhere. There was a huge reservoir near Bakhchysarai, he notes, that is now almost empty.

The occupation regime cannot admit that it is bringing in restrictions because of the military requirements, and is now deploying its propaganda machine to claim that there is a humanitarian crisis of Ukraine’s making.  In fact, it is Russia’s occupation that severed the organic bond and the water flow between mainland Ukraine and Crimea, and it is Russia’s militarization of the peninsula that is exacerbating the problem for ordinary Crimeans.