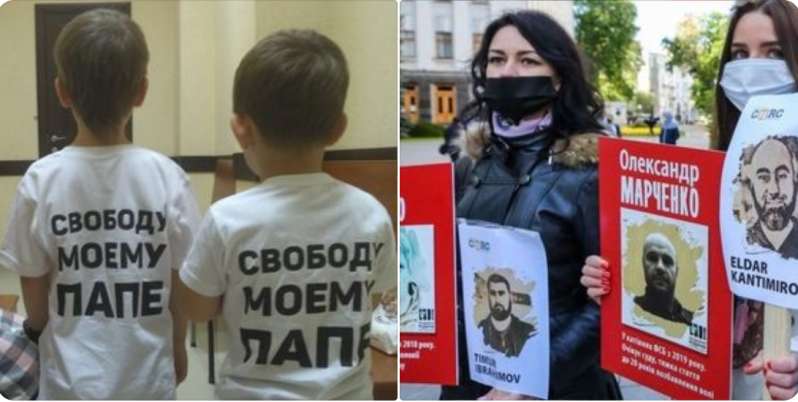 It is almost exactly a year since Russia finally freed Ukrainian filmmaker Oleg Sentsov, 24 prisoners of war and 10 other political prisoners in an exchange almost certainly aimed at getting important MH17 witness and likely suspect, Vladimir Tsemakh, out of the reach of the Dutch prosecutor.  At the time, Ukrainian President Volodymyr Zelensky was full of optimism that other political prisoners would shortly be released.  He and his people are continuing to make assurances, but Archbishop Klyment, Head of the beleaguered Ukrainian Orthodox Church in Crimea is not alone in believing that the subject of such releases “has been buried”.  Not only is there no sign of progress, but there is little or nothing to suggest that any efforts are actually being made.  This is while Russia has imprisoned as many Ukrainians on politically motivated charges or for their faith in occupied Crimea as the number of political prisoners freed on 7 September 2019.

As well as largely futile efforts to get Ukraine’s leaders to meet with them and discuss tangible measures, the Association of Relatives of the Kremlin’s Political Prisoners have also turned to the diplomatic missions of Ukraine’s western partners. On 24 August, Petro Vyhivsky, whose son Valentin Vyhivsky has been imprisoned in Russia since September 2014, passed on an appeal to Germany’s Minister of Foreign Affairs, Heiko Maas.

The authors of the appeal note that over the past two months, Andriy Yermak, the Head of the Office of the President, has twice spoken of a possible exchange of prisoners which could take place in the near future.  How can you get used to the bitter disappointment when such assurances come to nothing?  The same is true of the President’s upbeat words back in winter that the public would soon learn the names of those released in a new exchange.  Six months have passed since then, and no news at all.

“The families are worried that since the release of well-known political prisoner Oleg Sentsov and the Ukrainian seamen in September last year, that the question of the return of Ukrainians illegally held in Russia has virtually vanished both from the agenda of the Ukrainian authorities, and from that of the international community”.

The appeal was specifically aimed at asking the Germany Foreign Ministry to help get the subject of the release of political prisoners on the agenda of the meeting in the Normandy format which had been scheduled for 28 August .  That meeting was, however, cancelled, seemingly by the Russian side and there is nothing to indicate when the next meeting will take place.

In the meantime, arrests are continuing, with over 100 political prisoners now held in occupied Crimea and Russia.  This number can only increase while Crimea remains under occupation, as Russia is clearly using the persecution to try to drive Crimean Tatars and ethnic Ukrainians out of Crimea, and for show trials aimed at claiming that Ukrainians are carrying out sabotage and / spying for Kyiv in occupied Crimea.

Although Russian President Vladimir Putin was clearly concerned to get the MH17 suspect out of the way, in case he revealed incriminating details about Russia’s role in the downing of Malaysian airliner MH17, it is likely that he hoped the release of Sentsov and several other prominent political prisoners would silence the international community.

It was a cynical, and partially justified, calculation.  There was a huge international campaign to secure Sentsov’s release.  Despite the filmmaker’s own efforts, that campaign has not been rechannelled into getting the release of other political prisoners.

There really is no need to wait for a major campaign to be initiated.  Some acts of support and solidarity need only the Internet.   You can use Twitter or social media to circulate information about political prisoners and make calls to government representatives in your country, the EU, etc. to demand their release in the face of the grave threat posed by Covid-19.

Write to the men!  Russian FSB and other ‘investigators’ spend a lot of time trying to convince political prisoners that Ukraine has abandoned them, that nobody knows what they are going through, nor cares.  Even if it’s hard to write in Russian, your very letters will demonstrate that this is not the case.

The most urgent need for action is in those cases where men’s lives are in danger.

Details can be found and circulated here about 58-year-old Dzhemil Gafarov.  He is suffering from a condition that, even according to Russian legislation, should have precluded his detention.

There are similar concerns about 55-year-old Volodymyr Dudka who, together with 44-year-old Oleksiy Bessarabov, was sentenced to 14 years after a grossly falsified trial (See: 14 year sentences for Russia to present Ukraine as the enemy in occupied Crimea )

The list below is very long but please do not be overwhelmed, and simply choose one or more political prisoners – however many you or your group think would be realistic to write to or whose cases you could publicize.

ANY help in making these cases known and in giving the prisoners moral support is important!