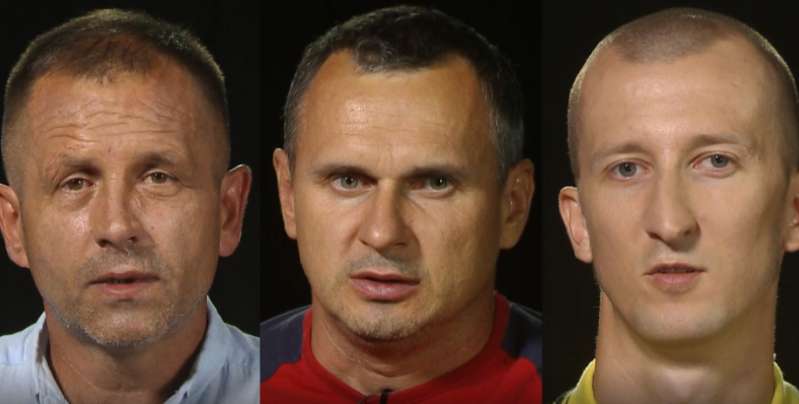 On 7 September, exactly one year after Russia released 24 Ukrainian POWs and 11 political prisoners, three of the men: Oleg Sentsov; Oleksandr Kolchenko and Volodymyr Balukh have addressed moving words of support in Ukrainian, Crimean Tatar and Russian to the over 100 Crimean Tatars and other Ukrainians whom Russia is showing no intention of releasing.  Each of the three men learned only too well how “hard it is to wait, with almost no hope of release”.  They assure those who remain in captivity that the struggle for their release will continue until all are freed, and that none is forgotten.

We know from the accounts of all released political prisoners how important letters are as proof that the FSB and Russian prison staff who try to convince them that “Ukraine has abandoned them” are lying.

A year ago, President Volodymyr Zelensky was very upbeat about how this was the first of a series of exchanges.  As far as Russia’s political prisoners are concerned, there have been no releases since.  While criticism can certainly be directed at Ukraine’s leaders, the main problem is finding levers when the Kremlin has so obviously used political prisoners as hostages and demanded huge ransoms.  Russian President Vladimir Putin has no interest in ordinary Russian mercenaries or petty thugs hired to kill in Donbas, or cause trouble in other parts of Ukraine.  If they get caught, they’re on their own.  The main three exchanges of Ukrainian political prisoners since Russia began its aggression against Ukraine have been for a high price.  In 2016, former military pilot, MP and Parliamentary Assembly of the Council of Europe deputy, Nadiya Savchenko was exchanged for two Russian military intelligence officers – Yevgeny Yerofeyev and Aleksander Aleksandrov - whose capture in Donbas provided important evidence of Russia’s undeclared warfare against its neighbour.  In October 2017, in an arrangement including Turkey, Russia freed Crimean Tatar Mejlis leaders Akhtem Chiygoz and Ilmi Umerov, almost certainly in exchange for two Russian state-employed killers - Alexander Smirnov and Yury Anisimov – arrested in Turkey on charges of spying and a political killing.

Although much had earlier been made of the Kremlin’s wish to secure the release of notorious propagandist Kirill Vyshynsky, it was almost certainly Putin’s need to get MH17 witness / suspect Vladimir Tsemakh out of the clutches of the Dutch prosecutor that led to the release of Sentsov, the Kremlin’s most famous Ukrainian political prisoner, and 10 others, as well as of the 24 POWs (whom Russia had been ordered by the International Tribunal for the Law of the Sea to free (see: How can Russia deny responsibility for MH17 when it gave up Sentsov, others to get key witness out of Ukraine? ).

The vast majority of Ukrainian political prisoners have Russian citizenship, essentially because Russia has made it virtually impossible to live and work in occupied Crimea without it.  Such coercion is in direct violation of international law, and there can be no good excuse for not releasing well over 100 Crimean Tatars and other Ukrainians imprisoned on politically motivated charges or for their faith.

Pressure from the West could serve instead of ransom, but for this, western leaders, governments and media need to be reminded of the plight of individual Ukrainian hostages.

The following are only a small percentage of the overall number of political prisoners, but all of them (are among a greater number who) have been imprisoned for four years or longer.  Please follow the links for details on how to write to them, and help by lobbying your elected representatives to speak out on their behalf.

Vyhivsky was abducted from occupied Crimea in September 2014, taken to Moscow and horrifically tortured, while held incommunicado for around 8 months.  He did not have an independent lawyer until after he agreed, under the FSB’s “methods of persuasion”, to admit to bizarrely fluid ‘spying’ charges and was sentenced to 11 years’ imprisonment.  He is being held in virtually total solitary confinement.

At 63, Shur is one of the oldest of the political prisoners and is one of at least three men, together with Vyhivsky and Mykola Shyptur, who have been imprisoned since 2014, when being Ukrainian was essentially enough for men to be seized and then imprisoned on mystery ‘spying’ charges.  Viktor Shur turned 63 on 10 March, his sixth birthday in Russian imprisonment.  In Shur’s case, he appears to have been sentenced to 12 years for a photo of cows grazing at a disused aerodrome in the Bryansk oblast.

The young father of three is one of the first four Crimean Tatars to have been arrested and imprisoned on fatally flawed charges of involvement in the peaceful Hizb ut-Tahrir movement which is legal in Ukraine.

The case was entirely based on ‘kitchen conversations’ about religion and politics (including Russia’s occupation of Crimea).  It was so obviously trumped up that the judges in Rostov (Russia), while not mustering up the courage to acquit the men, passed the minimum sentences possible and changed Zeytullaev’s charge to the lesser one of ‘involvement’ in a Hizb ut-Tahrir group, not ‘organizing’ it.

The FSB needed an ‘organizer’ for their paperwork, and essentially forced through a so-called ‘retrial’ with the judges that time buckling under and sentencing him to 15 years.

Kolomiyets has been imprisoned in Russia since 2015 on extraordinarily cynical charges, effectively for having taken part in Ukraine’s Revolution of Dignity (or Euromaidan).  He was seized in

The anniversary must also be bitterly poignant for Andriy Kolomiyets, a young Ukrainian sentenced by a Russian-controlled court to 10 years’ imprisonment for being on Maidan in 2014.  Just 22 when arrested, he had been living in the Northern Caucuses (Russia) with his partner (now wife) Galina and her children.  He was seized and taken to occupied Crimea.  There two former Berkut officers, who betrayed their oath to Ukraine, claimed that he had, in Kyiv, on Ukrainian territory and under Ukrainian legislation, at a time when all three held only Ukrainian citizenship, “caused them pain” by throwing a Molotov cocktail.  There was no record of such ‘pain’, yet Kolomiyets was charged with ‘attempted murder’, and is still serving a horrific 10 -year sentence.

Kuku, the son of a veteran of the Crimean Tatar national movement, was the first Crimean Tatar human rights activist to be targeted in Russia’s use of ‘Hizb ut-Tahrir’ conveyor belt ‘trials’.  The fact that he had already faced an attempted abduction and considerable FSB harassment before these new charges meant that his case was taken up by Amnesty International and other rights groups.  In fact, there seems every reason to consider all six men:  Muslim Aliev; Inver Bekirov ; Refat Alimov ; Arsen Dzhepparov ; Emir-Usein Kuku and Vadim Siruk prisoners of conscience, and they are all recognized as political prisoners by Memorial HRC.

Kuku was sentenced to 12 years’ maximum security imprisonment, the other men to sentences from 7 to 19 years without any crime at all.

Dudka, a retired naval captain who had recently become a grandfather, and academics Bessarabov and Dmytro Shtyblikov  were seized in occupied Sevastopol in November 2016 as part of Russia’s second attempt to concoct a ‘Ukrainian saboteur’ show trial.  All three men were tortured, with Shtyblikov also prevented from seeing an independent lawyer.  There was no evidence for the charges against the men, yet all three men are imprisoned in Russia, with Dudka and Bessarabov receiving particularly shocking 14-year sentences in reprisal for their refusal to confess to crimes they never committed.

The above are not the only Crimean Tatar and other Ukrainian political prisoners who have already been imprisoned for as long or nearly as long as the men released a year ago.  Since the exchange on 7 September 2019, Russia has seized and imprisoned at least as many Ukrainians as were freed that day.

(see The price of PACE capitulation to Russia: Soaring number of Crimean Tatar and other Ukrainian political prisoners )