Freedom House report shows OSCE monitored elections in occupied Donbas would be a farceUnderhanded agreement for direct dialogue with Donbas militants is a red line Zelensky promised not to crossUkraine may wake to find Zelensky has capitulated to Russia on water to CrimeaStark warning that Russia could use military force to get water for occupied CrimeaUkraine will give Crimea away forever if it starts selling water to its Russian occupiersBy renewing water supplies to Crimea, Ukraine would make Russia’s illegal occupation permanentThreats of prosecution to silence protest over new toxic emissions from Crimean Titanium factoryCrimean Chemical Disaster will happen again while Ukraine helps oligarch Firtash bypass sanctionsFactory behind Crimea Chemical Disaster in Armyansk demands Russia prosecutes UkraineCrimea Chemical Disaster – Russia takes 2 weeks to evacuate children amid information vacuumRussia’s Crimea Bridge Could Collapse AnytimePutin’s Kerch Bridge to Crimea: No Money, Dodgy Insurance & No AccountabilityRussia’s Bridge to Crimea: Quick Profits for Putin’s Crony, Zero AccountabilityRussian NGO in trouble for warning tourists about risks of visiting occupied CrimeaUkraine makes first arrest of boat illegally entering Crimean portGermans ignore international embargo against Russian-occupied CrimeaUkraine can demand the arrest of ships which enter Crimean portsTransport blockade can help return Crimea to UkraineECHR could take years to reach judgement on annexation of the CrimeaSilence over Repression of Crimean Tatar Leader
• Topics / The right to liberty and security 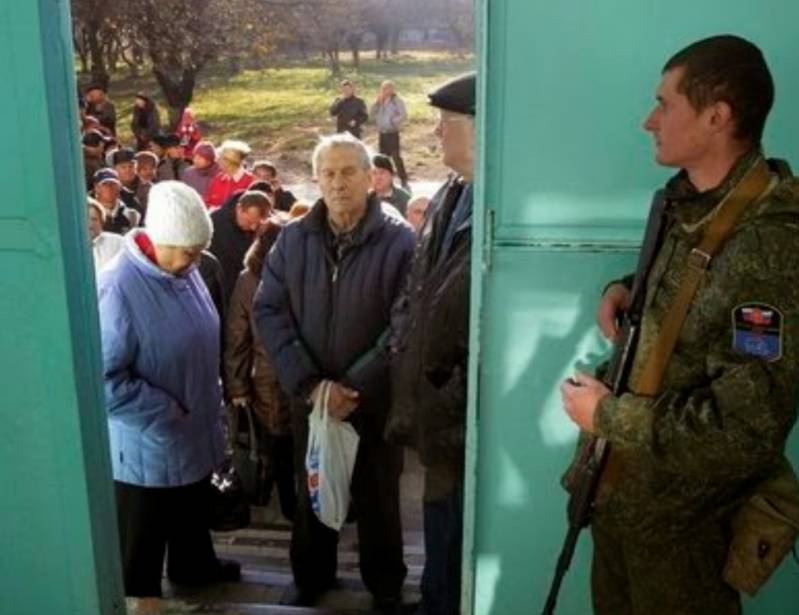 The self-proclaimed ‘Donetsk people’s republic’ has made any progress on the release of Ukrainian hostages and POWs contingent on Kyiv changing the government’s resolution on local elections from 15 July which specifically excludes areas under the control of the Russian proxy ‘republics’.  The reaction was, unfortunately, entirely predictable as Russia has been piling on threats and blackmail over recent weeks, trying to get the relevant part of the resolution changed. Any elections held on Russian-controlled and heavily armed territory, where expressing pro-Ukrainian views on Twitter can get you seized, tortured and ‘sentenced’ to 15 years’ imprisonment, are clearly inconceivable, but it is immensely frustrating that the pressure is blocking the perfectly possible release of civilian hostages, many of whom have been held in militant captivity for several years.

The demands were set out on 14 September by Natalya Nikonorova, the so-called ‘DPR foreign minister’, whom the militants consider their ‘authorized representative at the Trilateral Contact Group on Ukraine.  The three parties in these trilateral negotiations are, in fact, Ukraine, Russia and the OSCE, however both Russia and its proxy republics are constantly trying to change this, and get the ‘republics’ formally accepted as participants.

Nikonorova was reacting to a statement by Andriy Yermak, Head of the Office of Ukraine’s President, in which he promised that a new exchange of prisoners would be discussed at the next session of the Trilateral Contact Group (scheduled to take place by video link on 16 September)  Yermak even suggested that this could be an exchange of 100 hostages for 100 prisoners, whose release was demanded by the militants. Nikonorova, however, said that there was no possibility of any progress in the negotiations, including on a new exchange, without “review” of the 15 July act on local elections.  She claimed, as has Moscow, that point four of the document runs counter to the Minsk Accords.  Although her description of Yermak’s words as “pointless hot air” was brutal, this is not the first time that he and other top officials have made claims which rapidly proved to be empty.

Russia and its proxies are also making one other demand, namely that Kyiv drops all criminal proceedings against any prisoners released in the exchange.  This is extremely hypocritical, as Russia has done nothing of the sort with respect to the political prisoners and POWs which it released in September 2019.  It is also deliberately divisive, as was Russia’s insistence on the inclusion of five former Berkut officers accused of gunning down peaceful protesters during Euromaidan and of three men convicted (by a first-level court) of a terrorist act in Kharkiv, that killed four Ukrainians, including a child.

It is easy to understand why Russia objects to point four of the Ukrainian act on local elections, harder to accept their assertion that this is in breach of the Minsk Accords.  Point four states that the elections in certain regions of Donbas and Crimea will be set separately on the cessation of Russia’s occupation and armed aggression against Ukraine.  It specifies that this involves the withdrawal of all unlawful armed formations, financed and controlled by Russia, Russian occupation forces and their military technology, and the reinstatement of control over Ukraine’s border.  This is not, however, all.  The text goes on to stipulate “the disarming of all unlawful armed formations and mercenaries acting on temporarily occupied Ukrainian territory; the reinstatement of the constitutional system and law and order on occupied territory; the ensuring of security of Ukrainian citizens living on occupied territory after the full completion of the relevant procedure on disarmament; demilitarization and reintegration in accordance with the standards of the UN and OSCE”.

Russia reacted by claiming that Ukraine had effectively left the Minsk Accord, and by blocking negotiations in the Trilateral Contact Group.

Former Ukrainian President Leonid Kravchuk, who was recently appointed head of Ukraine’s delegation to the TCG informed that he had approached the Verkhovna Rada suggesting that they “consider whether this complied with Ukraine’s law on special procedure of local self-government in some parts of Donbas, as well as with the package of measures to implement the Minsk Accords. “

It was not especially clear what was meant by this, however Kravchuk later stated that he would never sign documents which jeopardized Ukraine’s sovereignty; independence and territorial integrity.  There have since been clear statements from high-ranking members of government and, on 15 September, from President Volodymyr Zelensky, that elections cannot be held on occupied territory.

Although the wording of the above-mentioned document possibly goes further than the Minsk Accords, the fundamental principle – regarding the conditions for free and fair elections – do not. According to Ukrainian law and OSCE standards, such elections mean that everybody who is entitled by place of registration / residence to vote or to stand for election can do so without fear of reprisals or imprisonment. This is categorically not the case in occupied Donbas, where the militants are holding well over 200 civilian hostages, many for expressing pro-Ukrainian views. There is no freedom of speech, no independent media and most Ukrainian Internet sites are blocked. There would be no possibility for any candidate with a pro-Ukrainian position to stand, and even if some intrepid soul were found, it is likely that voters would be too frightened that their votes were not secret to vote for the candidate.

All of this was confirmed in Freedom House’s 2020 report which gave a devastating assessment of the political and human rights situation in occupied Donbas.  The area received minus 1 out of 40 for political rights and 6 out of 60 for civil liberties.

The NGO examined three questions to determine the state of the electoral process in the self-styled ‘republics’.  The first two pertained to whether the heads of government, and elected representatives were chosen through free and fair elections, the last to whether the electoral legislation and electoral bodies allowed for real choice.  In all cases, the score was a damning 0 out of 4, with supposed ‘elections’ in November 2018 having been flawed, with no meaningful competition (more details here).