Crimean Tatar political prisoner Timur Ibragimov in court: I did not invade another country’s territory and terrorize its people 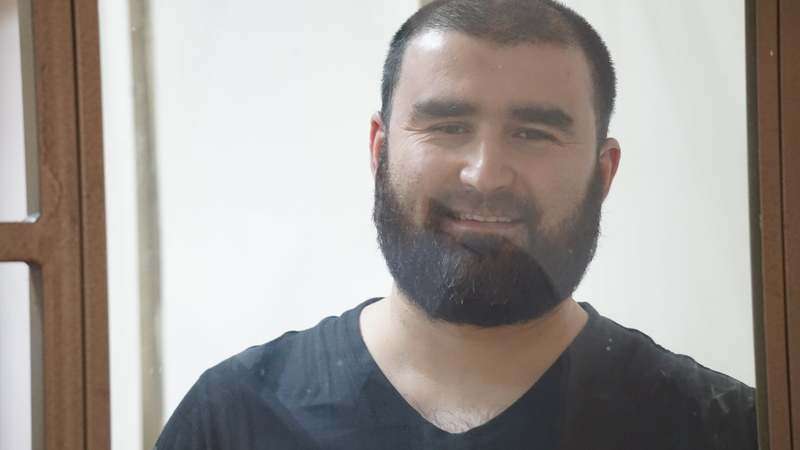 In his final address to the Russian court that sentenced him on 16 September 2020 to 17 years for no crime, Crimean Solidarity civic journalist Timur Ibragimov gave a searingly blunt assessment of Russia’s persecution of him and other dissidents in occupied Crimea.  He was accused, without any evidence, of ‘terrorism’ by a country that had invaded another country’s territory and then brought terror, repression, forced disappearances and much more to its people.

He spoke of “a viral infection” having come to Crimea in 2014, in which there were “all the elements of Russian presence, namely mass surveillance, disappearances, terrorization of the population, terror and incredible sentences for dissident thinking and for an active civic position.”

“Terrorism came to Crimea together with Russia because it is Russia that is the embodiment of terrorism. It turned out then that it is we Crimean Tatars who are bearing the brunt of the repression that our ancestors also faced and that nothing has changed. It’s just that before they accused us of being ‘traitors’, now of ‘terrorism’.

I am no terrorism or invader, I did not force my way into a foreign land and did not stage a pseudo-referendum. I did not abduct people, did not burst into people’s homes and terrify their children. All of that revolts me. I have myself become a victim of repression merely because I practised my religion. I am facing a sentence of up to 21 years for a conversation in a mosque. I am not a nationalist, and have a totally unbiased attitude to other peoples. I believe that a person should be judged by their mind, not by the colour of the skin or their origin. I have no hatred to other religions and this is categorically prohibited by Islam.

Timur Ibragimov (b. 26 January 1985) described himself in court as a political prisoner, a Ukrainian citizen; a civic journalist and Crimean Solidarity activist.  He is a Muslim, a Crimean Tatar and married with four children: Aisha, Ali, Amir and Yasmin.

Although he later opened his own computer and telephone business, he is a university graduate who majored in foreign languages.

He had earlier studied at a special school for particularly gifted children, and one of his teachers there, Ayshe Seitablayeva recalls that Timur “was not one of the sleeping heroes who sit on a couch and tell themselves that “when my turn comes, I’ll go and help. He went forward, headlong.  He was arrested because he didn’t stand on the side line. If somebody was arrested somewhere, he ran there – to help, inform and to support.  They don’t want people to support each other”.

The armed searches and arrests of Ibragimov and seven other Crimean Tatars in October 2017 and May 2018 were very clearly an attack on Crimean Solidarity.  This important civic organization arose in April 2016 in response to the mounting persecution of Crimean Tatars and other Ukrainians in occupied Crimea.  The initiative not only helped political prisoners and their families, but also ensured that information was streamed onto the Internet and in other ways circulated about armed searches, arrests, disappearances and other forms of repression.  With freedom under Russian occupation having become, as Ibragimov put it, a mere “label”, the work that he and other Crimean Solidarity activists and journalists do was absolutely invaluable.

Ibragimov and the others were effectively accused only of unproven ‘involvement’ in Hizb ut-Tahrir, a peaceful Muslim organization which is legal in Ukraine.  In declaring all Ukrainian Muslims arrested on such charges to be political prisoners, the renowned Memorial Human Rights Centre has repeatedly pointed out that Russia is in breach of international law by applying its own legislation on occupied territory.  It has, however, also noted that Russia is the only country in the world to have called Hizb ut-Tahrir ‘terrorist’ and the Russian Supreme Court did so in 2003 at a hearing which was deliberately kept secret until it was too late to lodge an appeal.  Russia has never explained how an organization that is not known to have committed any acts of terrorism or violence anywhere in the world can be ‘terrorist’. Instead, it is simply using this label to enable huge sentences against men who have committed no crime.

Initially, only Asanov was charged with the more serious ‘organizer’ role under Article 205.5 § 1 of Russia’s criminal code.  In February 2019, however, the same charge was also brought against Ibragimov and Belyalov.  Given the greater sentences that this entails, the FSB’s reasons for designating a person ‘organizer’ seem frighteningly arbitrary and could very easily have been reprisals for blunt words about the fabricated charges. The other men were charged with ‘involvement in such an alleged ‘group’ (Article 205.5 § 2).  All eight men were also charged (under Article 278) with ‘planning to violently seize power’.  This additional charge is believed by Memorial HRC to be generally used against people who refuse to ‘cooperate’ with the investigators (which all Crimeans in these cases have refused to do.

No crime, no evidence and sentences handed down by a court of the occupying state which is prohibited by the Geneva Convention from applying its legislation on occupied territory.  The only bright moment was the acquittal of one of the men – Ernes Ametov.  Such acquittals are almost unheard of in Russian courts, and there are no grounds for assuming that the decision was taken because of Ametov’s obvious innocence, since all of the men are obviously innocent.  It is possible that Russia was seeking to dilute condemnation of a trial so very brazenly aimed at silencing civic activists and journalists.

PLEASE WRITE TO TIMUR IBRAGIMOV AND THE OTHER MEN!