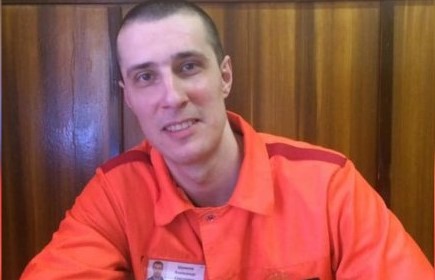 Ukrainian political prisoner Oleksandr Shumkov is due to be released from a Russian prison on 24 December 2020, however the prison administration has asked for him to be placed under ‘administrative surveillance’ for a further eight years.  The illegality of this is not necessarily surprising given the surreal charges laid against Shumkov after he was abducted from Ukraine.  What is, however, entirely unclear is how such ‘surveillance’ could be carried out in Ukraine.

Ludmila Shumkova, Oleksandr’s aunt, has posted a copy of the application to the Torzhok Interregional Court submitted by the management of Prison Colony No. 4.  This asks that a term of eight years’ ‘administrative surveillance’ be imposed upon Shumkov according to the address he is registered at, which is, of course, a Ukrainian address.

The bizarre document asks for such administrative surveillance, with Shumkov prohibited during those eight years from visiting certain places, in particularly where alcoholic drinks are sold; from attending or taking part in mass events; and from being in schools and children’s places of recreation. He would also be subject to a night curfew; be obliged to appear at the police station twice a month and would not be allowed to leave the area designated by the court.

Nothing is said about how any of this could take place on Ukrainian territory and the motive for issuing such a document remains a mystery. Ludmila Shumkova writes that “either this is the latest deranged nonsense of the aggressor state, which is trying to instruct Ukraine’s National Police to establish restrictions on a Ukrainian citizen, or there is something we don’t yet know.”