How post-election protests are creating a new Belarus 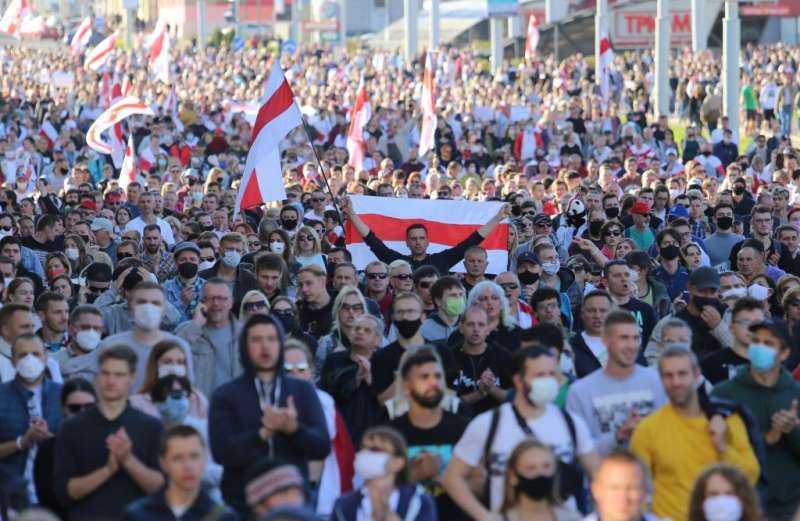 Thousands of Belarusians join protests in central Minsk on September 20 calling for free elections and an end to the Lukashenka dictatorship. (Tut.By via REUTERS)

Published by the Atlantic Council

Tens of thousands attended rallies in Minsk and other cities across Belarus on September 20 as calls for an end to the rule of dictator Alyaksandr Lukashenka continued. When these protests first erupted seven weeks earlier following a flawed presidential election, few expected them to last. After all, outcries over rigged votes were nothing new in Lukashenka’s Belarus, but they had never previously amounted to much. Indeed, throughout the previous 26 years of dictatorial rule, sustained public protests had been virtually unheard of.

Why is the current movement proving so durable, and what does it mean for the future of the country?

Long-term economic stagnation and the emergence of a post-Soviet generation both contributed significantly to the mood of public frustration that underpins today’s protests in Belarus. However, it is also possible to identify a number of more immediate factors that emerged in the months preceding the country’s August 9 presidential election.

Around the turn of the year, Lukashenka responded to renewed Russian calls for greater integration by taking the usual step of allowing large public rallies in support of Belarusian independence. This provided a population starved of political engagement with a rare taste of grassroots activism.

Lukashenka’s bungled response to the coronavirus pandemic then served to undermine his reputation as a reliable manager while enabling civil society to mobilize further as ordinary Belarusians stepped up to fill the gaps created by the incompetence of the authorities.

By the time potential presidential candidates began collecting signatures in late spring 2020, anti-regime sentiments were already in becoming more evident throughout Belarusian society. Lukashenka responded by imprisoning a number of potential rivals and forcing others to flee. However, the regime made a fateful mistake by allowing the wife of one imprisoned candidate, Sviatlana Tsikhanouskaya, to register in place of her husband.

The decision to let Tsikhanouskaya run appears to have been rooted in the chauvinistic assumption that no woman could seriously expect to challenge an old-school authoritarian ruler like Lukashenka. This was a spectacular miscalculation.

Tsikhanouskaya’s campaign proved a viral hit that electrified Belarusian society. It set the stage for the national uprising that began on election night once it became clear the authorities intended to engage in massive falsification.

The Lukashenka regime’s next big mistake was to launch a blitzkrieg of police brutality in response to the protests. Thousands were detained during the first few days, with accounts of human rights abuses and torture in custody soon becoming alarmingly commonplace.

This heavy-handed approach was adopted in an apparent attempt to overawe the public and nip the entire protest movement in the bud. However, it had exactly the opposite effect, galvanizing protesters and provoking an outcry from many formerly apolitical Belarusians.

The initial few days of the protests in mid-August were to prove a turning point for Belarus. Lukashenka’s savage crackdown transformed a fledgling protest movement into a full-blown national awakening.

Again and again, protesters have been quoted explaining that the regime has passed the point of no return and lost all legitimacy. After 26 years of dictatorship, it is time for Belarus to start a new chapter, they say. Such sentiments were present in Belarusian society prior to August 9, but they have gone mainstream following the falsification of the election and subsequent violence again protesters.

The current protest movement enjoys a number of strategic advantages that help to explain its surprising strength and resilience. A lack of leaders has made the uprising difficult for the authorities to suppress. While Sviatlana Tsikhanouskaya served an important role as the presidential candidate for the country’s united opposition, the current protests do not depend on her direction. Indeed, she has been in enforced exile since the first days of the crisis, but this absence has had negligible impact on the protests themselves.

Likewise, the arrest or exile of other nominal opposition leaders has failed to prevent the protests from maintaining their remarkable momentum. Instead, coordination continues at a horizontal level via digital channels such as the Telegram messaging app and other online platforms. Coordinators often emerge spontaneously at the local level, with hundreds of different protests taking place all over Belarus. In Minsk alone, there are more than a dozen locations that feature daily protest activity, with popup protests also a regular feature. Creativity is key, with plenty of good humor on display despite the very real threat of violence that hangs over the protests.

Despite ongoing mass arrests together with various other forms of harassment and intimidation, individual protesters continue to demonstrate a remarkable degree of commitment. Many have taken to attending weekly protests with basic toiletries in case of arrest. Others express a readiness to accept economic hardships if necessary. Most of all, there is a widespread appreciation that the current confrontation will not end soon and will require further sacrifices.

Messaging has been kept as simple as possible, with the demands of the protesters carefully crafted to avoid any potentially divisive political positions. There are no political parties or ideologies involved. Geopolitical themes are shunned, with opposition representatives repeatedly going out of their way to reject any attempts to portray the movement in pro-European or anti-Russian terms. Nor are the protests dominated by any one particular class or age group. Instead, a broad cross-section of Belarusian society has clearly and consistently articulated the same three goals: new elections, an end to state violence, and the release of all detainees.

One of the core principles underpinning the entire uprising is a commitment to peaceful protest. This non-violent approach has helped to consolidate domestic support among more traditional and conservative sections of Belarusian society that might otherwise have been alienated by the prospect of physical confrontations with the authorities. It has also helped to win considerable sympathy internationally.

However, this sympathy has yet to translate into comprehensive international backing in the form of aid to the protesters or sanctions against the Lukashenka regime. There is a danger that if the movement remains isolated and protesters are left at the mercy of a security apparatus operating with apparent impunity, the situation could eventually descend into a spiral of deadly violence.

As we look ahead to an eighth weekend of mass rallies, there is a sense that both sides are settling in for a much longer standoff. What began as a protest over a rigged election has now clearly evolved into a national undertaking of historic significance. Nevertheless, there is no sign yet of a decisive breakthrough.

“This summer, a new Belarus was born,” Sviatlana Tsikhanouskaya told the European Parliament’s International Affairs Committee on September 21. She may well be right, but this cannot disguise the fact that the old Belarus has yet to concede defeat. On the contrary, Lukashenka continues to enjoy the loyalty of his inner circle and can call upon the extensive security apparatus of his largely intact police state.

More importantly, he has received firm backing from fellow dictator Vladimir Putin. So far, the Kremlin has provided Lukashenka with propaganda teams, diplomatic cover, and a range of financial lifelines.

Crucially, Putin has also confirmed his readiness to send Russian forces into Belarus if necessary. The Russian ruler simply cannot allow an authoritarian neighbor to be ousted by people power for fear of sparking a similar outbreak in his own domains. This Kremlin intervention makes it difficult to envisage any kind of compromise solution to the current crisis.

Much will now depend on the psychological confrontation between the regime and the protest movement. Violence has failed to quell the uprising, but the authorities still believe they can undermine and outlast the protests. New factors such as the likelihood of deteriorating weather conditions will soon come into play as September gives way to October. After weeks of exhausting and relentless tension, fatigue will also inevitably begin to set in. This will further test the resolve of the protesters.

Based on the experience of the past seven weeks, there is every reason to believe the Belarusian protest movement will be more than capable of rising to the challenges ahead. Street protests that began on August 9 have taken root nationwide in ways that would have seemed utterly fanciful just two months ago. This is rapidly transforming the way Belarusians see themselves and their country. It may still be somewhat premature to talk about the birth of a new Belarus, but it is equally clear that there can be no return to the dictatorship which existed prior to August 2020.

After almost three decades in the post-Soviet doldrums, a process of historic change is finally underway in Belarus. Lukashenka and Putin can do much to disrupt and delay this process, but they can no longer realistically hope to derail it entirely. Instead, the final word will go to the Belarusian people, who have amazed the world and surprised themselves with their resilience and hunger for democratic change over the past seven remarkable weeks.

Franak Viačorka, a native of Minsk, Belarus, is a journalist and non-resident fellow at the Atlantic Council. He tweets @franakviacorka.