Russia removes memorial to Katyn Massacre in new attack on historical truthRussian activist jailed for comparing Putin with Hitler (Both invaded Ukraine)Blogger fined for saying the USSR invaded Poland in 1939 takes Russia to Court in StrasbourgRussia’s Supreme Court rules that the USSR did not invade Poland in 1939Russian fined for reposting that the USSR & Nazi Germany invaded PolandRussia says Poland, not USSR, was Hitler’s Ally and Responsible for HolocaustKremlin-funded Sputnik Int. claims West criticizes Stalin to weaken Russia & its leadershipKremlin’s proxies purge memory of victims of Holodomor and political repressionRussia’s ’new approach’ to Stalin and extended secrecy about his victimsStalin Museum: Putin’s Russia Immortalizes Bloody DictatorAnger and Protest over Stalin Monument in YaltaPortrait of Stalin appears in Russian-occupied CrimeaStalingrad as latest step in re-glorification of tyrantNeo-Nazis in Moscow’s ServicePro-Russian separatists start their own anti-Semitic TV channelPro-Russian, anti-Roma, anti-Semitic and hunting out Ukrainian speakersThe Donetsk anti-Semitic leaflets – what should not be overlookedEast Ukraine crisis and the ’fascist’ matrixRussia continues its false narrative as defender of oppressed minorities in UkraineRussian propaganda claims Jewish organizations supporting Maidan are bringing on "second Holocaust"
• Topics / News from the CIS countries 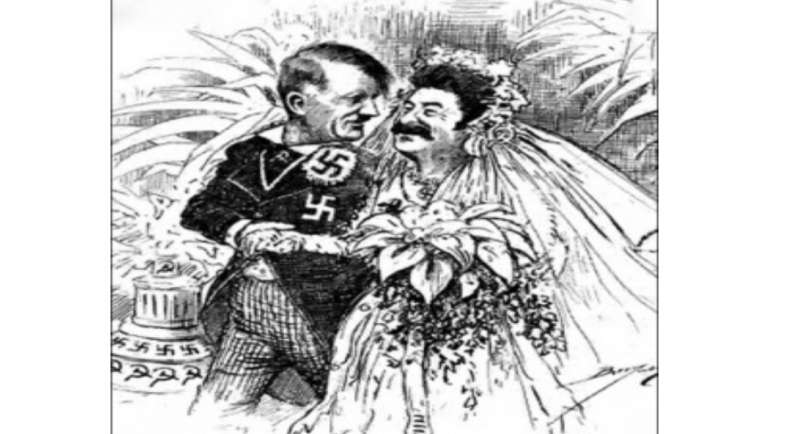 Russia’s Cabinet of Ministers has approved a bill increasing criminal liability both for denying the criminal nature of Nazism, and for something termed “spreading false information about the actions of the USSR during the Second World War”.  Since one Russian has already faced prosecution for reposting a text rightly stating that the Soviet Union invaded Poland in 1939, this new law seems set to stifle discussion about the Second World War.

TASS reported on 7 October that the government’s commission on legislative activities has approved a draft bill proposed by Deputy State Duma Speaker, Iryna Yarovaya.  The latter has already played a major role in Russia’s adoption of repressive and deeply flawed legislation of so-called ‘terrorism’ and ‘extremism’, and has now turned to policing history.

The bill is purportedly aimed at increasing measures of criminal liability for the denial of facts established by the Nuremberg Tribunal, “as well as for the public circulation of knowingly false information about the activities of the USSR during the Second World War”.  It is envisaged that the Russian criminal code will be supplemented to include the above ‘offences’ where carried out on the Internet.

While there are any number of examples of how Russia and President Vladimir Putin are actively pushing a false narrative about the Second World War and the role played by Soviet dictator Joseph Stalin, one recent prosecution demonstrates just how dangerous the new legislative initiative is likely to prove.

36-year-old Vladimir Luzgin, a blogger from Perm in Siberia, was convicted on 30 June 2016 and fined 200 thousand roubles for reposting an article on his social network page entitled ‘15 facts about Bandera supporters, or what the Kremlin is silent about’.  The Ukrainian theme, especially with respect to the Ukrainian nationalist leader Stepan Bandera, would have almost certainly attracted FSB [Russian security service] attention to Luzgin back in September 2015, however the criminal charges were brought over the following lines:

The first court considered this to be “knowingly false information”, claiming as justification that the statement contradicted the facts set out in the Nuremberg Tribunal sentences.

The fact that the Nuremberg Tribunal, over which the Soviet delegation almost certainly had considerable sway, did not mention the Soviet invasion of what was then Poland on 17 September 1939, does not mean that there was no such invasion.  Not only was there undeniably an invasion, but the effective carving up of Poland had been agreed with the Nazi regime in the Secret Protocols to the Molotov-Ribbentrop Pact on 23 August 1939.

All of this is documented fact, yet on 1 September 2016, the original verdict against Luzgin was upheld by Russia’s Supreme Court.  Luzgin has now applied to the European Court of Human Rights which seems almost certain to judge in his favour, against Russia.

In July 2017, anti-corruption activist Viktoria Lobova was jailed for three days for reposting a picture where Putin was in a Nazi uniform, and was likened to Adolf Hitler.  The reasons:  "Both began with the Olympics”, "They both invaded Ukraine” and “They both shamed their countries before the entire world”.  The repost was claimed to have fallen under both the ‘Law on immortalizing the Victory of the Soviet people in the Great Patriotic War 1941-1945’ and ‘On countering extremist activities’, which prohibit ‘propaganda or demonstration of Nazi symbols’.

It is very likely that Luzgin will be awarded far more compensation than the fine he received.  That, and any more severe sentences handed down by Russian courts under the present regime for circulating inconvenient truths about the Second World War, must inevitably find justice, if only at the Court in Strasbourg.

All of that, however, is in the future, after a person’s life has been turned upside down by criminal proceedings.  The awareness of what writing the truth could bring in terms of prosecution; hefty fines or worse, etc. will almost certainly act as a chilling deterrent, with this doubtless the aim of the legislation.