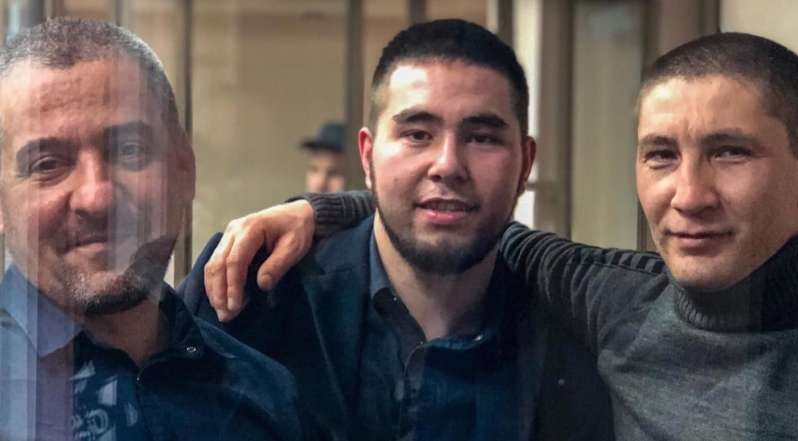 A Russian prosecutor on 19 October demanded an 18-year sentence against Crimean Tatar civic activist Rustem Emiruseinov; 16 years against Eskender Abdulganiev, who was just 21 when arrested, and 15 years against Arsen Abkhairov.  This is the latest of many such prosecutions without any recognizable crime which the Russian FSB have brought to occupied Crimea.  Even in Russia, FSB officers are known to get all kinds of perks and promotions for fabricating criminal charges, while in occupied Crimea such ‘trials’ are also increasingly used as part of Russia’s offensive against Crimean Tatars.

One of the record-breakers in occupied Crimea for persecution of Crimean Tatars and other Ukrainians is undoubtedly Sergei Makhnev. Brought to Crimea, after Russia’s annexation, this Russian FSB ‘investigator’ has either been, or is directly involved in the politically motivated cases against at least 60 Ukrainian citizens, all recognized by the authoritative Memorial Human Rights Centre as political prisoners.  Makhnev was one of the ‘investigators’ involved in Russia’s illegal prosecution of 24 Ukrainian seamen, seized after Russia attacked three naval boats near Crimea.  He played a role in the persecution of six Ukrainian Muslims from the Yalta region, including human rights defender Emir-Usein Kuku, and has since headed the team appointed to concoct similar prosecutions of 25 Crimean Tatar civic journalists and activists.

All of these cases and others have been condemned by the UN; OSCE and the international community, but they also bring the perpetrators plenty of goodies in the form of promotions, bonuses and other career benefits. As mentioned, some of the reasons for this are the same in both occupied Crimea and in Russia.  Makhnev and other FSB officers can claim good statistics for having ‘broken up criminal gangs’, caught great numbers of ‘terrorists’ or ‘extremists’ merely by persecuting law-abiding Muslims or Jehovah’s Witnesses and fabricating charges against them. It is quite possible that there are also separate perks for those FSB, like Makhnev, involved in imprisoning Crimean Tatars with a strong civic position.

The charges against Crimean Tatar and other Ukrainian Muslims of involvement in the peaceful pan-Islamist Hizb ut-Tahrir must be a real favourite with the FSB, since an organization which is legal in Ukraine and which has never committed acts of terrorism can be called terrorist merely because of a secretive and politically-motivated Russian Supreme Court ruling in 2003. Armed with that 2003 ruling, no real proof of involvement in Hizb ut-Tahrir is even required since the FSB has its own loyal ‘experts’ who will say that just about any word indicates ‘involvement’ and also uses secret witnesses whose testimony is totally unverifiable. Makhnev and his FSB mates are increasingly also planting ‘prohibited literature’ which is then presented as evidence.

All of the above methods have been seen in the trial now ending of Rustem Emiruseinov; Arsen Abkhairov and Eskender Abdulganiev.  At the hearing on 8 October, Makhnev and another FSB investigator, Mikhail Lopyrev were questioned about their role in the armed searches and arrests on 14 February 2019.  For investigators, both claimed a disturbing level of forgetfulness, while also asserting adherence to procedure that would be admirable were it true.

Makhnev, however, claimed to “not recall” hearing Emiruseinov ask for a lawyer to be present, when Emiruseinov’s wife, Aliye, has stated that her husband asked many times for a lawyer, with this, his right, denied him in very rude manner.  There is confirmation of this also from the lawyers who were prevented from entering the men’s homes.

The reasons why lawyers are virtually never allowed in are many, with none of them good. We know in this case that one of the reasons is likely to have been the ‘prohibited books’ supposedly found in two homes.  The men and  their families are adamant that the books were not there before the FSB officers arrived, together with the purportedly independent ‘witnesses’ whom they brought with them,

The testimony provided by ‘secret witnesses’ is equally unconvincing, yet despite the lack of any grounds for keeping their identity secret, this was demanded by prosecutor Igor Nadolinsky and allowed by the court.

All of the individuals involved in these cases are well aware that they are prosecuting men who have not committed any crime and are falsifying evidence to get men imprisoned for 15 or 20 years. It is quite likely that Emiruseinov was charged under Article 205.5 § 1 of Russia’s criminal code (‘organizing a Hizb ut-Tahrir group’) because of his activism within the Crimean Solidarity civic initiative in defence of other political prisoners. Both Abdulganiev and Abkhairov were accused of ‘involvement’ in that group  (Article 205.5 § 2)  Like all other Crimean Tatars in these case, Russia has also brought in the surreal charge (under Article 278) of ‘planning to violently seize power’.  This additional charge is believed by the Memorial Human Rights Centre to be generally used against people who refuse to ‘cooperate’ with the investigators (which all Crimeans in these cases have refused to do).

Memorial declared the three men to be political prisoners on 31 January 2020.

The men will give their final address to the ’court’ on 2 November.