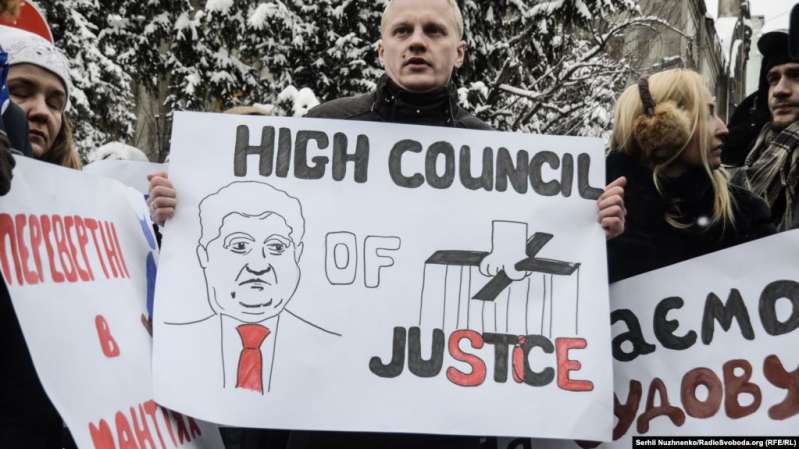 The Council of Europe’s Venice Commission gave a pretty damning assessment of major elements in President Volodymyr Zelensky’s judicial reform bill last week, although many Ukrainians might be forgiven for thinking the opposite was true. Deliberate manipulation of the facts have prompted fears that plans are underway to push through the entire bill, claiming this to have received the green light from the European experts.

In their report on the Venice Commission’s conclusions, Stepan Berko and Mykhailo Zhernakov from DEJURE, together with Halyna Chyzhek from the Anti-Corruption Action Centre, that the first bill that Zelensky proposed almost a year ago on judicial reforms did raise some hopes, and not only in Ukraine.  Back in December 2019, the Venice Commission presented an assessment that slammed encroachments on the independence of the Supreme Court, but welcomed what they saw as a first step towards cleaning up the courts.

In the past year, however, “corrupt judges have blocked reforms, and the President, judging by Draft Bill No. 3711, has decided that it is more convenient to travel with dodgy judges, than to fight them”.  As reported, there is mounting frustration over the failure by the President and the relevant authorities to adequately react to evidence of appalling corruption by the head of the District Administrative Court in Kyiv, Pavlo Vovk, a number of his colleagues, and the head of the State Judicial Administration.

On 22 June 2020, Zelensky tabled a new draft bill, No. 3711 on amendments to the Law on the Judiciary and the Status of Judges.  This was effusively received by the High Council of Justice [HCJ], which is hardly surprising since the bill not only failed to address the need for reform of that body, but actually gave it even greater powers.

The bill proposes ‘an open competition’ for members of the High Qualification Commission of Judges [HQCJ], with international experts taking part in the selection commission.

The problem here, however, is that the procedure set out would make it very easy to replace such international experts by ‘their own people’, through the involvement of the Ukrainian Human Rights Ombudsperson.  In July 2019, the current Ombudsperson, Lyudmila Denisova was implicated in the first revelations of serious judicial corruption within the District Administrative Court in Kyiv.  She is alleged to have helped fill HQCJ with members considered to be malleable and willing to provide the decisions required of them regarding judges’ qualification assessments.  It is also worrying that the competition would be  controlled by the High Council of Justice [HCJ], the body which a large number of NGOs believe to be behind the sabotage of judicial reform over recent years.

No 3711 actually proposes to give HCJ additional powers and to make HQCJ subordinate to it.

There are also proposals on resolving problems arising from the effective existence of ‘two Supreme Courts’.

Here too HCJ would receive a role in determining the procedure, etc. for ensuring that the judges who are to be reinstated undergo qualification assessment.

No reform of the High Council of Justice

Zelensky promised in his election campaign to reform this body, and that reform is, in fact, a commitment which Ukraine gave to both the International Monetary Fund and the EU.

Now instead, there is no suggestion of changing HCJ makeup or reforming it, with the body instead, according to the bill, to receive more power.

The High Qualification Commission of Judges has not been functioning since November 2019, when it was dissolved, without new members having been appointed. DEJURE has expressed scepticism at the way media linked with two influential oligarchs (Ihor Kolomoisky and Viktor Medvedchuk) are hyping up the problem of a shortage of judges as a way of pushing for Draft Bill No. 3711 to be passed.  The bill’s retention of all mechanisms for maintaining judicial corruption would put Ukraine on a crash course with the IMF which suits both oligarchs who want to work more with Russia, not the West.

The authors believe that there is deliberate misinformation about the Venice Commission’s assessment aimed at getting No. 3711 pushed through in full.

This, in fact, runs counter to the Venice Commission’s recommendations. The latter recognizes the need to get HQCJ functioning again, but therefore proposes moving away from one single law.

“23. In view of the parallelism of urgent and more structural changes set out above, the Venice Commission will analyse draft law No. 3711 as a “fast track” piece of legislation and will therefore recommend removing more structural changes at this point, leaving them to a separate draft law that should have a more holistic outlook. Some interlocutors of the Commission argued that all changes should be included in a single law. However, some of the necessary changes, notably as concerns ensuring the integrity of the members of the HCJ, are more complex and need thorough and inclusive discussion with all stakeholders. There is a real risk that the adoption of a single law at this stage would delay the urgent appointment of judges at the first and second instance courts. While they need not be covered in the same law, the issues concerning the integrity of the members the HCJ are of an urgent nature as well and should not be delayed.”  [not highlighted in the VC report]

75. The Venice Commission is faced with a dilemma: on the one hand there is a real need for a “quick fix” for the High Qualification Commission of Judges so that - hopefully - judicial vacancies can be filled as soon as possible, and, on the other hand, it has to be ensured that an HQCJ without doubts of integrity be established for that purpose. The Venice Commission can accept the idea of a “quick fix” because (a) the Competition Committee should ensure the integrity of the HQCJ before it commences its work, and (b) elements in in draft Law No. 3711 that would subject the HQCJ to the HCJ should be removed.”

The Venice Commission is thus suggesting that Draft Law No. 3711 be amended to “remain strictly limited to the re-establishment of the HQCJ and the integration of the judges of the Supreme Court of Ukraine”.

At present, it goes much further as “it also fully subordinates the HQCJ to the HCJ.

77. However, the relationship between these two judicial governance bodies is a complex topic and this issue should be addressed only in the framework of a wider reform. Therefore, these provisions should be removed and the new HQCJ should have full autonomy, like the dissolved HQCJ, especially be able to establish its own rules of procedure. The new HQCJ should build on the work of its predecessor and it should be free from interference from the HCJ. While this is not covered in draft Law No. 3711, the issue of the integrity and ethics of the HCJ should be addressed as a matter of urgency as well.”

Although the Venice Commission’s assessments can be ignored, that clearly raises the question of why the opinion was sought in the first place.  What is thoroughly unacceptable is that the assessment is misrepresented as providing broad justification for a bill that, without major amendments, will further entrench judicial corruption and move Ukraine further away from its western partners and the IMF.