Why was the list of candidates for the position of a judge of the European Court of Human Rights from Ukraine rejected?The bill on oligarchs “Prepares extrajudicial dealings”Police accused of protecting prime suspect in Vilshany Roma murder Where are you going, Ukraine?Russia brings ‘sabotage’ charges against Crimean Tatar leader in revenge for Crimea Platform Last chance for Russian court to end persecution of historian of the Terror Yury Dmitriev Free Yaroslav Mysyak: NGOs call on US President to ask Zelensky to pardon Ukrainian youth pastor Blind Crimean charged with ‘terrorism’, after Russia"s FSB plant ‘prohibited books’ he can’t readGermany’s Nord Stream 2 collaboration comes as Russia holds a record number of Ukrainian political prisoners A brief description of the KHPG strategic litigations in the first half of 2021SSU Reform: Challenges and Prospects. The StudyLegal Opinion on the political motives of the criminal prosecution and violations of human rights in criminal proceedings of Konstantin ZhevagoRussia launches attack on author of PACE report condemning human rights violations against Crimean TatarsRussia imposes prison sentences for donating to ‘undesirable NGOs" and adds Bard College to its blacklist An Open Statement Of The Human Rights NGOs On The ECHR Judge Candidates Competition in UkraineZelensky imposes sanctions against men who fought for Ukraine in Donbas Prisoners’ rights to health protection and medical care in 2014-2021: KHPG reportHow can Ukraine’s leaders hand Babyn Yar into private Russian hands? Prisoners’ rights in Ukraine 2014-2021: KHPG reportAppeal of All-Ukrainian Council of Churches and Religious Organizations on solving the problem of innocent convicts
• Topics / Human rights protection 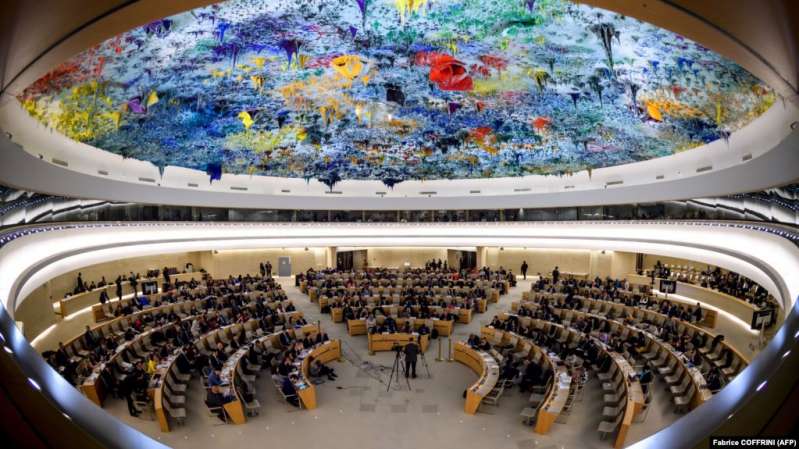 Russia and China were among 15 countries elected to the UN Human Rights Council on October 13, drawing sharp criticism from rights groups and the United States over their abysmal human rights records.

"Electing these dictatorships as UN judges on human rights is like making a gang of arsonists into the fire brigade," said Hillel Neuer, executive director of UN Watch.

Candidates were elected by secret ballot in geographical groups to ensure representation.

The Asia-Pacific group, which included Saudi Arabia, was the only competitive race, with five candidates vying for four seats. Saudi Arabia failed in its bid to gain a seat.

"Saudi Arabia’s failure to win a seat on the Human Rights Council is a welcome reminder of the need for more competition in UN elections. Had there been additional candidates, China, Cuba and Russia might have lost too," said Human Rights Watch UN director Louis Charbonneau.

China has been condemned by Western countries for its treatment of ethnic minorities in the country’s Xinjiang region and the crushing of Hong Kong’s pro-democracy movement.

Rights group also criticize Russia for its support of Syria’s government and possible war crimes, as well as repression of dissent at home.

In 2018, the United States withdrew from the UN Human Rights Council due to its alleged anti-Israel bias and election of the world’s worst human rights offenders to the body.

"Today the UN General Assembly once again elected countries with abhorrent human rights records, including China, Russia, and Cuba. Venezuela was elected in 2019," U.S. Secretary of State Mike Pompeo said in a statement. "These elections only further validate the U.S. decision to withdraw and use other venues and opportunities to protect and promote universal human rights."

The new members will begin their term on January 1, 2021.

With reporting by AP, dpa, and Reuters