Russia’s most toxic ‘Odesa Massacre’ lie and the help Ukraine is giving itInterpol cancels search for key Odesa 2 May 2014 suspect who was helped to flee justiceRussia’s most toxic lies about a fictitious ‘Odesa Massacre’ and the responsibility Ukraine bearsThe day Russia lost Odesa and launched a lethal propaganda lie used to kill in DonbasDramatic Acquittals in Trial over Odesa 2 May 2014 RiotsPutin and Russia Today continue incitement to kill through lies about non-existent Odesa ‘massacre’Ukraine faces human rights court hammering over investigation of Odesa 2 May TragedyOdesa Smoking Gun Leads Directly to Moscow"US guilty of genocide": Kremlin supports anti-Maidan festival with links to the German far rightOdesa 2 May Suspect: We were financed by MoscowVital Probe of Odesa May 2 Tragedy stymied because of questions answered?Movement at last on Odesa 2 May investigationRussia Today, or why Odesa May 2 is different from BaltimoreOdesa May 2 Investigation: A Failed Test for Ukrainian JusticeMore Evidence against Incendiary Lies about Odesa 2 MayContinuing Obstruction of Odessa May 2 InvestigationPropaganda that KillsOdessa May 2 trial turns into farce as Russia continues ‘massacre’ propagandaBad Start to Crucial Odessa May 2 TrialsRussia’s New Odessa File
• Topics / The right to life 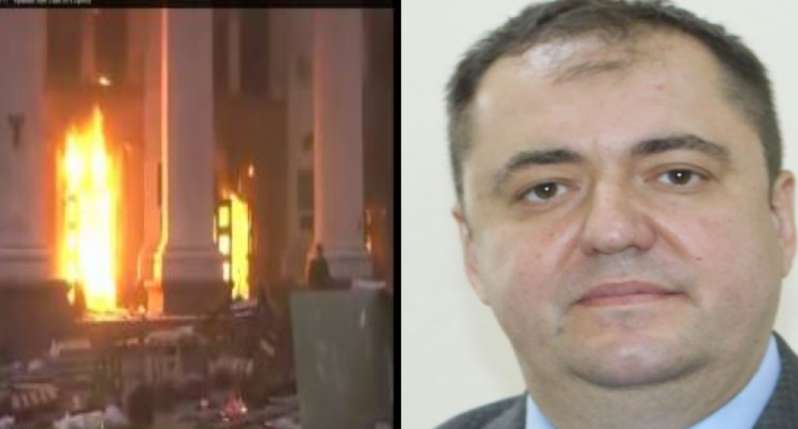 Having spent six years claiming that the tragic fire in Odesa on 2 May 2014 was a ‘massacre’, and that Kyiv is protecting the perpetrators, Russia has not only shielded a main suspect, but has given him a top position in occupied Crimea.  Volodymyr Bodelan, the former head of the Odesa Emergency Services, has just been appointed deputy head of the Simferopol district in Crimea, after fleeing arrest in early 2016 and receiving Russian citizenship.

In reporting Bodelan’s new position, the Russian newspaper Kommersant cites  assertions made by the Odesa official on 14 May 2014.  12 days after the fire in the Trade Union Building on Kulikove Pole, Bodelan claimed that he was “certain that 99.9%” of the (42) victims had died “in a matter of seconds, and not from smoke or from fire”.  He also asserted that “radicals” had beaten up people leaving the building so that others refused to leave.  Although  there were a small number of such attacks, claims that people were killed outside were false.  Neither Bodelan then, nor Russian propaganda channels ever mention the well documented and videoed attempts by pro-unity demonstrators outside the Trade Union building to save the lives of their ideological opponents as soon as the danger became apparent.

Since fleeing Ukraine, Bodelan has frequently given interviews to the Russian media with the same abundance of misleading information and attempts to minimise his role.

Since Moscow has funded a major ‘Odesa massacre’ propaganda drive, purportedly because Kyiv has denied the victims justice, it is important to stress that Bodelan’s attempts to absolve himself of blame are not borne out by the facts.  As Kommersant itself notes, Bodelan was accused by both the ‘anti-Maidan’ (and pro-Russian) activists who had barricaded themselves in the Trade Union building, and by Ukrainian investigators of having obstructed timely arrival of fire engines.

After studying all of the evidence, including the recordings of phone calls to the fire brigade, pleading for fire engines to be sent, that the Council of Europe’s International Advisory Panel reported in early November 2015 that many of the deaths in the fire could have been prevented had firefighters not taken over 40 minutes to finally appear.

Bodelan was on Kulikove Pole during the events and called the dispatch centre around a minute after the first emergency call was made instructing the controllers to only send out fire engines on his command.

Three emergency services officials were charged at the end of February 2016 under Article 135 § 3 of the Criminal Code (leaving people in danger).  Viktor Hubai, deputy head of the Emergency Services Regional Department was remanded in custody, while the head of the shift Yury Shvydenko and duty chief operator Svitlana Koyeva were placed under house arrest.  It is Koyeva’s voice that can be heard on the tape ignoring the calls for help.  It is not clear whether any of these prosecutions have resulted in convictions.

Obviously the question must still arise as to whether individuals should obey orders that place lives in jeopardy, however it is surely unequivocal that the person who issued the orders should not be forgotten if charges are being laid. Bodelan is the son of a former Odesa mayor with considerable influence in the region, which may have also contributed to the disturbing unwillingness to hold Bodelan to account.  There was effective sabotage of the prosecution, since Bodelan was not arrested at the same time as his subordinates, giving him ample opportunity to leave the country around 1 March 2016.

Back in 2015, the International Advisory Panel called the failure by the Ukrainian authorities to properly investigate how the fatal delay in sending fire engines “the most striking example of a lack of diligence”.  The Council of Europe experts particularly criticized the fact that the investigation had been left to the Interior Ministry given its close link to the emergency services.

Bodelan himself has claimed that he issued the order that caused the fatal delay in sending fire engines to avoid danger to emergency service staff following the seizure of a fire engine during the disturbances in the centre.  No official was killed in those disturbances, whereas he was present on Kulikove Pole and could see the mortal danger that people were in.

Bodelan has also asserted that a fire crew was sent but that it was obstructed by aggressive protestors and that time was lost in negotiations to agree a safe corridor.  The 2 May Group, a civic initiative which closely investigated the events, has found no evidence to confirm this, and the video footage shows a very different picture. In fact, even his former subordinates have now given testimony which totally refutes that version.

Bodelan did, however, leave Ukraine for a while in 2015 after Petro Lutsiuk, the head of the regional police on May 2, 2014, was arrested and charged with professional negligence.  He later returned, and even become an aide to an MP from Odesa. The 2 May Group reported, on Bodelan’s first return to the country that he appeared to have his reasons for believing himself to be immune from prosecution.  It was totally predictable that he would leave the country again once his ex-subordinates were arrested. An investigation into how Bodelan was able to flee the country, and who had helped him, was announced back in March 2016.  If it ever got off the ground, it appears to have fizzled, probably after public attention waned.

There is plenty of evidence in the months leading up to 2 May 2014 of Russian efforts to achieve the same upheaval, and then carnage in Odesa as in Donbas (see, for example: Odesa Smoking Gun Leads Directly to Moscow )  It has always been assumed that Russia swiftly changed direction, and began its most toxic ‘Odesa Massacre’ lies after the disturbances and the fire shook everybody, and prevented a Donbas scenario in Odesa.  That probably remains the most plausible explanation, however  Bodelan’s behaviour had always seemed unfathomable, and his new role as ‘Russian’ official in occupied Crimea does make one wonder when exactly he first began working for Russia.

See also:  Russia’s most toxic lies about a fictitious ‘Odesa Massacre’ and the responsibility Ukraine bears