Russian court passes huge sentences for involvement in non-existent “Network”Defendant in notorious Russian political trial seeks asylum in UkraineRussian prosecution witness confirms that all ‘extremism’ used to jail teenagers came from FSB infiltratorFSB infiltrator creates an ‘extremist’ group to jail teenagers critical of the Putin regime in Russia“Now and then the flame dies down, but solidarity is a stream of sparks”77-year-old Russian human rights defender jailed for Facebook repost in support of political prisonersWhy block VKontakte when it provides evidence of Russian war crimes in Ukraine?Inside The Ukrainian ’Hacktivist’ Network Cyberbattling The KremlinDarya Polyudova gets 2 years for criticising Putin and war in UkraineRussian ’federalization march’ activist jailed for critical social network postsRussian solo mother on trial for social network reposts in support of Ukraine17-year-old Crimean charged with ‘extremism’ for social network entriesBelarusian imprisoned in Russia for social network posts in support of UkraineRussian soldiers’ deaths in Ukraine: A web of lies and fake social network pagesRussian activist arrested for posts on social networksBelarus: arrests of social network moderatorsTVi accuses Broadcasting Council over removal from cable networksBroadcasting Council denies role in removal of TVi from Triolan networkTVi removed from cable networks in 11 citiesAnger over shelving of important environmental plan
• Topics / News from the CIS countries 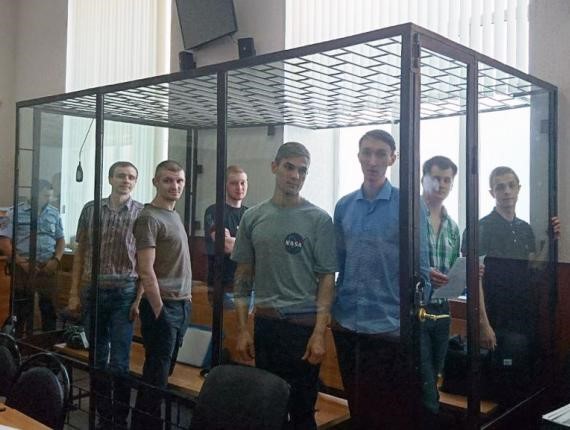 Russia’s Military Court of Appeal has upheld sentences of between 6 and 18 years against seven young left-wing activists from Penza.  Although there is nothing unusual in today’s Russia about political trials on fabricated charges, this case did stand out since the men were all charged with involvement in a supposed ‘terrorist’ organization that never existed.  The fictitious nature of the so-called ‘Network’ [«Сеть»] was just one of the eery echoes from the height of Stalin’s Terror in 1937 era in this case.  Another was the timing, with the arrests of young anti-fascist activists in Penza in October 2017 and St. Petersburg in January 2018 coming in the run-up to the highly contentious ‘presidential elections’ for Vladimir Putin’s fourth official term in office and the FIFA World Cup which Russia was hosting. The arrests of young men with left-wing and anti-government views seemed a clear warning to other young people.  A further echo, although here Putin’s FSB have long used the same techniques as Stalin’s NKVD, was the systematic use of torture to extract ‘confessions’.

Most of the defendants retracted confessions as soon as they were given lawyers, and both they and witnesses gave harrowing and detailed accounts of the torture methods used.  This and the scars from torture were consistently ignored, with no proper investigation into the allegations ever carried out.

On 10 February 2020 the Privolzhsky District Military Court in Penza sentenced 27-year-old Dmitry Pchelintsev to18 years (as demanded by the prosecutor); 23-year-old Ilya Shakursky to 16 years; 30-year-old Andrei Chernov to 14 years; 25-year-old Maxim Ivankin to 13 years; 25-year-old Mikhail Kulkov to 10 years; 31-year-old Vasily Kuksov to 9 years and 27-year-old Arman Sagynbayev to 6 years.  All but the two lshortest sentences are to be served in the harshest regime prison colonies.

Some of the men had not even known each other, though all shared anti-fascist and anarchist views.  Some of them were also involved in helping taking food to the homeless.  A lot of the supposed ‘evidence’ for the allegedly terrorist ‘Network’ came from the young men’s airsoft matches.

The only evidence that any ‘Network’ existed or of the men’s involvement in it came after from ‘confessions’ which the men retracted as given under torture, and from the testimony of a man who received a suspiciously light sentence in an earlier criminal case.

Dmitry Pchelintsev and Ilya Shakursky were claimed to have been the leaders of ‘Network’ and were convicted, under Article 205.4 § 1 of Russia’s criminal code of having created a ‘terrorist organization’.   Andrei Chernov; Maxim Ivankin; Vasily Kuksov; Mikhail Kulkov and Arman Sagynbayev were found guilty of having taken part in the supposed terrorist organization (Article 205.4 § 2).

In its analysis before declaring all the seven Penza men political prisoners, the renowned Memorial Human Rights Centre pointed out the sinister role played in this case by another young man, Yegor Zorin..who was also linked with the anarchist and anti-fascist movements.  Zorin was first detained in February 2017, seemingly when the FSB found hashish in the flat that he was visiting somebody in and is believed to have come under huge pressure from then on to collaborate with the FSB.

Memorial HRC suggested that Zorin’s second arrest had been a pretext to begin wide-reaching repression against anarchists and anti-fascists. The criminal case over the supposed creation of ‘Network’ was initiated the following day, 18 October 2017, with the above-mentioned defendants arrested over the coming days.

The role which Zorin appears to have played has had many analogies in Russian-occupied Crimea, with the methods used described in detail by at least two Crimean Tatars (Renat Paralamov and Dinar Minadirov) who withstood the torture, but were forced to flee to mainland Ukraine. The courage shown by many Crimean Tatars has recently prompted the FSB to put Ruslan Bekirov on trial for telling the truth in court and retracting false testimony against political prisoner Enver Seytosmanov that they extracted through illegal methods.

The torture methods used against the three St. Petersburg men were also documented by civic monitors. “It is thus possible to state that the ‘Network case’, both its Penza and its St. Petersburg parts, is based entirely on torture and on the resulting testimony from the accused and witnesses.“ , Memorial wrote, pointing out that such illegally obtained testimony is inadmissible.

The case was widely reported in the western media and condemned by Amnesty International and Human Rights Watch.

The appeal hearings at the Military Court of Appeal in Moscow Region began on 2 September with 11 hearings in all.  Since there is no evidence that the alleged terrorist organization ever existed, the number of hearings was presumably for appearance sake.  On 20 October, presiding judge Alexander Darnitsyn, together with Alexander Mordvin and Alexander Peresad upheld all of the sentences.  The men’s lawyers may try a cassation appeal, or immediately apply to the European Court of Human Rights.