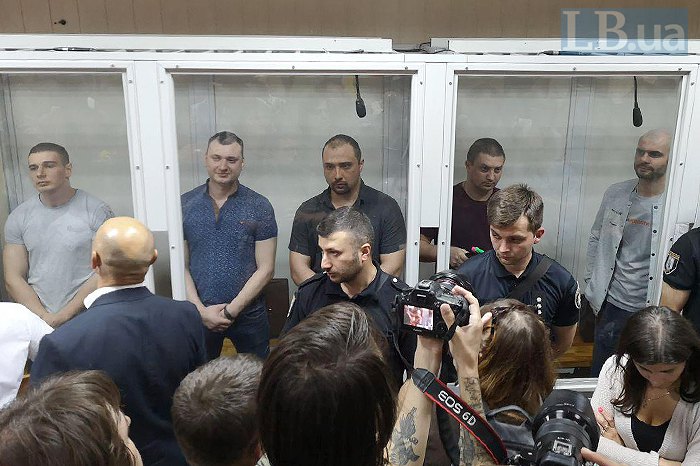 The Svyatoshynsky District Court in Kyiv has declared as fugitives three former Berkut officers accused of mass murder during the Maidan protests.  Since the men are either in Russia or in occupied Donbas, the move is not likely to lead to their capture, but will enable their trial to continue in absentia.

The prosecutors (Oleksiy Donsky; Ihor Zemskov and Yanis Simonov) told the court on 20 October that Pavlo Abroskin; Oleh Yanishevsky and Serhiy Zinchenko are in hiding in order to avoid criminal liability and asked that they be placed on the international wanted list. Lawyers Yevhenia Zakrevska and Viktoria Deineka, who represent the families of slain Maidan activists and those who were injured, supported the prosecutors’ application.  Zakrevska stressed that the three men know perfectly well  that the trial is underway and are hiding from it.  The defence cannot, therefore, claim that their clients were not properly informed, especially given that the two other men on trial -  Oleksandr Marynchenko and Serhiy Tamtur – have returned.

International search is appropriate, Zakrevska added, since there is effectively no border at present between the occupied territory of the Donetsk and Luhansk oblasts and the Russian Federation.  Ukraine’s border guards have no possibility of recording and following any crossing into Russia which either has already taken place or could at any moment.

In issuing its ruling, the court pointed out that the charges cannot be considered politically motivated as the men are accused, on the basis of considerable evidence, of violent crimes against life.  The defendants had begun hiding from the court just at the stage when they would have been able to present their version of events and refute that of the prosecution.

Abroskin; Yanishevsky and Zinchenko are to be considered on the international wanted list from when the relevant international body takes the decision to declare them wanted. The prosecutor has therefore been instructed to send the court ruling to the Ukrainian office of INTERPOL, which should in turn send it to the INTERPOL headquarters, and not block it as it often does, claiming the prosecution to be politically motivated.

Such a claim in this case seems evidently unwarranted, however there may be another problem, namely that the Ukrainian authorities themselves handed the three men over to Russian-controlled militants in Donbas in December 2019.

The men were all freed from detention or house arrest on 28 December after a cruel mockery of an appeal court hearing where the outcome proved to have been known in advance and where the Prosecutor General Ruslan Riaboshapka replaced the prosecutors from the former Special Investigations Department with three people who would support the suspects’ release in order for their participation in the 29 December exchange (which secured the release of many civilian hostages and POWs held by the militants).

Two of the five ex-Berkut men were arrested fairly soon after the bloody killings on 20 February 2014, and for most of the next five years, first Zinchenko and Abroskin, and later Tamtur, Yanishevsky and Marynchenko remained in custody.  They were – and are - charged with the killing of 48 activists on Instytutska St.  All five men have admitted that they were in that part of the street on 20 February 2014, but deny shooting people. This was a critical trial and effectively the only one over the gunning down of unarmed protesters.

Their trial had been proceeding fairly slowly, however this was largely because the Special Investigations Department had wanted to make sure that any convictions would not later be overturned on technicalities and because of the number of witnesses and people with victim status in the case.

The decision to release them at all was highly contentious, but most particularly before the court verdict, expected in 2020, had been handed down.

Marynchenko and Tamtur returned to Kyiv in February 2020, asserting that they were victims of persecution and that they were determined to prove their innocence.  It is not known where Abroskin; Yanishevsky and Zinchenko are, however it is quite likely that they have already moved to Russia and perhaps taken on Russian citizenship.

Although President Volodymyr Zelensky and Riaboshapka had both asserted that the trial would continue, this had seemed in serious doubt.  During the first hearing into the trial after the men’s release, their lawyers said that they had not heard from their clients.  One of the lawyers pointed to Article 323 of Ukraine’s Criminal Procedure Code which states that a court hearing cannot begin if the accused do not appear.

The judge announced a break in proceedings while the suspects’ whereabouts were ascertained and they were informed of proceedings.  Since three of the men’s whereabouts remain unknown, the only possibility for continuing is by switching to trial in absentia.  Ukraine’s legislation demands that for this to happen, the defendants must first be placed on the international wanted list, via Interpol, so the move on Tuesday was extremely important.