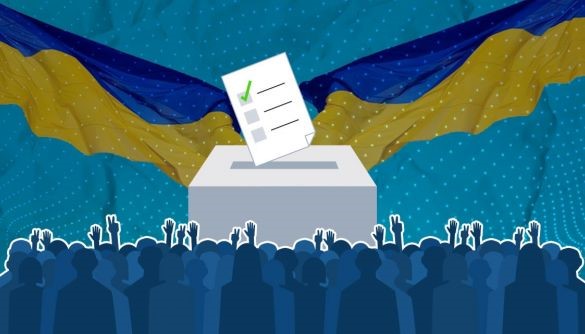 Ukrainians will be asked to do two things on 25 October: to vote in local elections and to take part in a highly dubious ‘questionnaire’ with five unrelated questions.

While there are controversial aspects to the local elections, such as the decision to not hold them in some parts of Donbas under government control, such elections are regulated by law and administered by the Central Election Commission. The ‘questionnaire’, on the other hand, is an initiative suddenly announced by President Volodymyr Zelensky, in a video address on 13 October, with the five questions made public shortly afterwards.

Serious questions arise over the legality of the entire initiative; over the point of the five, quite unrelated, questions; and over Zelensky’s role in an enterprise that seems evidently aimed at attracting voters for the Servant of the People party. The latter is looking likely to lose a lot of the support they gained on the wave of Zelensky’s huge electoral win early in 2019.

It was quite unclear at the beginning what was intended, and election watchdogs were among the many who voiced objections.  The Committee of Voters of Ukraine [CVU] immediately issued a statement pointing out that it was in breach of the Electoral Code to hold a survey on Election Day.  CVU noted that similar initiatives had been proposed in the Verkhovna Rada, but had been strongly criticized by profile parliamentary experts and had not been adopted.

Many of the questions here, about who would run the questionnaire; where the money was coming from; and where it would take place, have been repeatedly asked over the last 10 days, with some of the answers contradictory.

The question of financing was of great importance given that Zelensky was proposing something of highly questionable legality, with questions that seem very arbitrary and where the answers will bring no legal consequences. All this is, essentially, is a public opinion poll, without the representative selection that professional pollsters guarantee, since the result would only be from those more active citizens who vote in local elections.

It was claimed on 16 October, by a representative of ‘Servant of the People’, that the money was to come from donors of Ukrainian origin, with a civic organization running the questionnaire.  Then, just four days later, on 20 October, Servant of the People announced that they were financing the stunt, although would sign a contract with an unnamed company carrying out sociological surveys.  Those carrying out the questionnaire would be outside the territory of the polling stations. The statement also asserted that this is “effectively an internationally accepted exit poll format.  Questioning in this format will also be carried out on 25 October at the commissioning of other political parties.”

It is not clear what is meant, nor why the term ‘exit poll’ is used since the questions respondents are being asked have nothing to do with people’s choice at the elections.

Servant of the People claimed that this is not campaigning, but then went on to say that they were doing this “because it was one of the items of the party’s pre-election program regarding the development of direct democracy and people’s power in Ukraine.  In this way, we would like to initiate a tradition, develop a mechanism according to which the authorities will be able to gauge people’s opinions on an ongoing and regular basis. And the people in their turn, will have the possibility to present their views to the authorities”.

In short, Zelensky, who is supposed to represent the entire Ukrainian people, was acting for the benefit of his party, trying to prove, via this questionnaire, that they are “listening to the people”.

There are considerable dangers to any form of referendum, which need not be discussed here, as there are clear constitutional requirements for any referendum, and these have categorically not been met.  There are no such requirements for a ‘questionnaire’, but probably only because such questionnaires are normally run by those professionals with the relevant competence and the point of any other questionnaire (aside from as a populist gimmick) remains unclear.

There does not seem to be any provision for people to answer that they do not know / do not have an opinion.  This is an important omission since it is very likely that respondents will lack the knowledge to answer some of the questions and may not even understand why they are being asked.  Without a third (don’t know) option, they may – mentally or physically – just toss a coin.

The questions as they now stand are:

1. Do you support the idea of ​​life imprisonment for corruption on a particularly large scale?

2. Do you support the creation of a free economic zone in the Donetsk and Luhansk regions?

4. Do you support the legalization of cannabis for medical purposes, i.e. to reduce pain for gravely ill patients?

5. Does Ukraine need to raise the issue of using the security guarantees set out in the Budapest Memorandum at the international level to restore its state sovereignty and territorial integrity?

It seems extremely likely that people will have no idea how to answer No. 5.  A fair number will not even know what the question is even about.  Those who do may wonder what it will achieve “to raise the issue of security guarantees” when Russia so flagrantly violated the Budapest Memorandum in 2014, and the other signatories effectively did nothing. A ‘yes’ would, more than likely, mean no more that the respondent did know what the Memorandum was, and thought it should have been worth the paper it was printed on.

The number of People’s Deputies (MPs)

It is not even clear why No. 3 is being asked, let alone whether people can have an informed position.  Some will probably answer for reduction purely as a message of protest against legislators who they see as earning a lot of money for nothing.

A free economic zone in the Donetsk and Luhansk regions

When asked for clarification, the Office of the President explained that this was about creating special economic conditions in the government-controlled part of Donbas, with this allegedly about to help return all parts of Donbas and foster reintegration.  It is unlikely that any explanation will be given on the questionnaire, or that it will be sufficient to enable people to give any kind of informed opinion. More importantly, this is absolutely not the kind of decision that should be put, without any preparation or discussion to public opinion.

This is one of the two most cynical questions.  Ukraine has problems with palliative care and there is, supposedly support among MPs for such a bill, setting out clearly defined uses of cannabis. Although MPs claim to be in favour, no bill has yet been tabled, and the question may well be aimed at enabling politicians to justify inaction on the grounds of public opposition, expressed in response to a question posed without proper information being provided.

Life sentence ‘for corruption on a particularly large scale’

This is obviously populist, with the ‘large scale’ probably guaranteeing that many respondents will reply affirmatively. Zelensky is clearly worried that he promised “imprisonments” which have not emerged.

Ukraine needs proper judicial reform and strong, unobstructed anti-corruption bodies, ensuring that every official understands that they face prosecution if caught committing acts of corruption, not a few high-profile corruption trials, whether ending in five years or life imprisonment.  Without such reforms, there will continue to be occasional prosecutions, sometimes initiated for suspect reasons, against a background of impunity. There will also remain around 100 life prisoners whose sentences arouse well-founded concern and urgently need to be reviewed.  Draft legislation to make such judicial review possible was constantly blocked under the previous parliament and has not moved forward since.  This is doubtless due to resistance, particularly from the prosecutor’s office, against judicial reviews which will uncover sentences based solely on ‘confessions’ extracted under torture.

Zelensky reacted to criticism of his questions by suggesting that people propose their own, mentioning legalization of firearms or removing the (largely unenforced) ban on dual citizenship.

All of the above-mentioned criticisms would remain, whatever questions were chosen, however there are some that Zelensky, were he to wish to truly serve the people should certainly wish to consider.

Should a law be adopted to help Russia’s Ukrainian political prisoners, held in occupied Crimea and Russia, as well as civilian hostages and POWs, held in the Russian proxy Donbas ‘republics’?  Should the government be allowed to steal the money already set aside for such purposes?

Should parliament adopt the draft bill already tabled which would give men serving life sentences for crimes they never committed a chance of judicial review?

These are real questions, President Zelensky, ones that genuinely require an answer, on which lives depend, not political dividends.