Ukrainian political prisoner draws the life Russia has taken from him 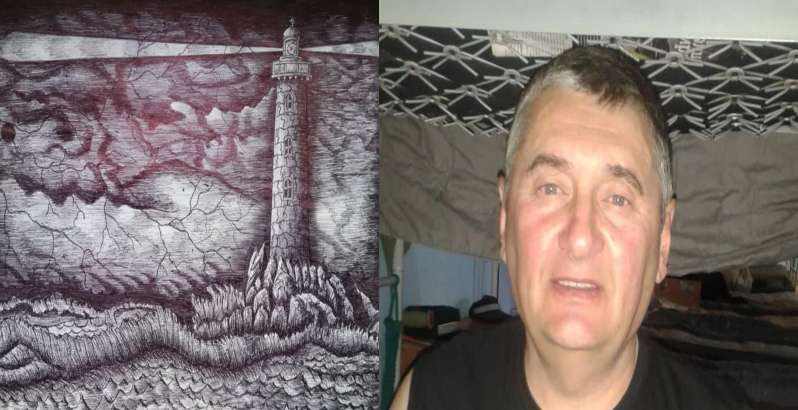 Viktor Shur has sent his daughter his latest works from the Russian prison colony where the 63-year-old Ukrainian is imprisoned on fabricated charges.  Some of the images represent his understandable negativity after almost six years in Russian captivity.  In others, Olha Nalimova says, her father “is drawing the life that he is not living”.

Earlier, in a Radio Svoboda interview, Olha spoke of childhood holidays with her father.  He would begin telling her and her brother a bedtime story that he could continue in fascinating instalments every evening.  In some ways, she says, he remained a big child himself, which is probably the reason that children were always drawn to him. 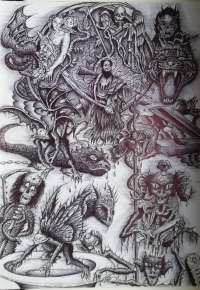 Shur is a jeweller and art collector, and the son of a well-known Chernihiv art-collector. It was purely because of his work that when, after the collapse of the Soviet Union, the question arose, Shur  opted to take Russian, rather than Ukrainian citizenship (he now has Ukrainian citizenship as well).  It was a practical decision, meaning that, since he had permanent residency in Ukraine and his entire family was Ukrainian, he could also live in Russia, travelling and transporting antiques and artwork between Ukraine and Russia.

Then came 2014, and Russia’s aggression against Ukraine.  Shur’s wife had died several years earlier, and prior to his arrest, Shur had been living in Chernihiv, helping his elderly father.  He had also supported Euromaidan, and, later, helped Chernihiv volunteers, which could possibly have made the Russian FSB target him. 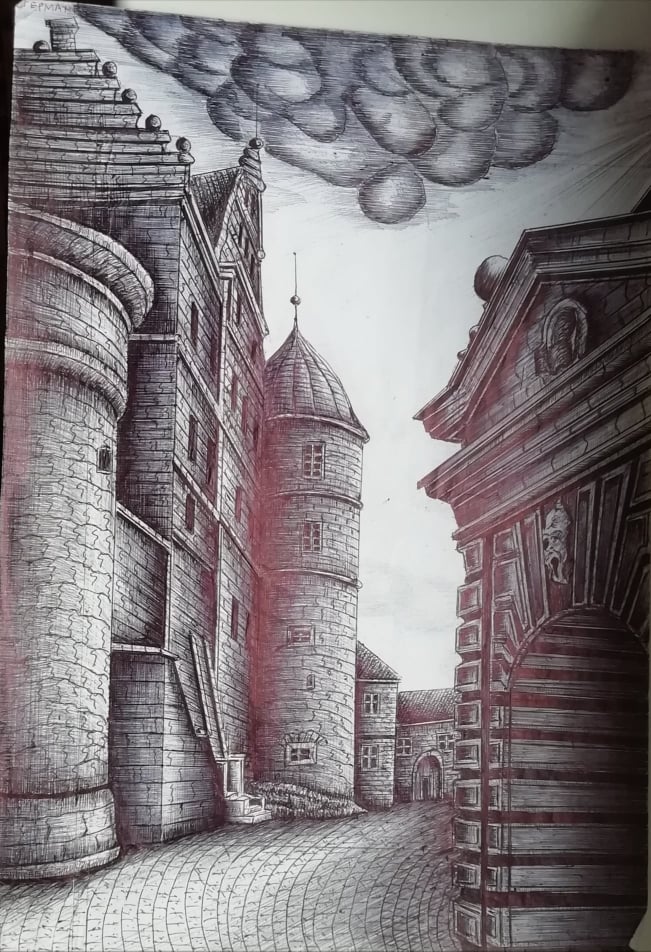 Shur is one of several Ukrainians who have been arrested since the beginning of Russia’s aggression against Ukraine and sentenced to long terms of imprisonment on mystery ‘spying’ charges.  In his case, like that of Valentin Vyhivsky, arrested a few months earlier, the charges proved specifically fluid.

On around 7 December 2014, Shur received a phone call from a client and arranged to drive to the Bryansk oblast (across the border from Ukraine). He was supposed to return immediately, but simply disappeared.  The family began searching but it was only after a week that Shur phoned and said that he had been arrested for fighting with a policeman and that he would return in another week.

The family were then told that he had been arrested for violating the rules for a state-guarded site, with that subsequently stepped up to a charge under Article 275 of Russia’s criminal code with state treason and collaboration with the security services of a foreign state.

The family much later ascertained that he had been seized in the zone between the Ukrainian and Russian borders by men in masks who smashed the car windows and used smoke bombs against him. 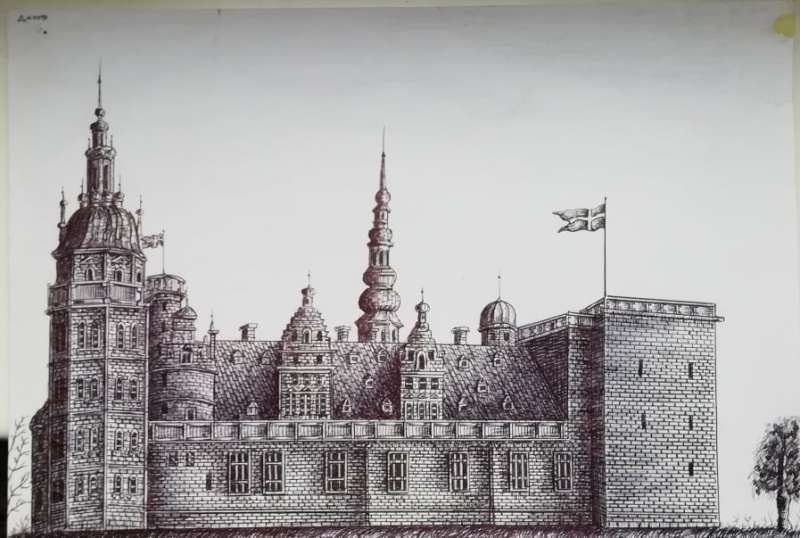 The FSB appears to have accused him of having photographed a field.  Olha Nalimova says that the FSB claimed that this was a site of strategic importance, containing flooded mines and a former military aerodrome.  There was no way for Shur to have known this, nor, presumably, the local residents, who let their cows graze on what appeared to be just a field.

Shur told his late son that the so-called investigators used psychotropic drugs to get information (or more likely ‘confessions’) out of him.  He also said that torture had been applied, but gave no details.  During all of Olha’s visits, a guard has been present and Shur would certainly be stopped and then face reprisals if he was to talk about the treatment he had received.

‘Spying’ or ‘treason’ charges are extremely convenient for the FSB, since the trials can be held in total secrecy.  Shur was initially held in the Bryansk SIZO [remand prison] and then taken to the FSB’s Lefortovo prison in Moscow. 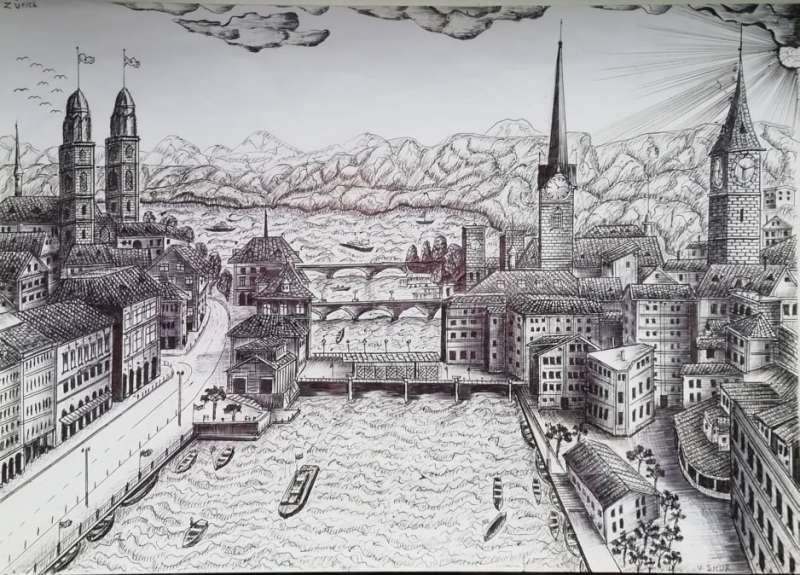 It is very likely that Shur’s agreement to admit to the charges was obtained either through torture and threats, or by assurances, via a state-appointed lawyer, that he would get a shorter sentence.

He did not.  He was sentenced on 7 October, 2015 by the Bryansk Regional Court to 12 years’ maximum security imprisonment.  The court website reported that he had been found guilty of state treason in the form of espionage.  He was supposed to have “on 9 December 2014 carried out reconnaissance activities on the territory of the Bryansk oblast – he gathered information constituting a state secret about a protected site belonging to Russia’s defence ministry with this ordered by the Ukrainian State Border Service. Were this information to be handed to Ukraine’s Security Service, the latter could have used it against Russia’s security”.

This was a closed court hearing, and Shur never had access to an independent lawyer.

Over the last six years, Shur has been prevented from attending first his son’s funeral, and then that of his father.  His health has seriously deteriorated in the appalling conditions of Russian imprisonment.  As well as bronchitis and a bone-related condition which may be causing his severe headaches, Shur also reports that his eyesight has suffered badly.  In normal circumstances, you might suggest that he stop drawing, however in the hell that he is enduring this is probably a lifeline. 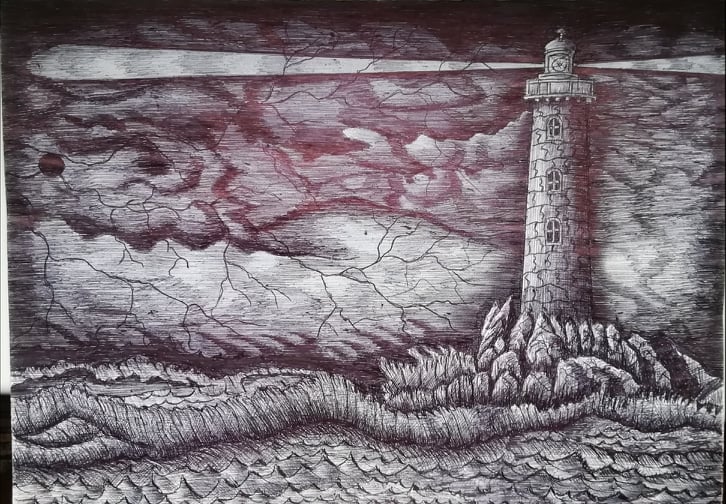