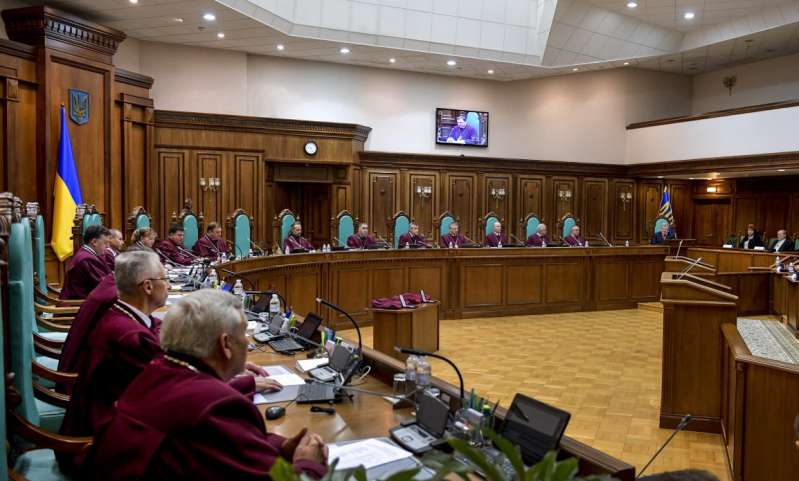 Ukraine’s Constitutional Court appears to have again struck a blow against efforts to properly fight corruption.  This time it has reportedly declared unconstitutional Article 366-1 of the Criminal Code which imposes criminal liability for providing knowingly false information in income declarations.  Although the judgment from the Grand Chamber of the Constitutional Court [CCU] has only been announced, not published,  Fedir Venislavsky, President Volodymyr Zelensky’s Representative at the CCU, has told RBC that he understands the Court revoked (by declaring unconstitutional) criminal liability for false income declarations, but not for illicit enrichment.  It also revoked the right of the National Agency on Corruption Prevention [NACP] to monitor income and expenditure of judges.  Asked whether the rulings would endanger Ukraine’s European integration in generation and the visa-free regime in particular, Venislavsky replied that he could not rule out adverse consequences if the Court’s actions continue in this direction.

Judging by a tweet on 27 October from Matti Maasikas, the EU Ambassador in Ukraine, EU representatives have made this abundantly clear, though whether they have averted the danger remains to be seen.  The Ambassador reports a “Fruitful EU Delegation and US Embassy in Kyiv meeting with the Chairman of the Constitutional Court of Ukraine. We discussed a number of issues of mutual interest, including the importance of the transparency and of maintaining the achievements since the Revolution of Dignity in 2014. “

The veiled threat could not be more obvious, however the dangers were surely clear even before the judgement was reported, albeit in this highly unsatisfactory manner.  As of late on 27 October, there have been strong responses from, among others President Zelensky’s Office and the National Agency on Corruption Prevention, without any real certainty as to which specific norms were declared unconstitutional.  Venislavsky’s report differs radically from that of former MP Serhiy Leshchenko who reported on Tuesday that CCU had voted to revoke Article 366-1 of the Criminal Code, but also illicit enrichment (presumably meaning liability for this); electronic declarations and the powers of NACP.

CCU reported earlier in October that the Grand Chamber would, on 8 October, be considering a submission from 47 MPs received in August this year. The MPs asked CCU to consider the constitutionality of a number of norms in anti-corruption legislation, including the Criminal Code; the Law on Fighting Corruption and On the National Anti-Corruption Bureau of Ukraine, or NABU.

The statement on its site on 27 October states that a judgement has been passed, which takes legal force as soon as it is adopted, but does not actually specify what it was.

One of the norms the 47 MPs clearly wanted removed, via a decision on its unconstitutionality, was that on criminal liability for illicit enrichment.

Back on 26 February 2019,  the Constitutional Court declared unconstitutional Article 368-2 of Ukraine’s Criminal Code which imposed criminal liability for “the obtaining by an individual carrying out functions of state or local self-government of significant assets, where it had not been proven that these were lawfully obtained”, i.e. illicit enrichment.  Importantly, the norm also envisaged liability where the official has handed over the ownership to another individual, with this a standard method of concealing illicit profits.  The Court claimed that the norm “does not meet the requirements of being clear, precise and unambiguous”, as set out in the Constitution (a criticism that can be levelled at countless other laws which are not declared unconstitutional). The Court also asserted that Article 368-2 does not comply with the constitutional principles of the presumption of innocence, citing Article 62 of the Constitution which states that “no one is obliged to prove his / her innocence” .  The move elicited outrage and consternation, and was finally rectified with a new law criminalizing illicit enrichment coming into force on 28 November 2019.

Although the submission from 47 MPs is generally called “the case on illicit enrichment”, the main thing that seems fairly certain is that CCU has revoked criminal liability for false declarations.

NACP responded to this with a blistering statement entitled “Corrupt practices prevail in Ukraine at the highest level” and accusing CCU judges of passing a judgement in their own interest. The Agency notes that it had found indications of false information in the declarations of two judges – Iryna Zavhorodna and Serhiy Holovaty.  This means that the two judges had a conflict of interest and should not have taken part in considering the submission.

There is effectively no point to demanding income declarations from public officials if the latter can lie with impunity.  Former President Viktor Yanukovych for at least two years running declared millions in ‘royalties’, although nobody could track down the books these were supposed to be for. Most politicians and other officials declared extremely modest earnings, yet flaunted expensive watches, drove the most expensive cars and went on hugely expensive holidays abroad.  This has included judges, some of whom were found by investigative journalists to have ‘passed judgements’ while basking in the sunshine abroad.

It has taken years to get criminal liability introduced, and it will be a disaster if this has been revoked.  Nor does it help that the judgement comes at a time when the appalling revelations of judicial corruption have not received adequate response.  Although the main judges implicated are the president of the District Administrative Court in Kyiv, Pavlo Vovk, his deputy and some others,  NABU investigators accuse Vovk of exerting influence on other courts as well.  In tapes that NABU has made public, a voice that appears to be Vovk’s can be hearing boasting that “two courts belong to us, the Constitutional Court and the District Administrative Court.”