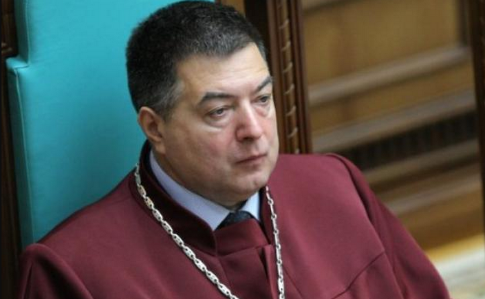 A day after Ukraine’s Constitutional Court [CCU] issued a shocking judgement that seriously  obstructs efforts to fight corruption, investigative journalists have reported a highly incriminating land purchase in 2018 which CCU President Oleksandr Tupytsky illegally concealed.  Since the 27 October judgement, passed with Tupytsky presiding over the Grand Chamber revoked criminal liability for knowingly false income declarations, this suggests that he also concealed a clear conflict of interest.

Skhemy: Corruption in Detail journalists have published the Russian land registry extract which certainly appears to confirm that Tupytsky brought land in occupied Crimea in 2018, doing this under Russian occupation and according to Russian legislation.  Tupytsky had owned land, with a villa on it, in Koreiz (the Yalta region of Crimea) before Russia’s invasion, but extended this, via a new sale and purchase agreement in July 2018,.  As Deputy President of the Constitutional Court, but without mentioning the land on his income declaration, Tupytsky bought a further 126 m² from a certain Volodymyr Risiatov, who at least now is a Russian citizen. Skhemy note that this purchase is not mentioned in either the declaration for 2018 or that for 2019.

This is not just morally reprehensible.  Roman Maselko, lawyer and member of the Public Integrity Council, explained to Skhemy that Tupytsky, as a representative of the Ukrainian judiciary, had no right to enter into any relations with the occupation regime.  Maselko specifically cites Article 9 of the Law on temporarily occupied territory, which states that any bodies, their officials, etc. on occupied territory and their activities are illegal, and that any act, decision or document issued by such bodies is null and void.  By registering Ukrainian land in illegally occupied Crimea under Russian law, Tupytsky was effectively recognizing the latter’s legitimacy.

Since judges are also supposed to set an example, and Tupytsky’s purchase is certainly unbefitting a Constitutional Court judge, there would be grounds for his dismissal, however this would require a two-thirds majority of CCU judges.

The journalists tracked down Risiatov who claimed that this was merely a formal agreement with no actual sale having taken place.  That changes nothing, since the deal was still registered under Russian occupiers’ legislation, and in fact raises another issue linked with anti-corruption legislation, since the acquisition of the property can be viewed as an unlawful gift.

Then on 27 October the Grand Chamber, with him presiding, issued a judgement revoking Article 366-1 of the Criminal Code, which imposes criminal liability for precisely such behaviour, as ‘unconstitutional’.  CCU rulings are not subject to appeal, and the criminal liability has now been revoked, with this and other parts of the 27 October ruling potentially sabotaging EU visa liberalization and IMF loans.   This, it should be said, suits Ukraine’s pro-Russian opposition parties whose MPs made the CCU submission, since they want to push Ukraine away from the EU and West.

On 27 October, the National Agency for Corruption Prevention named two judges involved in the ruling - Iryna Zavhorodna and Serhiy Holovaty – as having possibly given false information on their declarations, and therefore having a conflict of interest. The statement was issued before the ruling, and, whether or not Holovaty should have been involved iin the proceedings, he did, in fact, issue a dissenting opinion. However, if the Skhemy information is correct,, the very President of a Court whose rulings for some time have given serious grounds for concern, was, as NACP put it, “acting in his own interests”.

Given the catastrophic impact of Tuesday’s ruling, this surely warrants an urgent investigation.

The CCU ruling was published on 28 October.  As earlier reported, it revoked the criminal liability for knowingly false declarations, imposed in Article 366-1 of Ukraine’s Criminal Code and also removed essential powers from the National Agency for Corruption Prevention [NACP].  The latter has already announced that it is forced to close access to the register of e-declarations, with all of this radically reversing any progress Ukraine had made over recent years in fighting corruption. In a statement condemning the ruling, Transparency International Ukraine explained that CCU had also revoked (by declaring unconstitutional) “NACP powers to control and verify declarations, open round-the-clock access to the register of e-declarations and lifestyle monitoring unconstitutional. The rights of NACP commissioners and the task of authorized divisions (individuals) on corruption prevention and detection has been effectively abolished. Reports on significant changes in the financial status of electronic declarations subjects, and the article of the Law “On Corruption Prevention” on liability for corruption or corruption-related violations have also been declared unconstitutional.

The court deprived the NACP of multiple rights, such as access to registers, drafting reports on administrative violations, issuing conclusions on violation of the anti-corruption legislation, conducting “anti-corruption” inspections in government agencies (including those connected with whistleblower protection), filing lawsuits with the court on recognizing regulatory acts as illegal, etc.”

Transparency International notes President Volodymyr Zelensky’s promise to submit legislation reinstate the e-declaration system and inevitable punishment for deliberately violating the rules, and calls for this to be done immediately. “The new law, however, will not impact the officials whose declarations have already been targeted.”