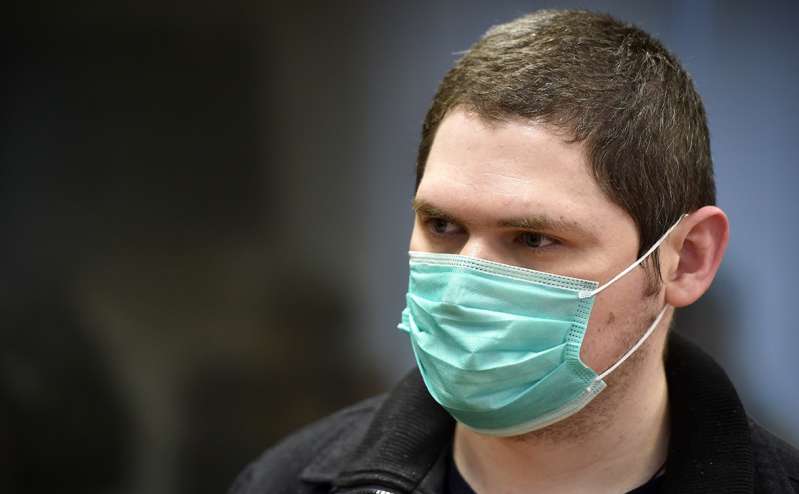 A Russian court has sentenced Pavel Rebrovsky to six years’ imprisonment with coercive ‘psychiatric treatment’, after the young man found the courage to retract false testimony given under pressure and to reveal the truth about one of the FSB’s most cynical attacks on young people with opposition views.

Most countries have systems whereby suspects can agree to testify for the prosecution in exchange for a lighter sentence.  Many countries also use infiltrators to try to catch certain types of criminals.   That, however, is where any similarity between such methods and the Russian FSB’s ‘Novoye Velichiye’ case ends.  This was a shocking offensive against young people united only by their critical attitude to  President Vladimir Putin and a wish to chat about politics and life on Telegram.  They were effectively set up by an FSB infiltrator who instigated all of the (harmless) activities enabling the FSB to claim that all 10 young men and women were ‘organizers of an extremist organization’.  This meant that all, including Anna Pavlikova, who was underage when arrested in March 2018, could be charged under  the more serious Article 282.1 § 1 of Russia’s criminal code (creating  an extremist organization and being part of its management or structural divisions), as opposed to Article 282.1 § 2 (‘involvement’ in such an ‘extremist organization’).

The ten ‘defendants’ were essentially just young people who had met chatting on Telegram.  These entirely innocuous chats were infiltrated by a person linked with the FSB – ‘Ruslan D, or Ruslan Danilov - who set about turning people who were only a group in the loosest sense of the word into ‘an organization’ with all the features that a Supreme Court decision had named as relevant when laying such ‘extremism’ charges.

‘Ruslan D’ (as he was originally known to the young Telegram users) was initially identified in the case material as Alexander Konstantinov.  It was claimed they he had simply turned up at the Investigative Committee in March 2018, having understood the possible illegal activities of ‘the group’ and decided to follow them.

In fact, every part of the creation of a group could be traced back to this individual. who first proposed creating an ‘organization’ and paid the rent on an office for it.  It was he who encouraged the others to get a printer and who came up with the idiotic name ‘Novoye Velichiye’ [‘New Majesty/Greatness’’).  It was also Danilov who came up with the idea of having an organizational structure, giving people particular areas of responsibility.  This came straight out of the Supreme Court document which had named such structural subdivisions as an identifying feature of an ‘extremist group’.  Danilov also proposed that the group have a political program, or ‘charter’, and offered to write this. An ‘expert assessment’ of this document claimed to find “elements of propaganda of the ideology of violence” in it.

Ruslan D. also tried to encourage the young ‘chatters’ to extend their activities, by starting up their own ‘channel’ on YouTube, for example, and persuaded Pavlkova,  who had been planning to leave, to remain – to be there for the armed searches, arrests and detention in March 2018.

Of the ten men and women arrested on 15 March 2018, one, Sergei Gavrilov fled to Ukraine while under house arrest, and was granted political asylum. Rustam Rustamov, who was not even accused of being part of the ‘extremist group’, agreed to admit to the charges and received a one and a half-year suspended sentence.  Rebrovsky has said that he too was promised a suspended sentence for collaborating with the investigators,  but ended up receiving two and a half years.  This is unlikely to have been the reason that the young man, who was under the total control of the Russian penitentiary service and could expect reprisals, changed his testimony on 8 July 2019.  Brought to the trial of the other seven defendants as a prosecution witness, Rebrovsky stated clearly that he had signed the document put in front of him by the investigators under pressure and threat of imprisonment on terrorism charges, and that there had never been an extremist group.  He explained how the only ‘organizer’ had been the FSB provocateur.  During the hearing at the Liublinsky District Court in Moscow, Rebrovsky stated that none of the defendants had planned any explosions, Molotov cocktail attacks or other radical actions and that “all of this was thought up by the investigator”.  He had earlier signed supposed ‘confessions’ in which it was asserted that he and the other defendants had been planning to carry out acts of sabotage, attack police stations and set fire to district administrations.

The testimony signed by Rebrovsky and Rustamov was not just important because of the lack of any real evidence, but also because revulsion over the case prompted the prosecution to try to minimize the role of the main provocateur (there were two other infiltrators, however their roles were much less important).  They got Rebrovsky to sign testimony claiming that Danilov was not an FSB employee and had not taken an active part in the supposed movement.  The document he had signed earlier asserted that the leaders of the ‘organization’ had been the two teenage girls – Anna Pavlikova and Maria Dubovik, as well as Ruslan Kostylenkov.

Rebrovsky’s sentence was revoked, together with the agreement he had reached, and his case was sent for retrial. He has now been sentenced to one of the longest terms of imprisonment (as with all the men in a medium security prison colony). The sentence was passed on 29 October 2020 by Liublinsky District Court judge Vladimir Kuznetsov, with the latter also resorting to punitive psychiatry, and ordering that Rebrovsky receive forced ‘psychiatric treatment’.

In the same Liublinsky District Court in Moscow on 6 August 2020, judge Alexander Maslov found all the ohter seven young people on trial guilty of ‘organizing the activities of an extremist organization’ (Article 282.2 § 1 of Russia’s criminal code).

Dmitry Poletayaev (18.11.1988) had also been in detention from 15 March 2018, however received a 6 year suspended sentence and was seemingly released in the courtroom.

The other three defendants were initially also in detention, however the two young women (Anna Pavlikova, who turned 18 in prison soon after her arrest) and 19-year-old Maria Dubovyk were transferred to house arrest on 16 August 2016.  Pavlikova received a 4-year suspended sentence; Dubovyk – 6 years, suspended.

The case received a lot of publicity which may be why, in the end, the sentences were the minimum possible given the charge.  That cannot change the fact that all the defendants should have been acquitted and an investigation initiated into the shocking methods used to fabricate the prosecutions.