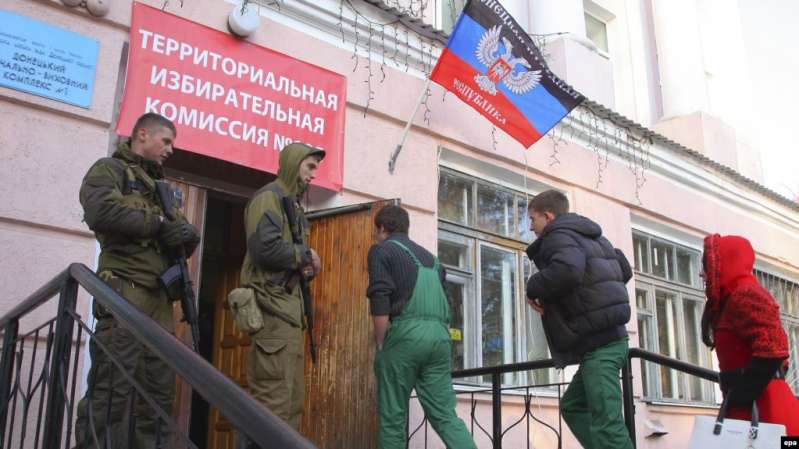 Leonid Kravchuk, Ukraine’s former President and leader of the Ukrainian delegation at the Tripartite Contact Group has presented a roadmap envisaging elections in occupied Donbas by 31 March 2021.  While any chance of such elections being free and fair are effectively nil, the anger expressed in parliament, and any accusations of ‘capitulation’ or ‘treason’ are probably premature, since the prerequisites in the roadmap are also impossible. The initial plan put forward by Russia, via its proxy ‘Donetsk and Luhansk people’s republics’ [hereafter ORDLO], is equally unrealistic, albeit for different reasons.

The list of ‘joint steps’ presented by Kravchuk on 5 November followed publication by the pro-Russian Strana.ua of an ORDLO ‘roadmap’ containing 15 points presented two weeks earlier.  These propose adding to Ukraine’s Constitution recognition of ‘special status’ for the so-called ‘republics’ until 2050 and the holding of elections without reinstatement of control of the border with Russia and very vague words about demilitarization.  Essentially everything about the document echoes Moscow’s agenda since 2014, beginning with the fact that it speaks of two parties: ‘Ukraine’ and ‘ORDLO’.  Ukraine does not recognize these illegal armed formations, and all negotiations at Minsk and via the Normandy Format are with Russia.  That alone demonstrates that the ORDLO / Moscow document is a political gesture, rather than a serious proposal.  The same, however, can probably be said of the plan for joint steps which Kravchuk presents, since it repeats demands which are certainly legitimate, but that Russia will not accept.

makes no demands on Russia at all, with the aggressor state, which finances, partially mans, arms and controls ORDLO, not mentioned;

after this, over 15 days, lists for exchange of prisoners and the exchange itself would take place.  Since the militants are only admitting to holding 89 hostages, any exchange, even if formally on the basis of ‘all for all’, as per the Minsk Agreement, would still leave around 140-150 hostages and POWs in captivity;

this would be in parallel to disengagement at four places and to President Volodymyr Zelensky tabling a bill in the Verkhovna Rada on amendments to the Constitution, creating regions with special status until 2050.  There would also be a new Law on Special Status.  This would allow Ukrainian Armed Forces to be deployed in ORDLO only at the decision of their district councils and would ban residents of other regions of taking part in rallies, etc. with more than 100 people;

full amnesty and ban on discriminating against people who took part in the events in occupied Donbas.  There is no mention of vital exceptions, such as war crimes and other grave crimes;

elections before control is regained over the border between Ukraine and Russia.

full demilitarization of ORDLO; withdrawal of foreign forces; illegal armed formations and mercenaries from Ukrainian territory at the beginning of 2021;

reinstatement of control of the state border;

by the middle of November – full and absolute access by international bodies, including the International Red Cross to all people held prisoner, and the exchange of all such prisoners, on the basis of all for all, by 15 December;

revoking by Russia of all decisions and documents interfering in ORDLO, in particular regarding the granting of Russian citizenship;

quadruple the number of members of the OSCE Special Monitoring Mission;

only after all of this would elections be organized and held (up to 31 March 2021).

While the Russian / ORDLO side demand special status until 2050, the Ukrainian roadmap proposes a free economic zone until 2050.

The next meeting of the Tripartite Contact Group is due on 10 November, with both of these documents supposedly on the table.  This, however, is extremely theoretical since there can surely be no possibility of the Ukrainian delegation agreeing to even consider a ‘roadmap’ that pretends that the aggressor state is not a party to any agreement and would effectively mean Ukraine directly making an agreement with the illegal armed formations that Russia controls.  It can also not agree to elections that cannot possibly be fair, and will not be demilitarized if Ukraine has not regained control of the border with Russia.

Russian President Vladimir Putin’s press secretary Dmitry Peskov has claimed that Ukraine’s plan, with respect to demilitarization and reinstatement of control over the border before elections can be held contradicts the Minsk Agreements.  They do not contradict the first Minsk Agreement in September 2014, however Minsk II, achieved when Russian military might was being heavily deployed near Debaltseve in February 2015, assumes demilitarization before elections, but is considerably less clear about control over the border.

Both Zelensky and, now, Kravchuk have made it clear that this order is unrealistic and unacceptable.  Although there was concern in October 2019 over Ukraine’s apparent acquiescence to the so-called Steinmeier Formula (after the then German Foreign Minister Franz-Walter Steinmeier). the agreement to a law on special status immediately following elections, did not necessarily signal a shift in Ukraine’s position.  Zelensky was adamant that for free and fair elections to be possible in occupied Donbas, “the border must be ours” and “there must not be any military”.  There can be no elections at gunpoint, he stressed. He was also emphatic that any elections must be held in accordance with Ukraine’s Constitution and legislation, and found to have been in accordance with democratic standards by the OSCE.  While the latter, and France and Germany, as the other two members of the Normandy Four, might well prefer Ukraine to be less demanding, they can hardly suggest that free and fair elections can be held in the total absence of freedom of speech and assembly and amid heavily armed militants, backed and supplied from a border that only Russia controls.

Ukrainian political analyst Vitaly Portnikov noted Peskov’s comments, saying that they show yet again that Russia has no need of either roadmaps, or peace.  Putin, he believes, has no intention of reaching any agreement with Zelensky, nor of withdrawing Russian forces from Donbas.  Putin wanted to prevent Ukraine’s closer relations with the EU and the Association Agreement.  He failed thanks to Maidan and the resistance of the Ukrainian people, and is now using territorial issues and war as pressure on Ukraine and a means of obstructing greater integration with the EU and NATO.