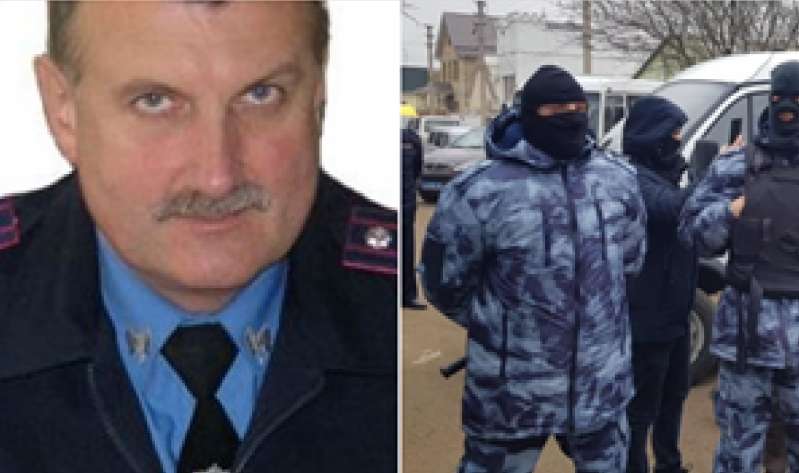 Mykola (Russian – Nikolai) Fedoryan, a former high-ranking Crimean police officer, has been arrested in Ukraine on charges of state treason after being detained as he tried to enter occupied Crimea via the Kalanchak crossing on 7 November.  Although the report on the Crimean Prosecutor’s site does not name the person arrested, it is clear from the information provided, as well as the blurred photo, that it is Fedoryan who is now awaiting a detention hearing in the Kherson oblast.

Although he left his post as deputy head of the Crimean police force in 2011, before Russia’s invasion and annexation of Crimea, Fedoryan went on to head the transport department of the state enterprise Chernomorneftegaz [Black Sea Oil and Gas] and remained in that post even when the enterprise was reregistered under Russian legislation.

It is his role in this capacity that prompted the charges of state treason under Article 111 § 1 of Ukraine’s Criminal Code.  Fedoryan, who is now 60, is accused of having systematically helped the occupation enforcement bodies during their armed searches and arrests of Crimeans on charges of involvement in Hizb ut-Tahrir.  Since 2015, Russia has been persecuting Crimean Tatars and other Ukrainian Muslims, illegally charging them with ‘terrorism’ on the basis of a flawed and almost certainly politically-motivated Supreme Court judgement in 2003 that claimed Hizb ut-Tahrir to be ‘terrorist’.  It is, in fact, a peaceful movement which is legal in Ukraine and most countries, and is not known to have been involved in acts of terrorism anywhere in the world.  Since 2017, Russia has been actively using such ‘Hizb ut-Tahrir cases’ as a weapon of repression against Crimean Tatar civic journalists and activists.

The investigators accuse Fedoryan of having provided the Crimean department of Russia’s FSB [security service] of white mini-vans used during the armed searches and arrests of men who have committed no crime, as well as in transporting them between the SIZO [remand prison] and FSB office.  They are aware of such involvement in the mass offensive against Crimean Tatar civic activists on 27 March 2019, as well as the operation in Stroganovka, Kamenka and Alushta on 10 June 2019.   All of these ‘operations’ involve large numbers of enforcement officers, most of them masked and brandishing machine guns, bursting into the homes of law-abiding citizens very early in the morning, and deeply traumatizing the men’s children, before taking the men away.  In all of these cases, Crimean Tatars, who have been recognized internationally as political prisoners, are facing sentences of up to 20 years, without any crime.  Given the early hour at which such armed raids take place, it is inconceivable that Fedoryan was not aware how the mini-vans were being used.

There is no information, at least not in the public domain, as to what Fedoryan was doing in mainland Ukraine, though well-known journalist Valentina Samar points out that there are “plenty of his former colleagues – generals and friends” whom he could have been visiting.  There may well be people in Ukraine who do not want to be associated with a turncoat facing serious treason charges, and it is to be hoped that the Prosecutor’s Office (of the Autonomous Republic of Crimea and Sevastopol), working in cooperation with the Crimean SBU (Ukraine’s Security Service), will resist any pressure, should it arise, to quietly terminate the case.

This is a very welcome move and hopefully only the first of many that will send a clear message to all those in occupied Crimea who collaborate with the Russian regime in persecuting Crimean Tatars and other Ukrainians.

The FSB armed searches and arrests on 27 March 2019 provoked international condemnation in particular because of the obvious targeting of civic journalists and activists.  There was strong protest from, among others, the US State Department, Human Rights Watch, Freedom House and Civil Rights Defenders.  The Memorial Human Rights Centre almost immediately declared the 23 men arrested on that day, and Rayim Aivazov, seized and tortured a little later, political prisoners and stated unequivocally that the FSB was using mass arrests to try to crush the Crimean Tatar human rights movement.   The arrests were both a continuation and sharp escalation in the offensive against Crimean Solidarity, the civic initiative that arose to help political prisoners and their families and to ensure that information was circulated and streamed onto the Internet about repression in occupied Crimea. The full number of political prisoners in this ‘case’ reached 25, after Eskender Suleymanov, the brother of civic journalist Ruslan Suleymanov was arrested on 10 June 2019, the second date when Fedoryan’s vehicles are known to have been used.

Other individuals who should certainly come under international sanctions, as well as being placed on Ukraine’s wanted list, include several ‘judges’ notorious for their willingness to imprison political prisoners; the prison administration and other Russian-controlled officials who are failing to provide medical care for Dzhemil Gafarov, despite his very life being in danger, and very many others.