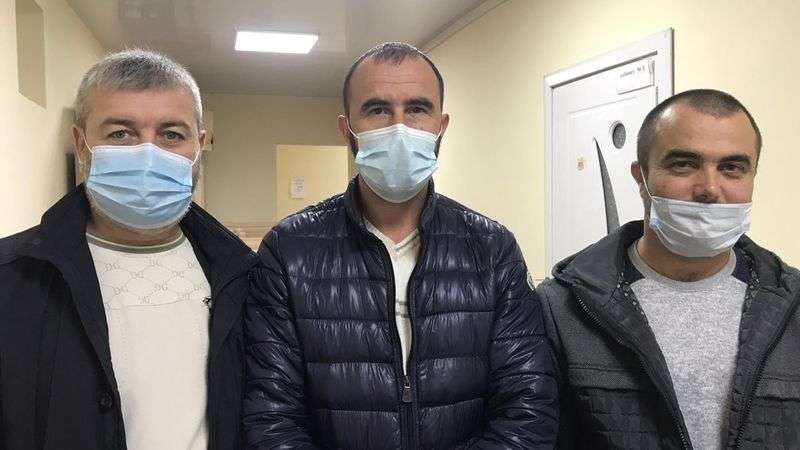 Abliakim Galiyev has become the latest Imam in occupied Crimea to be convicted of ‘illegal missionary activity’ for holding Friday prayers in his own mosque in Sudak.  Like its Soviet predecessors, the Russian occupation regime will not tolerate ‘dissidents’ of any kind, and is systematically persecuting Crimean Muslims and members of other faiths whose religious activities do not fall within those officially approved.

Galiyev was charged under Article 5.26 § 4 of Russia’s code of administrative offences which punishes for something claimed to be “illegal missionary activity”.  The prosecutor had produced a video as ‘proof’ of the charges which the defence (Seiran Kamilov, together with well-known human rights lawyer Emil Kurbedinov and a civic defender, Seytosman Karaliyev) asked to have shown in court.  Although there was absolutely nothing unlawful in Galiyev’s actions on the video, Sudak magistrate, Lyudmilla Sologub  pronounced him ‘guilty’ and fined him five thousand roubles.  The defence will be appealing.

As Karaliyev points out, his local community consider Galiyev to be the Imam of the Adzhi Bei Dzhami Mosque in the village of Dachnoye, near Sudak, and that he should, in this capacity, lead Friday prayers. Karaliyev believes that this prosecution is part of Russia’s systematic pressure on autonomous religious communities and Imams who are not under the control of the Spiritual Directorate of Muslims of Crimea, or Muftiat.

The ruling which Sologub passed states that from 2019 Galyev took part in holding name-giving ceremonies for the new-born and funeral rites, “while not being a member of the Spiritual Directorate of Muslims of Crimea or other religious organizations”.  Galiyev’s ‘offence’ supposedly lies in having “circulated information about Islam in order to draw people into becoming follows of the Islamic tradition. It was the FSB who illicitly videoed the Friday prayers in the Adzhi Bei Mosque which Galiyev led.

This prosecution is one of several against Imams, and over 100 reported by the Crimean Human Rights Group against members of religious communities for so-called ‘illegal missionary activity.

On 27 September 2019, administrative charges of ‘illegal missionary activity’ were brought against Imam Arsen Kantemirov for holding prayers without registering a “religious group”.

On 25 October 2019, officers from Russia’s so-called ‘centre for countering extremism’ turned up for ‘an inspection’ of the Salgir Baba Mosque in the village of Zarechnoye (Simferopol district).  The same ‘illegal missionary activity’ charges were brought against the Imam Asan Bekirov.

On 2 March 2020, Yelena Klepova, from the ‘magistrate’s court’ in occupied Simferopol found Imam Rasim Dervishev guilty of such ‘illegal missionary activity’.  He too was videoed leading prayers, and then detained and charged under the same Article 5.26 § 4.  He was also fined five thousand roubles.

On 1 April 2020, Alushta Imam Yusuf Ashirov was charged under this same woolly legislation, and shortly afterwards, on 15 April, Imam, Dilyaver Khalilov was summoned to give ‘an explanation’ on the same charge of unlawful missionary activities.

In March 2019, social media posted what appeared to be a request from the Mufti of Crimea,  Emirali Ablaev to a top electricity official asking for the electricity supply to the mosque in Dachnoye to be cut, on the grounds that it was not being used by the Spiritual Directorate.  As reported earlier, the Ablaev and his Muftiat have chosen to collaborate with Moscow, and there is evidence that he and the Spiritual Directorate have helped Russia’s FSB to persecute Crimean Muslims whose form of Islam (or lack of subordination to the Muftiat) he objects to.

The Crimean Human Rights Group is aware of 101 such prosecutions and reports that Russian-controlled Crimean courts have so-far imposed fines of 1,340,500 roubles.

All such administrative prosecutions are illegal and unwarranted, but are by no means the worst religious persecution that Russia has brought to Crimea.  Three members of the independent ‘Alushta’ religious community are imprisoned on preposterous and internationally condemned ‘terrorism’ charges.  Muslim Aliev, a recognized political prisoner and Amnesty International prisoner of conscience, has already been sentenced to 19 years’ imprisonment without any crime, and the leader of the community, Lenur Khalilov and member Ruslan Mesutov are facing similar charges.

The conflict between the Muftitat and the Alushta religious community appears to be both because the Alushta community is viewed as too independent, and because the Muftiat wants control of the Yukhany-Dzhami Mosque, which has legally been in the hands of the community since 1994.  In 2017, the occupation regime revoked the community’s ownership with Russian-controlled or Russian courts, right up to the Supreme Court upholding this illegal ruling.

There has been pressure on all faiths except the Russian Orthodox Church (and to a lesser degree Muslims subordinate to the Muftitat) under Russian occupation.  Russia has been systematically seeking to drive the Ukrainian Orthodox Church out of Crimea, and essentially force its congregation into exile or underground.

There has also been an appalling escalation in persecution of Jehovah’s Witnesses, with two Ukrainians already serving six-year sentences for their faith, four other men in detention and at least two others at risk of long sentences (details here).