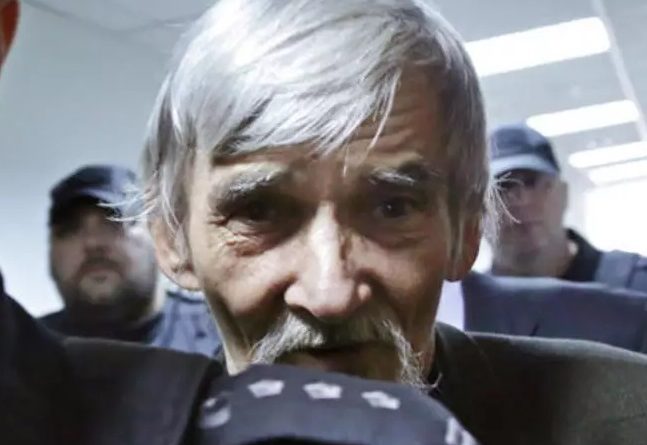 A third trial is due to begin on 24 November of Yury Dmitriev, world-renowned historian of the Soviet Terror and Russian political prisoner.  He faces charges over which he has twice been acquitted, however there are reasons for fearing that this time a guilty verdict is planned.  Those reasons, like the four-year-long persecution of the historian, have nothing to do with the course of justice.

The trial will be held at the same Petrozavodsk City Court as the previous two attempts, however under a new judge, Yekaterina Khomyakova.  The main cause of concern is that this new trial follows the shock ruling by the Karelia High Court on 29 September 2020.  This overturned all of the previous acquittals, and added an extra 10 years to the one sentence on equally flawed charges.  The resulting 13-year sentence against 64-year-old Dmitriev received international condemnation, with the horrific sentence, like the entire prosecution, widely viewed as linked with Dmitriev’s work in researching the crimes of the Soviet Terror and, particularly, in uncovering the graves and the identity of the Russian, Ukrainian and other victims of the Terror in the mass graves at Sandarmokh in Karelia.  Dmitriev has been imprisoned for most of the last four years, with the greater part of that period being in connection with the initial charges which resulted in acquittals.  Since the sudden increase in sentence to 13 years on a very dubious charge, that arose 18 months after his original arrest, was so widely seen as an act of reprisal against the historian, it seems likely that the plan now is to try to resurrect the first charges and convict him on those as well.  According to Dmitriev’s lawyer, Viktor Anufriev, the maximum sentence would be 20 years.

Dmitriev was arrested on 13 December 2016 and spent the next 13 months in custody, charged with ‘preparing pornography involving a minor’ (Article 242.2 of Russia’s criminal code) and ‘depraved actions with respect to a child under the age of 11’ (Article 135).

There were numerous echoes from Soviet times in this case from the outset with the charges purportedly based on an anonymous denunciation and the use of criminal, rather than obviously politically-motivated charges.  Within three weeks of his arrest, a major media effort was underway, aimed at sullying both Dmitriev’s reputation and that of the Memorial Society (which Dmitriev heads the Karelia branch of).

The charges were clearly intended to discredit, but pertained solely to a folder filed on his computer, and never ‘circulated’, which contained 114 photos of his adopted daughter, Natasha.  Although there is a difference in Russia between full adoption, and this situation where Natasha was a “приёмная дочь” [‘foster daughter’], the distinction was essentially about legal status and the role played by the social services, since she was certainly intended to permanently join Dmitriev’s family, including his two adult children and his grandchildren.

Natasha had been very thin and in poor health at three and a half, when Dmitriev and his former wife took her from the children’s home where she had been left by her grandmother.  The authorities had themselves advised him to monitor her development, which is exactly what Dmitriev did in the photos safely stored away on his computer, recording the little girl’s height and weight.  She was photographed naked, with this also protecting her and him from any attempts by the authorities to claim ill-treatment, as an excuse for taking her away from the family.  All of this, it should be said, will seem quite reasonable to anybody who has had dealings with the Soviet, and later, Russian authorities.  During the first trial, witnesses confirmed that advice about monitoring children’s development was often given.

The photos were initially considered by a Karelian art historian, Sergei Sergeyevv, to be ‘pornographic’  The court then asked for an official expert assessment, with this task given to the so-called Centre for Socio-Cultural Expert Assessments ["Центр социокультурных экспертиз"].  This body, notorious also for its involvement in the trial of the Pussy Riot punk group and in the ruling prohibiting the Jehovah’s Witnesses as ‘extremist’.  The Centre reportedly did not have a licence for such ‘expert assessments’, but this did not stop it from issuing an assessment asserting that nine of the large number of photos were ‘pornographic’.

It was this assessment, given by individuals with no particular competence and no licence to make such assessments, that formed the basis of the charges against Dmitriev.  The assessment was rejected in court by Dr Lev Shcheglov, the President of the National Institute of Sexology, as well as two other specialists who saw nothing pornographic in the photos and who confirmed that it was common practice in Russia to take photographs for such medical purposes.  With the trial in tatters, the prosecutor tried to get ‘a psychiatric assessment’ from the notorious Serbsky Institute, however even the psychiatrists there found no aberrations.

On 5 April 2018, the Petrozavodsk Court under Judge Marina Nosova acquitted Dmitriev of the ‘child pornography’ and ‘depraved acts’ charges.  She found him guilty of the third charge that had almost been forgotten – of possession of a firearm, in connection with a rifle barrel which he had found and taken inside so that young kids did not pick it up.  This enabled Nosova to not hand down a total acquittal which is essentially unheard of in Russia, especially in political cases, and pass a 2.5 year sentence (which only slightly exceeded the time that Dmitriev had already spent in custody).

This was challenged by the prosecutor Yelena Askerova, who had demanded a shocking 9-year sentence.  On 13 June 2018, the acquittal was revoked by the Karelia High Court, and the case sent back for ‘re-trial’ under a different judge. The sole arguments provided during the appeal hearing were objections from Natasha’s grandmother, who had not seen her since she left her in the children’s home.  There were also excerpts from questioning of the child after the acquittal, and thus 15 months after she was taken from the only family she had ever known.  This was supposed to demonstrate a disturbed psychological state (‘suicidal moments’).

On 27 June 2018, Dmitriev was re-arrested, with Russia’s Investigative Committee now charging him with ‘acts of a sexual nature’, also against his adopted daughter, whom he had not seen since his arrest in December 2016.  Having taken the little girl from the only people who had ever loved and cared for her, the prosecution used her age as excuse for holding the trials behind closed doors.  Her age was not a problem, however, for the FSB who had very clearly passed the photos of the child to two Russian propaganda channels in January 2017, and then prior to the appeal hearing this year.

It only became clear (from an article by Nikita Girin, first published in Novaya Gazeta and available in English here) shortly before the end of the second trial, what the charges were about.  The prosecution claimed that Dmitriev had on several occasions touched his adopted daughter around her groin.   This was in connection with a period when Natasha was 8 years old and began having attacks of enuresis (involuntary urinating).  If Dmitriev noticed the tell-tale smell of urine, he would, like any other parent, pat the little girl’s knickers around the area of the groin to see if they were wet, and if necessary get her to have a wash. There is confirmation in Natasha’s medical records that she was suffering from enuresis, and that she was due to be placed in the Karelia hospital for a proper check-up soon after Dmitriev’s first arrest, yet the prosecution claimed that these were ‘acts of a sexual nature’.

It is clear from excerpts of the questioning, published in Girin’s article, that Natasha answers questions quite differently in front of her grandmother, and when away from the latter.  The defence also produced testimony from Russian Academy of Sciences Russian Language Institute experts who gave damning assessments of the manipulative questioning of the young girl, the leading questions used, etc.  In addition, a psychology professor from Moscow State University studied the texts of the child’s conversation with a psychologist and noted that Natasha’s testimony about Dmitriev’s actions did not meet the standard criteria for recalling traumatic experiences.

It was the second acquittals that the Karelia High Court overturned on 29 September, with judge Alla Rats also increasing the sentence to 13 years in a harsh regime penal colony, something that the 64-year-old Dmitriev would be unlikely to survive.

The ruling was passed after a hearing behind closed doors in the absence of Dmitriev’s lawyer and with Dmitriev himself prevented from being present and from properly hearing the proceedings.  These gross irregularities will doubtless have been listed in the cassation appeal which Anufriev has now filed, on Dmitriev’s behalf, against the ruling.

The ruling was condemned, among others, by Dunja Mijatović, Council of Europe Commissioner for Human Rights and by the European Union.  The latter considers, it wrote, that “Mr Dmitriev’s prosecution was triggered by his human rights work and his research on political repression in the Soviet period. <> This is yet another blatant example of unjustified and unacceptable legal pressure on human rights defenders in violation of international commitments.”

Since Vladimir Putin first came to power, Russia has been increasingly concealing or distorting historical truth about the darkest pages of the Soviet period.  Dmitriev is not the only historian of the Terror to have faced such persecution, and there are also strong grounds for linking both Dmitriev’s and Sergei Koltyrin’s cases with attempts to rewrite history about the Sandarmokh Clearing and the nine thousand victims of Stalin’s Terror who lie there in mass graves.

See: Historian of the Soviet Terror dies in a Russian Prison