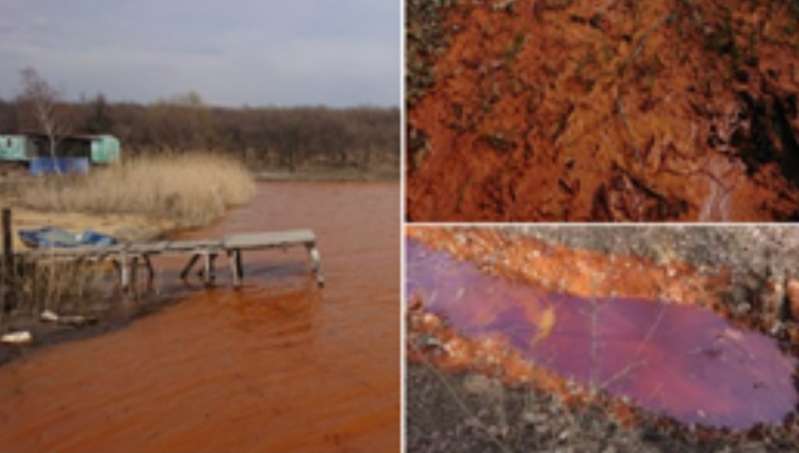 Disastrous environmental consequences are becoming increasingly evident beyond occupied Donbas due to the flooding of at least 39 mines in the self-proclaimed ‘Donetsk and Luhansk people’s republic’ [hereafter ORDLO].  The potential dangers are extremely grave, and probably include nuclear contamination, however neither Russia, nor its proxy ‘republics’ are doing anything to resolve the problems.

None of this, strictly speaking, is a new problem.  According to hydrogeologist Yevhen Yakovlev, coal mines began closing in the early 2000s, as the cost of pumping out water increasingly negated any profit from the coal extracted.  The danger of simply flooding mines was understood, however, Yakovlev says, successive governments put off the expensive task of developing the pumping system needed to prevent dangerous problems with rising water levels in disused mines.

The problem escalated dramatically with the seizure of control of large areas of Donbas by Russian and Russian-controlled militants in 2014.  They began closing down mines, claiming that the pumps were too expensive to repair.  This aroused international alarm in April 2018 when it became clear that the militants in the so-called ‘Donetsk people’s republic’ were planning to flood the Yunkom (Yuny Komynar) former coalmine which was used for a nuclear test in 1979 by simply turning off the pumps. This has led to a situation where the mine and the capsule, in which a nuclear device was detonated on 16 September, 1979, were under water.  It is precisely because nobody could know how the capsule would react under water that the Ukrainian government at least maintained those pumps in good condition.  Then the area came under militant control, and Russia, which expends vast amounts of money on sophisticated military equipment, etc., was clearly not willing to pay for the pumps. They have come up with ‘experts’ who deny that there is any problem, however they are also resisting Ukraine’s demand that the International Atomic Energy Agency be invited to inspect the site.

In October 2017, Yakovlev and Serhiy Chumachenko warned that the flooding of all the mines, including Yunkom, “creates a risk of practically uncontrolled flooding of the Klivazh facility [the underground chamber, or capsule, where the nuclear explosion was carried out, and the immediate surroundings].  The consequences of this are difficult to predict precisely but may include the contamination of groundwater and the wider geo logical environment with anthropogenic radionuclides. This may lead to a risk from radiation to human health and life.”

Unfortunately, such warnings appear to have been well-founded.  Mykhailo Shtekel, writing for Radio Svoboda, has reported on tests recently carried out in the Donetsk oblast city of Toretsk and surroundings.  He writes that experts had long warned that this area could be particularly badly affected by the flooding of mines in militant-controlled Donbas.

As part of an EU-supported ACTED project, 20 samples were taken from mine water, bore holes and wells.  Only two of the samples were close to the norms for drinking water, while the water from miners had a concentration of elements which was highly that that admissible even for water used for other purposes.

The Donetskgeologia experts, who carried out the tests, warn of very grave consequences if the flooding of these mines continues.  These included the release of large amounts of water with excessive mineralization, causing deterioration of ground soils, swamping and salination of the soil; as well as subsidence, potentially leading to the collapse of buildings and other structures.

In speaking with Radio Svoboda, Yakovlev called the situation close to catastrophic.  He explains that the mines near Toretsk that are under water are connected to those under neighbouring (and militant-controlled) Horlivka where there is much more water because the pumps are not working.

With the water level rising, this means that the functioning mines in Toretsk are in danger, with the fluctuations in water level causing sharp changes in pressure.

Yakovlev believes that the rising ground waters could also increase seismic activity in the area.  For over half a year in 2019, residents of Makiyivka complained of constant underground jolts.  In Chihary, near Toretsk, in February 2018, land caved in five metres, damaging water pipes and in general the mines cannot hold the amounts of water flowing into them.  This means that water with excessive mineral compounds is containing the local Severny Donet river, a source of drinking water.

In March 2020, photos were posted on Twitter, which appear to indicate severe discoloration and contamination of a reservoir in occupied Yenakiieve, near Donetsk.  Eoghan Darbyshire, a researcher for the Conflict and Environment Observatory set about investigating this information and other evidence of contamination from abandoned mines in occupied Donbas.

His findings, like the images posted on Twitter, were alarming.  He succeeded in confirming that the source of the contamination was acid mine drainage from the Chervony Zhovten [Red October] Mine. He wrote in late April that “The flooding may have resulted in acidification and mobilisation of heavy metals into the local groundwater and riverine environment, with potentially significant impacts for human health and wildlife. Of additional concern is that the mine is hydraulically connected to the Yunkom mine, the site of an experimental nuclear explosion in 1979. It is possible that radionuclides may also have been released into groundwater and the wider environment.”

He believes that the incident demonstrated that the situation was worsening and confirmed the urgent need for on the ground monitoring.

This is happening in government-controlled Ukraine, but not in the areas under Russian-controlled and funded militants.

While the latter appear to be ignoring all of the above-mentioned environmental effects, they may be unable to turn a blind eye to one other, namely the lack of water in rivers and reservoirs which the militants stopped pumping out from the mines.  In July 2020, Donetsk (exiled) journalist Denis Kazansky explained that the militants had long muffled this problem as well, but had recently admitted it – just without any solution.