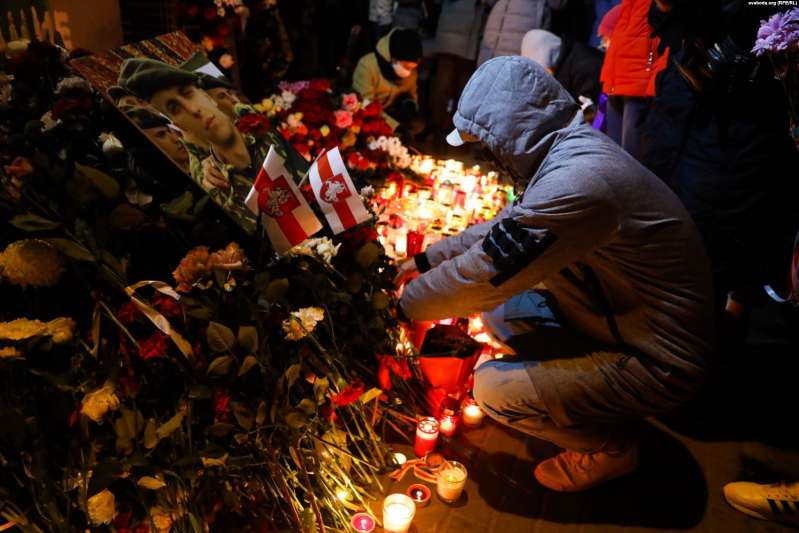 Belarusian police detained more than 1,000 people on November 15 during protests across the country demanding the resignation of strongman Alyaksandr Lukashenka and a new presidential election following a disputed vote in August.

The Vyasna human rights group said most detentions were made in Minsk, where black-clad security forces used tear gas and stun grenades to disperse thousands of demonstrators. Two people were beaten by masked security officers inside a grocery store.

At least 18 journalists -- including four contributors to RFE/RL’s Belarus Service -- were among those detained in Minsk and other cities, according to the Belarusian Association of Journalists.

Most detentions were made in Minsk, where black-clad security forces used tear gas and stun grenades to disperse thousands of demonstrators.

The protesters carried the banned white-red-white flags that have become a symbol of the political opposition in Belarus and carried placards in commemoration of Raman Bandarenka, a 31-year old anti-government supporter who died in a hospital on November 12 after reportedly being badly beaten by masked security forces.

Demonstrators chanted, "I’m going out," the last known written words of Bandarenka, and other slogans such as, “Lukashenka! Tribunal!”

Mobile Internet was down and several subway stations in the center of the capital were closed, while several streets and squares were cordoned off by police.

Detentions were also reported during smaller demonstrations in Homel, Hrodna, Mahilyou, and elsewhere.

Opposition leader Svyatlana Tsikhanouskaya, who has said the vote was rigged in Lukashenka’s favor and considers herself the rightful winner, described the crackdown on protesters with "gas, grenades and firearms" as "devastating" and called for international support for the demonstrators.

"We ask our allies to stand up for the Belarusian people and human rights. We need a humanitarian corridor for the injured, support for the media, international investigation of crimes," she wrote on Twitter.

Tsikhanouskaya left Belarus for Lithuania after the vote amid threats to her and her family.

Lukashenka, who has ruled Belarus for 26 years, on November 13 vowed not to hand over power and slammed his political opponents and demonstrators.

Lukashenka said his country should integrate with Russia, which has supported him in the ongoing standoff, and Moscow-led organizations to avoid what he called "color revolutions" -- a term often used to describe pro-Western political upheavals.

His remarks came as the European Union again condemned violent crackdowns against Belarusian protesters and threatened to impose more sanctions on Minsk.

Several protesters have been killed and thousands of people arrested since authorities declared Lukashenka the landslide winner of the vote.

There have also been credible reports of torture during a widening security crackdown.

Most of the country’s opposition have been arrested or forced to leave the country.