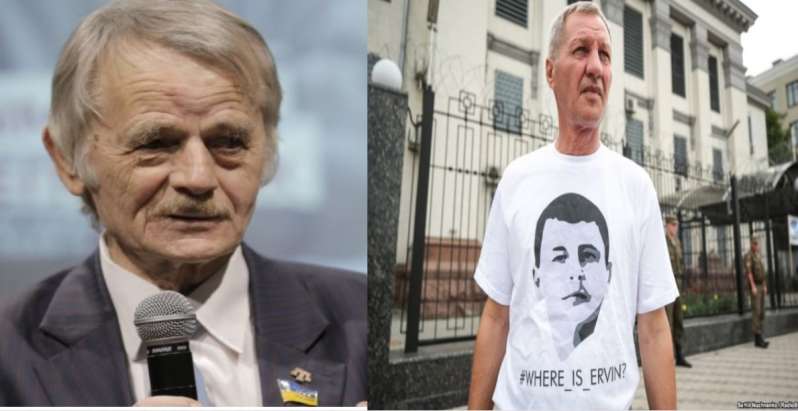 Russia’s ‘trial’ of Mustafa Dzhemilev was always going to be absurd. The world-renowned Crimean Tatar leader was banned by the Russian invaders from entering his homeland back in April 2014, and is now being tried in his enforced absence for having endeavoured to return to his home in Simferopol on 3 May that year.  If that were not surreal enough, a Russian-controlled court in Armyansk has ordered that Ervin Ibragimov be forcibly brought to the court to give testimony, four years after the Crimean Tatar activist was abducted by men in Russian road patrol uniform and disappeared without trace.  While we can only hope that Ervin will be brought to the next hearing on 3 December, it seems likely that these ‘summonses’ are the latest brutal cruelty to the young man’s parents.

Russia’s decision earlier in 2020 to stage three trials of Crimean Tatar leaders whom it had exiled was clearly linked with the March of Dignity from mainland Ukraine to Crimea, scheduled for 2 May.  This needed to be postponed because of the pandemic, however Russia has blundered on with its compromising imitations of trials against Mustafa Dzhemilev, Crimean Tatar Mejlis leader Refat Chubarov and Lenur Islyamov.

The main charge against Dzhemilev is of having illegally crossed what Russia is claiming is its ‘state border’ at the administrative border crossing between mainland Ukraine and Crimea on 3 May 2014.  The Crimean Tatar leader, , who has twice been nominated for the Nobel Peace Prize, is accused, under Article 322 § 3 of Russia’s criminal code, of having, as “a foreign national” tried to cross this fictitious border despite knowing that he had been banned from entering “the Russian Federation”.  What is more, Russia is claiming that this supposed illegal crossing was carried out “by a group according to prior conspiracy”.

None of the questioning so far seems to have gone to plan.  On 13 November  (Dzhemilev’s 77th birthday!) there was just one prosecution witness, Artem Latyshev. He was working, seemingly for the Russian FSB border guard forces, at a crossing near Armyansk on 3 May 2014 and told the Armyansk City Court that he had not seen any signs, etc., backing Russia’s claim that there was a ‘Russian state border’ there. Nor had he seen Mustafa Dzhemilev make any attempt to pass through the barrier.  Latyshev said he had seen him speak with the Russian-controlled ‘management’ who had arrived by helicopter and had then got back into the car and drove back towards the Kherson oblast.

Dzhemilev is a Ukrainian MP and was in Kyiv when Russian soldiers without insignia seized control in Crimea. He returned to Simferopol for the first time after that on 19 April 2014.  One of his actions after reaching the Mejlis  offices in Simferopol was to order that the Ukrainian flag be reinstated over the building in its rightful place next to the Crimean Tatar flag.  It was almost immediately after this, on 22 April, that Dzhemilev was presented with a scrappy unsigned document calling him a ‘foreign national’, as a citizen of Ukraine, and banning him from entering Crimea under Russian occupation until April 19, 2019.  Both Moscow and its puppets in Crimea denied any knowledge of this ban for the next 10 days, until it was enforced on 2 May 2014, when Dzhemilev tried to fly to Simferopol, via Moscow.

The Mejlis, or self-governing body of the Crimean Tatar people, responded by calling on Crimean Tatars to come to Armyansk and accompany Dzhemilev to Simferopol. Around five thousand people came, but were confronted by huge contingents of Russian enforcement officers and soldiers and Dzhemilev finally decided to return to Kyiv, rather than risk bloodshed.  Arrests over the events that day were to mark Russia’s first politically-motivated prosecutions.

Ervin Ibragimov has not been seen since 24 May, 2016, when the young civic activist and member of the Executive Committee of the World Congress of Crimean Tatars, was abducted from near his home.  Although video footage showed Ibragimov being stopped by men who seemed to be in road patrol uniforms and taken away by force, the occupation authorities never made any real attempt to find his abductors, with the suspicion strong that this was because they knew perfectly well who was behind this latest of many enforced disappearances under Russian occupation (details here).

That same occupation regime is now demanding that he be brought by force to give testimony in the political trial of Mustafa Dzhemilev.