Ukrainian political prisoner: “I didn’t come to Moscow on a tank. You came to me in Crimea” 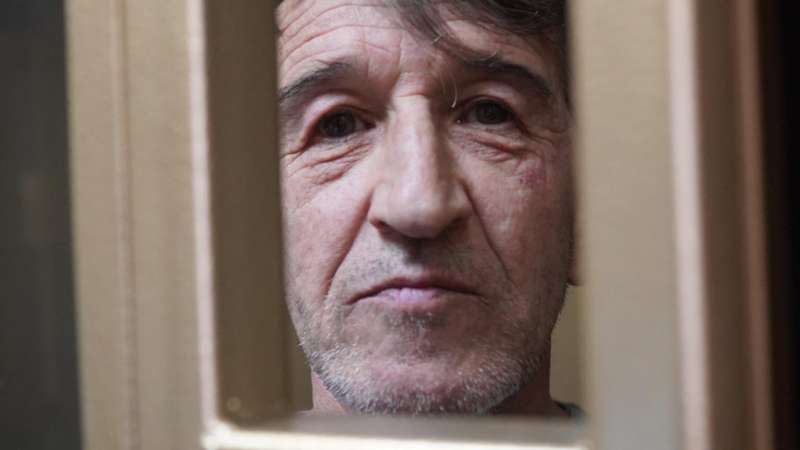 Russia’s FSB have accused 63-year-old Oleh Prykhodko of planning serious terrorist attacks, yet they stopped searching his two garages after ‘finding’ a bucket with a small amount of explosives in the first garage.  The phone, which the defence believe was also planted, has the wrong dates and is registered in somebody else’s name, but this too the FSB saw no need to investigate.

During the 13th hearing in Rostov (Russia) on 18 November, the defence asked a huge number of technical questions about the phone, its location and registration, which Prykhodko was clearly not following.  His daughter and friends have all confirmed in court that the 63-year-old’s technical skills stretch far enough to enable him to make calls and use Skype, but absolutely not send text messages and use a memory drive, both of which form part of the surreal charges against him.

The defence applied for the person (Sergei Zavyalov) in whose name the phone (or its sim-card) was registered to be summoned for questioning.  Since the provider has provided information showing that during the critical period (from 14 September 2019 to 6 April 2020) when Prykhodko is supposed to have corresponded, via text messages, with ‘an unidentified individual’ in Lviv, the phone was registered to Zavyalov, the latter’s testimony is evidently important. Prosecutor Sergei Aidinov objected, claiming that the sim-card had been registered in the name of a non-existent person and that this would simply draw out the trial. He claimed that the investigators had established that Zavyalov did not exist.  One of Prykhodko’s lawyers, Nazim Sheikhmambetov pointed out that they had been demonstrating from the beginning that the entire prosecution is the result of FSB falsification.  The FSB document asserting that Zavyalov never existed arouses serious doubts given that there is nothing at all in the material of the case to indicate that any measures were taken to establish whether the person was real or merely a name.  This is particularly suspicious since the purchase of a sim-card on the basis of a fictitious document does actually constitute a crime.

Cheeringly, despite the prosecutor’s opposition, presiding judge Aleksei Magomadov allowed both of the defence’s applications – to summon ‘Mr Zavyalov’ and to ask for the documents from MTC which would establish the physical location of the phone at the relevant time.

Prykhodko was arrested on 9 October 2019, a month after the first significant release of Ukrainian political prisoners, including Volodymyr Balukh, whose case in many ways was a precursor to Prykhodko’s.  Both men openly expressed their position on Russian occupation and had a Ukrainian flag over their homes.  Both had experienced multiple forms of harassment before the FSB turned up and claimed to have ‘found’ either ammunition, in Balukh’s attic, or explosive devices, in Prykhodko’s garage.  All such previous harassment meant that the men would have needed to be suicidally reckless to have kept anything illegal in homes just waiting for the next FSB search. Prykhodko also used the garage where the FSB allegedly found inflammatory substances (Molotov cocktails) as a workshop for metalwork and the soldering equipment, etc. meant that any such substances could have caused a serious fire. As mentioned, it is also telling that the FSB left after allegedly finding explosives in the first garage, without searching the second.  There seems only one possible explanation for such behaviour, namely that they knew there were no grounds to search the second garage, as the explosives had been planted in the first.  The men who came ‘to search’ Prykhodko’s garage brought their own ‘official witnesses’ with them.

Russia’s claim that Prykhodko was planning to use the explosives to blow up the Saki city administration building seems to be based solely on the allegedly found explosives.  It was only after the defence were finally able to see the case material in January 2020 that a second, truly bizarre, charge emerged.  Prykhodko is accused of having planned to set fire to the Russian general consulate building in Lviv, Western Ukraine, with the alleged ‘proof’ of this lying in the disputed phone.

Krym.Realii has produced a video about Prykhodko for his 63rd birthday on 21 November 2020.  In it, he explains that he is convinced the persecution is because of his pro-Ukrainian position, and notes: ““I didn’t come to Moscow on a tank. You came to me in Crimea”