Russia accuses Netherlands of hostile actions in seeking justice for MH17 victimsMH17 and the weapons of death that Russia is still bringing to UkraineMH17 witness reports Russian military personnel were at Buk missile launch site298 Empty Chairs: Victims’ families demand Russia admit liability on eve of MH17 trialMoscow attempts to get trial of key Russian MH17 suspects moved to RussiaDutch Prosecutor accuses Russia of deliberately hiding important MH17 suspectIntercepted calls prove Russian government control of militants in Ukraine on eve of MH17Russia hides MH17 suspect, then uses him for lies about the disaster and about ‘civil war’ in UkraineHow can Russia deny responsibility for MH17 when it gave up Sentsov, others to get key witness out of Ukraine?MH17 suspect release incriminates Russia, but leaves Ukraine compromisedFamilies of MH17 victims call for honesty and justice from Russia as the lies continueThree out of four MH17 suspects are ‘former’ Russian FSB or military intelligence officersRussian Twitter ‘false flag’ operation to blame Ukraine for MH17 broke all recordsEuropean Court of Human Rights demands answers from Russia over downing of MH17 over UkraineNext step the Hague after Russian military source named for Buk missile that downed MH17Russian TV produces ‘witness’ of Ukraine downing MH17, then quickly removes reportRussian media twist Bellingcat study to find Ukrainian Buk in Donbas before MH17Incriminating Video, Endless Lies and Putin’s ‘Premature’ Tribunal on MH17Russian LifeNews inadvertently told the truth about downed Malaysian airlineMilitants accused of deliberately shooting at Severodonetsk residential area
• Topics / Terrorism 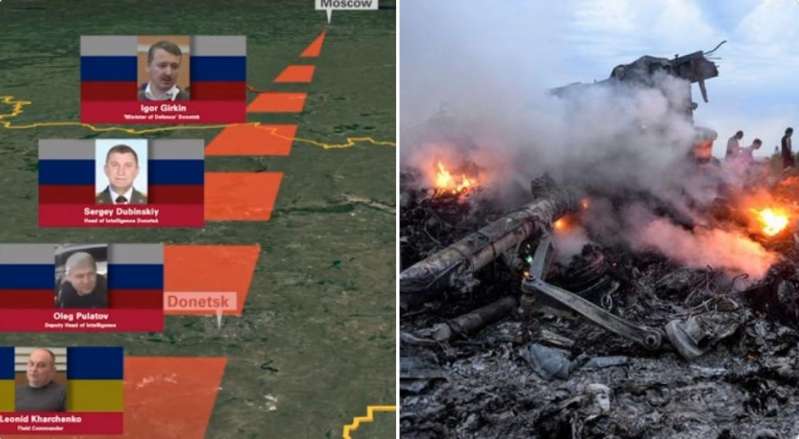 25 November 2020 the District Court of the Hague rejected the defence’s request for yet more time to investigate ‘alternative versions’ for how Malaysian Airliner MH17 was brought down over militant-controlled Donbas on 17 July 2014, killing 298 passengers and crew. This means that the pre-trial stage is over, and the charges will be examined on their merits from 1 February 2021.

Russian state media reported the news with headlines claiming that ‘The Court in Holland has refused the defence’s [request] to investigate alternative versions of the MH17 disaster’.  This is not the case since back on 3 July 2020, the court granted the defence’s applications for numerous additional interviews, questioning, and study of alternative versions.  At the beginning of November, the defence asked for more time for such an investigation, and it was here that the court rejected most of the applications from the defence  regarding such further investigation into claims that MH17 had been downed by a Ukrainian CY-25 fighter plane or by a Ukrainian BUK missile.

In a lengthy explanation of the court’s position, presiding judge Hendrik Steenhuis noted that the principle of equality of arms does not entitle the defence to totally re-investigate a case.  He stressed also that ensuring that justice is served means that there must be a reasonable timeframe for the court’s investigation.  The scheduled beginning of the trial on its merits will take place almost exactly 11 months after the pre-trial stage began, yet the defence was still asking for yet more time to investigate alternative versions which the prosecution has discussed and provided grounds for rejecting them in its presentation.  It was also demanding essentially pointless requestioning of experts, such as those from the Netherlands Institute of Forensic Assessments who had prepared the report on the fragments uncovered of the BUK missile.  The request was rejected since all relevant information was provided in their report.

Judge Steenhuis also pointed out that the defence do not actually need alternative scenarios to prove that their client, ‘former’ Russian military intelligence [GRU] spetsnaz officer Oleg Pulatov is innocent. They will do that if they can convincingly prove that he was not guilty of the charges laid against him, pertaining to the transportation of the Russian BUK missile which downed MH17.  The judge noted to the defence that in his video address to the court, Pulatov denies having seen the disaster or knowing why it happened, but does not reject the Dutch prosecution’s basic scenario.

The judge also rejected the defence’s request to put questions to Pulatov in writing, saying that the court would like to see him in person, as they would the other three defendants: ‘former Russian FSB colonel’, Igor Girkin; ‘former’ Russian GRU officer Sergey Dubinsky, and Ukrainian militant Leonid Kharchenko.  The court did, however, agree to question Dubinsky as a witness in the case against Pulatov, although it is not quite clear how, since none of the three Russians will set foot outside Russia.

It also agreed to new questioning of witnesses who say they saw the BUK missile launcher on the day MH17 was downed and of the owner of the field from where the prosecution believes the missile was launched.  There should also be another attempt to speak with the head and other members of Russia’s 53rd Anti-Aircraft Missile brigade from Kursk, which has been identified by investigators as having transported the missile launcher.

Pulatov’s two lawyers had presented a large number of applications for additional investigations during the three hearings at the beginning of November, with at least the request about investigating alternative versions a repeat of that granted on 3 July this year.

It is, of course, for the court to determine whether there is sufficient proof against Pulatov and the other defendants.  It is, nonetheless, difficult to see any point to such endless applications for re-questioning and re-examination of ‘alternative versions’ except, perhaps, to create the impression, at least within Russia, that such ‘versions’ are still under consideration and, most importantly to put off the hearings into the substance of the chances for as long as they can.

The two defence lawyers admitted when they were first taken on that they did not know who was paying for their services. It is fairly widely assumed that the Russian state is funding this curious ‘defence’ of just one of the three Russian defendants.

The evidence against Pulatov comes from intercepted telephone calls, and since Pulatov has disputed that some of them are of his voice, Judge Steenhuis agreed to an additional expert assessment.  This, however, can only be by comparing the voice on the tape to that from other tapes, where Pulatov’s involvement is not denied, since Pulatov is refusing to appear in court.

Russia has tried to present ‘versions’ which place the blame for the downing of MH17 on Ukraine.  There is no evidence to back this, unlike the fingerprint-level proof that MH17 was downed by a Russian BUK missile and considerable evidence that it came from the 53rd Russian Anti-Aircraft Missile brigade and was returned to Russia shortly after the disaster. The ‘alternative versions’ also fail to explain why the militants themselves and Russian state television were triumphantly announcing the downing of a Ukrainian military plane within minutes of the disaster, with most such reports then removed during the evening. No Ukrainian plane was downed that evening, only a passenger airliner carrying 298 people, 80 of them children.

With Russia using its veto to block a UN investigation, a Joint Investigative Team [JIT] was formed by the Netherlands and other countries whose citizens were killed, together with Ukraine.  At a press conference on 19 June 2019, JIT announced that Girkin; Dubinsky; Pulatov and Kharchenko were to be tried in absentia.  Although none is accused of having fired the missile, the chain of command to Russia provided by the four men is believed to have played a direct role in getting the Buk missile launcher to Ukraine and subsequent events.

The Dutch prosecutor and JIT have been extremely public in demonstrating that they have considerable evidence and in inviting witnesses to come forward.

Even the preliminary hearings have brought up highly incriminating allegations, for example, that JIT has found evidence that the same Russian FSB and GRU [military intelligence] involved in state-sponsored killings abroad “are also closely involved in the armed conflict in Ukraine.”

While the four defendants are almost certain to never appear before the court in the Hague,  Moscow has a great deal to fear from the revelations that the hearings beginning on 1 February 2021 are certain to bring.