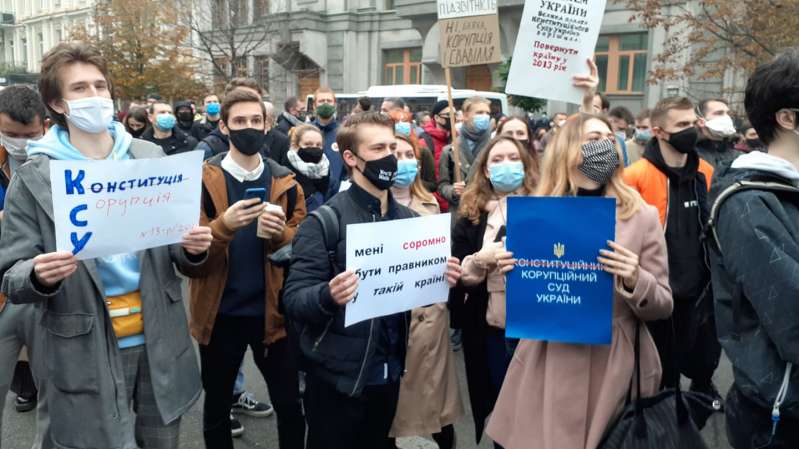 On 25 November, Ukraine’s Anti-Corruption Court revoked a ruling against former MP Hennady Bobov over his failure to list an incredible 124 million UAH worth of his own and his wife’s assets.  The same court has revoked at least one other ruling in a similar case, and has terminated several criminal investigations.  Each case certainly appeared to reek of corruption, yet the Anti-Corruption Court was left with no option following the Constitutional Court’s judgment on 27 October.  This declared both the imposition (in Ukraine’s Criminal Code) of criminal liability for false declarations and public access to officials’ income declarations to be ‘unconstitutional’.

The move led to some fairly blunt warnings from Ukraine’s western partners, in particular the EU, which had made the EU-Ukraine Association Agreement and visa liberalization contingent, among other things, upon adequate measures against corruption. President Volodymyr Zelensky reacted by submitting a bill that would both revoke the judgement and dissolve the Constitutional Court, something not envisaged by Ukraine’s Constitution and other legislation.

The warnings remain in force, the public calls for the CCU judges to resign remain unheeded, leaving the most direct results being the damage to Ukraine’s reputation and the fact that several officials have totally escaped any liability for concealing income that they can hardly hope to justify owning.  Or more, since it is quite likely that they can now demand competition for having been treated so ‘unconstitutionally’.  Immediately after the 27 October judgement was announced, evidence was reported that certain CCU had a clear conflict of interests.  In the case of the President of the Court, Oleksandr Tupytsky, his behaviour also bore the hallmarks of treason, since he had purchased property in occupied Crimea in accordance with the occupying state’s legislation. A criminal investigation was, purportedly, initiated over Tupytsky, however at present there seems little to suggest any movement on this.

In any country income declarations serve to hold officials in check and / or highlight major discrepancies between a person’s legal sources of income and actual assets.  All of that, however, is contingent upon journalists and members of the public being able to see the declarations, and on there being penalties for providing false information.

All of that has now been taken away by a court which came in for extremely worrying mention in the intercepted conversations believed to be  between the President of the notorious District Administrative Court in Kyiv [OACK], Pavlo Vovk and his colleagues.  In tapes that the National Anti-Corruption Bureau of Ukraine, or NABU, has made public, a voice that appears to be Vovk’s can be hearing boasting that “two courts belong to us, the Constitutional Court and the District Administrative Court.”

It is now almost 18 months since NABU revealed the first intercepted conversations, pointing to staggering levels of corruption within OACK.  Nothing was done about those, and the moves since the second incriminating exposures in July 2020 also seem less than decisive.  On 24 November, Serhiy Kozachyna from the Specialized Anti-Corruption Prosecutor’s Office informed that the Anti-Corruption Court had refused to order that Vovk & Co. be brought by force to a court hearing on determining a preventive measure.  The judge explained the refusal as being because on the video showing the men being informed that they were under suspicion, Vovk and the others were wearing masks.  This sounds dangerously like a carte blanche to continue ignoring summonses until the pandemic ends.

Even the criminal liability finally imposed in Ukraine’s Criminal Code, and now declared ‘unconstitutional’ had often failed to break through the general wall of impunity.  In February this year, Hennady Bobov the Anti-Corruption Court confirmed a deal between Bobov and the Anti-Corruption Prosecutor’s Service over his failure to declare 124 million UAH, whereby he merely paid a fine of 52 thousand UAH.

Hennady Bobov was, until July 2019 an MP, and holds considerable power and influence in the Cherkasy oblast.  Civic activists and Yevhenia Zakrevska, the lawyer representing the family of slain journalist and Maidan activist, Vasyl Serhiyenko, are convinced that there is sufficient evidence to bring charges against Bobov of ordering the abduction and savage killing of Serhiyenko in April 2014.

During the months before his murder, the 58-year-old journalist was reportedly involved in gathering information about Bobov and the former governor of the oblast, Serhiy Tulub .

Initially there was zero progress in finding those who had ordered the crime, but was movement in the trial of the first men arrested in connection with another crime in 2015 and found to be driving a car with traces of Serhiyenko’s blood in it.  Two other men were arrested in 2017, one of them, Vadim Melnyk, being the former head of Bobov’s guards.  There were objective reasons why the initial trial, before Melnyk’s arrest, needed to be stopped, and a new trial ordered.  The effective paralysis of this repeated trial coincided with Melnyk’s arrest and the suspicion must arise that this is because of his close links with Bobov.  While any allegations against a particular individual need to be substantiated in court, the ‘systematic obstruction’ that Serhiyenko’s widow has spoken of is clearly from somebody enjoying a high level of influence and power in the Cherkasy oblast.