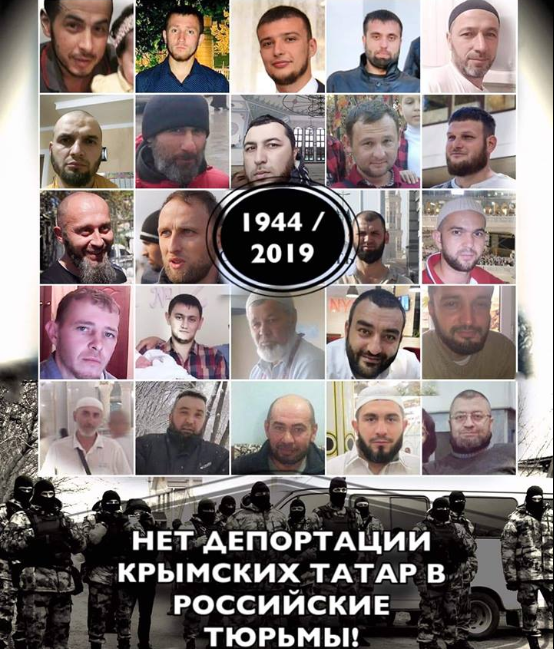 After Russia’s most flagrant offensive against 25 Crimean Tatar civic journalists and activists in March 2019 elicited huge international condemnation, Moscow is clearly trying to minimize publicity for the puppet trials expected to rubberstamp 15-20 year sentences.  Not only is one ‘trial’ being split up into five separate clones, but the political prisoners themselves, and even their lawyers, have been prevented from properly studying the case material.

Such material includes the supposed testimony of secret witnesses whose claims cannot be verified; taped conversations about religion, etc. and ‘assessments’ of such conversations by FSB-loyal ‘experts’ who can claim that a word, common in Crimean Tatar, is ‘proof’ of the charges against the men.  All of this material clearly needs to be properly studied, yet the men have consistently been denied the opportunity to do so.

The taped conversations and some video material can only be listened to or watched on a laptop, yet the FSB provided only two laptops, and two pairs of headphones, for 25 defendants and their lawyers.  There are 57 ‘volumes’ in total, although the last two were only learned about late in the day, and not even all the lawyers have seen them.  All of the men are held in the appalling conditions of Russian and Crimean SIZO [remand prisons], and there are also new restrictions due to the pandemic.  At least three of the older men (58-year-old Dzhemil Gafarov; Servet Gaziev (60) and Shaban Umerov (51) are in very poor health, which must influence the speed with which they can read and absorb the material.  Raim Aivazov is much younger, but he was held in a cell which was under quarantine for 18 days.

Despite all of this, and numerous other problems involved in providing the men with access to the material, the FSB investigators claimed that the defence was dragging out’ the proceedings, and got compliant judges to issue rulings severely restricting the amount of time the men were given.

On 25 November, the FSB formally terminated the period in which Shaban Umerov and his lawyer, Nazim Sheikhmambet, could study the case material.  Umerov had only been able to get through 39 ‘ of the 57 volumes.  Without any crime at all, Umerov could be facing a 20-year sentence (or longer), and it is a shocking violation of his right to a fair trial that he could not even learn what the prosecution is claiming.

Eskender Suleymanov was able to study only 38 of the 57 volumes, while his lawyer, Rustem Kyamilev reports that neither Suleymanov nor he were even informed of the existence of the last two volumes.

The defence have lodged various applications to have witnesses called, to question a number of experts in court and to allow interviews between the defendants and the so-called ‘secret witnesses’.  It remains to be seen whether the other applications are allowed, but any measures related to the secret witnesses are effectively guaranteed to be rejected.  Russia’s FSB have developed a whole conveyor belt of repression in occupied Crimea, with Ukrainian Muslims receiving sentences of up to 20 years’ imprisonment almost entirely on the testimony of such anonymous ‘witnesses’.

The European Court of Human Rights recently found that several Russians’ right to a fair trial had been violated because a guilty verdict and sentence had been based solely on the testimony of such secret witnesses.  There is nothing to suggest that Russia plans to comply with this ruling and change such shocking practice which, in occupied Crimea, is standardly used to imprison  Ukrainians who have committed no crime.

Although the major ‘operation’ on 27 March 2019 was condemned because Russia had so obviously targeted civic journalists and activists, it is equally shocking that the men have been imprisoned since then and are facing huge sentences without being accused of any recognizable crime.  All are charged only with ‘involvement’ in the Hizb ut-Tahrir movement, a peaceful Muslim party which is legal in Ukraine and which is not known to have carried out acts of terrorism anywhere in the world. Russia has never provided any grounds for its highly secretive 2003 Supreme Court ruling that declared Hizb ut-Tahrir ‘terrorist’, yet this inexplicable ruling is now being used as justification for huge sentences on supposed ‘terrorism charges’.   The Memorial Human Rights Centre, which has already declared the men  political prisoners, stresses that Russia has not once, in any of these prosecutions, provided any evidence of “terrorism, or even of plans or discussion of terrorist acts or the use of weapons”.

In at least one of the cases, that of Rayim Aivazov, the FSB recently changed the charge to the more serious Article 205.5 § 1 – just as they threatened to do when he retracted a ‘confession’ that they had extracted from him through torture. The aggressor state, which invaded and annexed Crimea is also charging all 25 Ukrainian citizens with “planning a violent seizure of power and change in Russia’s constitutional order” (Article 278).  Here too, there are no grounds for the charges.

It was learned in August 2020 that the case had been split up into five absolutely identical ‘trials’, with this almost certainly aimed at deflecting attention from Russia’s most brazen to date attack on Crimean Tatar civic journalists and activists informing the world about violations in occupied Crimea and helping the victims of persecution.

The defence is scathing about the move.  Lawyer Alexei Ladin explains that each of these five cases is absolutely identical and warns that this will make all court procedures much more difficult. For example, he explains, it is unclear what kind of status the defendants in one case will have in the ‘trial’ of the other men.  He calls this “some kind of quasi-juridical procedure because, according to the indictment, there is a whole group of 29, four of whom are on the wanted list.  Ladin warns that all five ‘trials’ will be made more complicated by the fact that the same witnesses will need to be questioned five times, with lots of discrepancies likely to emerge. For the moment, he says, it’s hard to imagine how it will work.

Russia has reason to want to conceal this shocking case which elicited strong protest from, among others, the US State Department, Human Rights Watch, Freedom House and Civil Rights Defenders.  The Memorial Human Rights Centre almost immediately declared the 23 men arrested on that day, and Rayim Aivazov, seized and tortured a little later, political prisoners and stated unequivocally that the FSB was using mass arrests to try to crush the Crimean Tatar human rights movement.   The arrests were both a continuation and sharp escalation in the offensive against Crimean Solidarity, the civic initiative that arose to help political prisoners and their families and to ensure that information was circulated and streamed onto the Internet about repression in occupied Crimea. Four of the men– Osman Arifmemetov ; Remzi Bekirov; Rustem Sheikhaliev; and Ruslan Suleymanov are all civic journalists, with Bekirov having, shortly before his arrest, become an accredited journalist for Grani.ru, one of the few Russian Internet publications that reports on human rights violations in Russia and occupied Crimea.

The full number of political prisoners in this ‘case’ reached 25, after Eskender Suleymanov, the brother of civic journalist Ruslan Suleymanov was arrested on 10 June 2019.