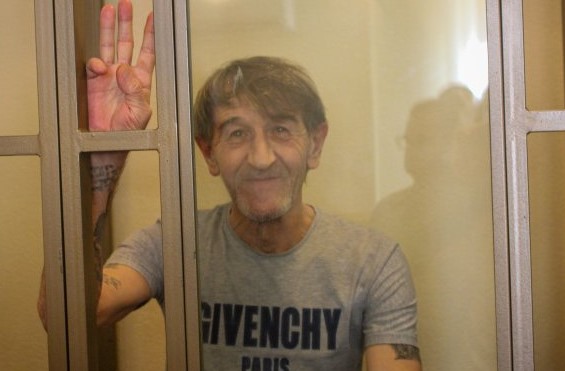 The lawyers representing Ukrainian political prisoner Oleh Prykhodko have established in court that the phone and sim-card used by Russia’s FSB as supposed proof of Prykhodko’s plan to commit an act of terrorism in Lviv are nothing of the kind.

The trial underway in Rostov (Russia) is of a Crimean who has never concealed his opposition to Russian occupation, and the outcome is essentially predetermined, but it is important that the defence is demonstrating serious grounds for believing that the evidence against Prykhodko has been fabricated.

The prosecution claims that 63-year-old Prykhodko had a phone call with an unidentified individual from Lviv in Western Ukraine, and that he afterwards discussed, via text messages plans to carry out a terrorist attack on the Russian consulate in Lviv.  Both Prykhodko and his wife denied from the beginning having ever seen the telephone which the FSB allegedly found during a search of their home, and there is considerable testimony from friends and colleagues, confirming that Prykhodko had extremely basic knowledge of how to use either a smartphone or a computer.

Over the last two or three hearings, the defence have succeeded in debunking the prosecution’s claims regarding the alleged conversation and text messages, on which one of the two charges against Prykhodko is based.  During the 15th hearing on 2 December, a representative from the Ukrainian telephone operator Life informed that the phone call during which an unidentified person from Lviv supposedly phoned Prykhodko and hinted at the latter’s terrorist plans, in fact came from the Kherson oblast, more precisely somewhere around the administrative border with occupied Crimea.

Such a call could easily have been made by the FSB, with this explaining why they have purportedly been unable to identify the man claimed to have been on the other end of the telephone.  It is also doubtless the reason that they showed no interest in the fact that the phone which Prykhodko has always said was planted on him is registered in somebody else’s name, claiming this to be a fictitious name requiring no further investigation.

During the hearing on 2 December, the defence also produced an experiment demonstrating that Ukrainian sim-cards work in occupied Crimea, but that a call or text message made with the use of such a sim-card will be registered as having been from a Ukrainian user.  This presumably means that there would be nothing to stop all of the alleged text message ‘correspondence’ to have been carried out in occupied Crimea.

Prykhodko was arrested on 9 October 2019 after two FSB officers, Vladimir Stetsyk and Andrei Zemlyakov, both of whom are former Ukrainian Security Service turncoats, supposedly ‘found’ explosives in a bucket in one of his garages.  Prykhodko’s pro-Ukrainian views had already prompted one search and (unrelated) administrative charges under Russian occupation, and he could realistically anticipate more searches.  This alone meant that, even if he had wanted to hold something illegal, the last place he should have kept it was in his own garage.  In addition, the officers seemed ‘to find’ the explosives absolutely immediately and later rejected Prykhodko’s suggestion that they search second premises, though this would be bizarrely irresponsible if they genuinely believed him to be a terrorist.

During the evening after his arrest, a person claiming to be a doctor tricked Prykhodko and obtained his biological traces.  There would have been no point in doing this illegally without Prykhodko’s lawyer present had the aim not been to use the DNA to falsify evidence.  This is a repeat of the methods used in November 2016 against Volodymyr Dudka and Oleksiy Bessarabov.  The biological traces were later ‘found’, although only on the rim of the map of Crimea that the men had supposedly used to plan their terrorist acts (details here).

The trial is taking place at the same Southern District Military Court in Rostov (Russia) where a large number of Ukrainian political prisoners have been tried and convicted on fabricated charges.