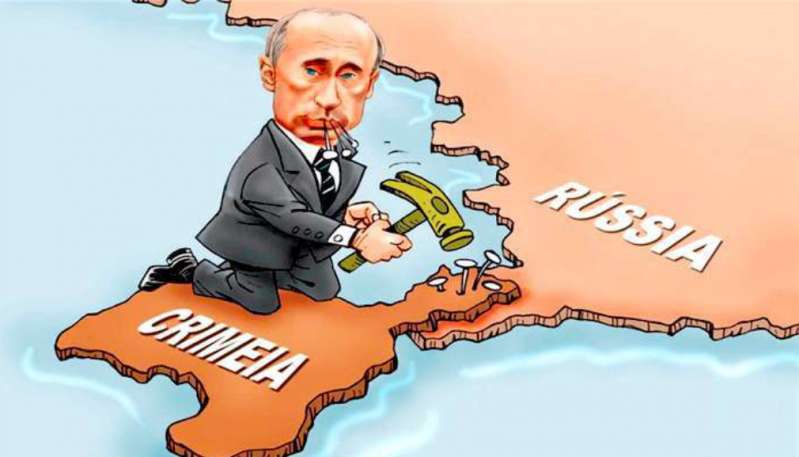 Russian President Vladimir Putin has signed into law a bill envisaging prison sentences of up to 10 years for putting an end to Russia’s illegal occupation of Crimea, or making calls to do so.  The document was signed on the day that an overwhelming majority of countries in the UN General Assembly adopted a resolution effectively demanding just that.

The Russian bill was one of several resulting from the amendments to Russia’s Constitution pushed through this year which enable Putin to remain President until 2036.  Although clinching a lifelong ‘presidency’ was probably the Kremlin’s main motive, there was another, linked with Russia’s Crimean land-grab, which the authors of the amendments essentially acknowledged at the time.  The amendments included addition of the following sentences between paragraphs 2 and 3 of Article 67:

Having illegally ‘annexed’ Ukrainian Crimea, Russia is now claiming it to be Russian territory and introducing norms in the Russian criminal code punishing for what is referred to as ‘appropriation of Russian territory or calls to this’.  The bill which Putin has signed adds a new article to the criminal code entitled ‘Violation of territorial integrity’.  This allows for a sentence of between 6 and 10 years for ‘appropriation of a part of the territory or other actions aimed at violating territorial integrity, excluding delimitation; demarcation and re-demarcation of the state border of the Russian Federation with bordering states.

For something dubbed ‘calls to violation of territorial integrity’, there would be administrative liability for the first time, then, if ‘committed’ within the space of a year, criminal liability with a sentence of up to four years imprisonment.

In fact, Russia already has criminal liability for ‘public calls to actions aimed at violating Russia’s territorial integrity’ and, as feared when it came into force in 2014, it has been used to prosecute Ukrainians and Russians for clearly spelling out Russia’s illegal occupation of Ukrainian territory.

Russia began trying to legislate grounds for refusing to comply with rules and judgements it had earlier committed itself through a law passed back in 2015 which allowed it to flout judgements of the European Court of Human Rights if Russia’s politically obedient Constitutional Court claimed them to be ‘unconstitutional’.  It is particularly disturbing that Russia has claimed the right to flout international law in the country’s Constitution and was strongly condemned by the Council of Europe’s Venice Commission in June 2020, before the rigged ‘referendum’ used to rubberstamp the amendments.

In November 2016, Putin reacted to the conclusion issued by the International Criminal Court’s Prosecutor that Russia’s invasion and ongoing occupation of Crimea constitute an international armed conflict by refusing to participate in the ICC which it had not, in any case, joined.

Neither Putin’s petulant step, nor any legislative move, can prevent Russia’s liability for war crimes and crimes against humanity, as it will hopefully soon discover over the downing of MH17 in July 2014.

The same applies to any of these attempts, post-fact, to legitimize Russia’s illegal occupation of Crimea.  This was yet again confirmed by the UN General Assembly’s Resolution, adopted on 8 December 2020  on the militarization of the Autonomous Republic of Crimea and the city of Sevastopol, Ukraine, as well as parts of the Black Sea and the Sea of Azov.

As the European Union stated in connection with the resolution, which all its member states had endorsed, “it is crucial that Russia withdraws its military forces from Crimea and ends its illegal annexation of Crimea without delay.”

“The European Union remains committed to fully implement its policy of non-recognition of the illegal annexation of Crimea and Sevastopol, which is based on the obligation not to recognize as lawful a situation created by a serious breach of international law, including through sanctions.”

Russia’s threats to bring criminal charges against western politicians, journalists, etc. who call for Russia to end its illegal occupation are mere hot air for internal consumption, and are unlikely to make President Elect Joe Biden or German Chancellor Angela Merkel tremble.  Unfortunately, these repressive laws are likely to be deployed as weapons in occupied Crimea and against Russians who do not support their leaders’ banditry, and here it would be excellent if the very welcome resolution and statement were accompanied by an intensification of international sanctions