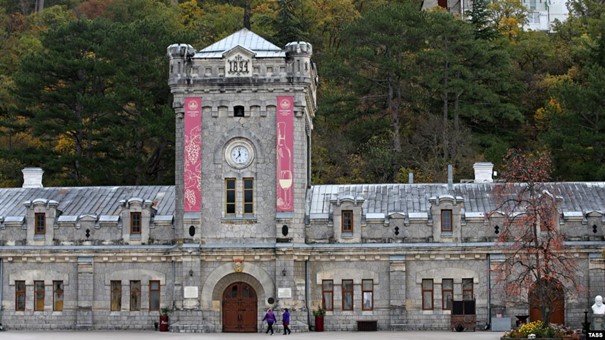 The world-renowned Massandra winery in Russian-occupied Crimea was ‘sold’ on 14 December to a subsidiary of  the Rossiya Bank owned by billionaire Yury Kovalchuk, a close associate of Russian President Vladimir Putin.  This is the second famous Crimean winery that Kovalchuk has taken part in plundering.  Such ‘purchases’ are legally invalid since Russia has no right to steal stolen assets, however the damage done to essentially priceless Ukrainian wine cellars and vineyards may well be irreparable.

It became clear back in June 2020 that Russia was planning to ‘privatize’ Massandra, with nobody in any doubt that it would go to one of the Russian oligarchs close to Putin.  A winery that even the Nazis did not touch and that had survived the anti-alcohol measures under Soviet leader Mikhail Gorbachev, was now to be plundered by the Russian occupiers, was how Ukrainian political analyst Yevhenia Horyunova put it.

Kovalchuk did not take out his wallet and ‘buy’ the winery however ‘Southern Project’ is a daughter company of the Rossiya Bank, of which Kovalchuk is the main shareholder.  The first ‘purchase’, of the Novy Svet Winery in December 2017 followed an identical format.

Officially Massandra was ‘sold’ by auction on 14 December, however since the starting price was 5.3 billion roubles and it ‘sold’ at 5,327 billion, this seems to have been an imitation ‘auction’.  The price (around 59 million euros) may seem large, however Mykola Boiko, Director of the winery for 29 years, until 2015, says that the vineyards alone (without the cellars) were valued at 6,4 billion euros back in the first decade of the 21st century.

Kovalchuk has been under US sanctions since soon after Russia’s invasion and annexation of Crimea and was reportedly dubbed ‘Putin’s cashier’.  If the billionnaire lost financially as a result of the sanctions, he has been recompensed,  becoming one of Putin’s cronies who have most benefited from the plunder of occupied Crimea, mainly via the Rossiya Bank.  Kovalchuk’s illegal involvement in Crimea was ignored by Netflix which clinched a deal with the billionaire’s National Media Group for a Russian streaming service. ]

Oleksiy Reznikov, Ukraine’s Minister for the Reintegration of Occupied Territories, stated earlier in December that all of those involved in the ‘sale’ and ‘purchase’ of Massandra will be subject to both Ukrainian and international sanctions.  Emine Dzheppar, First Deputy Minister of Foreign Affairs, pointed out that the move over Massandra is legally meaningless and promised that Russia would bear liability for this latest flagrant violation of international humanitarian law.

Massandra dates back to Tsarist times, having been created by Prince Lev Golitsyn in 1894.  First nationalized after 1917, the winery always had some degree of state protection.  According to Mykola Boiko, there were always businessmen rearing to buy the winery, but until Russian occupation, no political leader was willing to agree to this.  In 2009, to ensure that the winery remained intact, Ukraine’s President Viktor Yushchenko formalized Massandra’s national status and full state ownership.

After Russia’s annexation, Massandra was first illegally ‘handed’ to Putin’s ‘Department of Affairs’, but was then placed in the ‘property’ of the Russian occupation authorities – presumably as a step closer to privatizing it. That this privatization was imminent became clear with the announcement on 27 May 2020 that the Russian-controlled ‘Crimean parliament’ had added Massandra to their list of sites planned for privatization in 2020.  The ‘auction’ was formally announced in October.

Until Russia’s invasion and the sanctions imposed by both the EU and the USA, Massandra wines were sold at Sotheby’s, and had won around 250 gold medals.  The cellars have now doubtless been plundered, but did hold over a million bottles of wine.