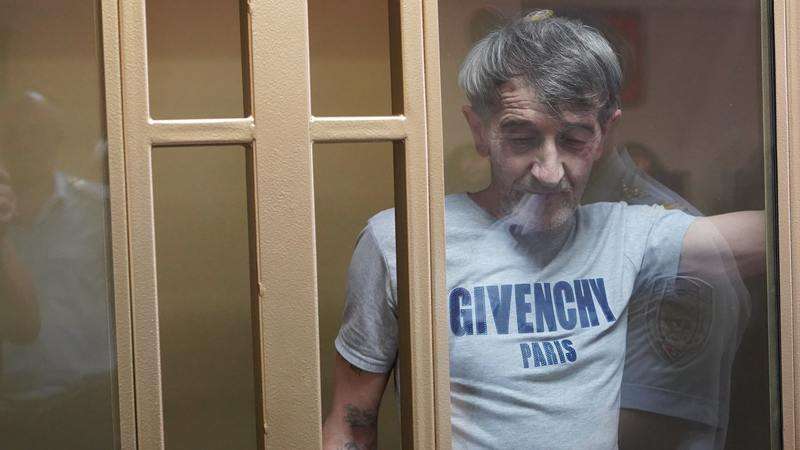 The Russian prosecution has demanded an 11-year harsh regime sentence against 63-year-old Oleh Prykhodko although the charges against him were consistently demolished in court, and shown to be flagrantly falsified.  Prykhodko has never concealed his pro-Ukrainian views, and there are very strong grounds for believing that these are the reason he has been imprisoned since 9 October 2019.

Prykhodko’s ‘trial’ on terrorism charges has been taking place at the same Southern District Military Court in Rostov-on-Don (Russia) that earlier passed horrific sentences against Ukrainian filmmaker Oleg Sentsov, Crimean Tatar human rights activist Emir-Usein Kuku and very many other Ukrainian political prisoners.  Claiming that Prykhodko’s ‘guilt’ had been proven,  prosecutor, Sergei Aidinov, asked that the first three years of the sentence be in a ‘prison’, the harshest of all Russia’s penitentiary institutions, followed by another 8 years in a prison colony.  He also asked for a prohibitive 200 thousand rouble ‘fine’

According to Nazim Sheikhmambet, one of Prykhodko’s lawyers, the defence will be presenting their position at the next hearing on 23 December.  It is possible that Prykhodko will give his final address that day, with sentence expected before the end of the year.

Prykhodko was arrested on 9 October 2019, a month after the first significant release of Ukrainian political prisoners, including Volodymyr Balukh, whose case in many ways was a precursor to Prykhodko’s.  Both men openly expressed their position on Russian occupation and had a Ukrainian flag over their homes.  Both had experienced multiple forms of harassment before the FSB turned up and claimed to have ‘found’ either ammunition, in Balukh’s attic, or explosive devices, in Prykhodko’s garage.   Such previous harassment was just one of the reasons why it was most unlikely that the men would have been holding something illegal just where they could expect the Russian FSB come and find it.  In Prykhodko’s case, he also used the garage where the FSB claimed to have ‘found’ inflammatory substances as a workshop for metalwork and the soldering equipment, etc. meant that any such substances could have caused a serious fire.  This alone made the claimed discovery seem most implausible, however there was more. Prykhodko, who lives in the village of Orekhovo (Saki region of Crimea) has two garages, however the FSB refused to search the second garage after ‘finding’ a bucket with the explosive substances in the first.  This is not the behaviour of enforcement officers who genuinely believe somebody to have been planning a terrorist attack.  It does, however, make perfect sense if the officers already knew they would find nothing, as they had planted the incriminating material in the first garage.  As in all such cases, the FSB had – illegally – brought their own ‘official witnesses’ with them.

Russia’s claim that Prykhodko was planning to use the explosives to blow up the Saki city administration building seems to be based solely on the allegedly found explosives.  It was only after the defence were finally able to see the case material in January 2020 that a second, truly bizarre, charge emerged.  Prykhodko was accused of having planned to set fire to the Russian general consulate building in Lviv, Western Ukraine, with the alleged ‘proof’ of this lying in a telephone and a memory stick.  It is claimed that Prykhodko had a phone call with an unidentified individual from Lviv in Western Ukraine, and that he afterwards discussed, via text messages plans to carry out a terrorist attack on the Russian consulate in Lviv.  Both Prykhodko and his wife denied from the beginning having ever seen the telephone  (and the memory stick) which the FSB allegedly found during a search of their home, and there is considerable testimony from friends and colleagues, confirming that Prykhodko had extremely basic knowledge of how to use either a smartphone or a computer.

More importantly, the defence succeeded in debunking the prosecution’s claims regarding the alleged conversation and text messages.  It was confirmed in court that the phone call that an unidentified person from Lviv had supposedly phoned Prykhodko and hinted at the latter’s terrorist plans, in fact came from the Kherson oblast, more precisely somewhere around the administrative border with occupied Crimea.

Such a call could easily have been made by the FSB, with this explaining why they have purportedly been unable to identify the man claimed to have been on the other end of the telephone.  It is also doubtless the reason that they showed no interest in the fact that the phone which Prykhodko has always said was planted on him is registered in somebody else’s name, claiming this to be a fictitious name requiring no further investigation.  The defence were also able to demonstrate that messages used from a phone with a Ukrainian sim-card will be registered as having been from a Ukrainian user, even if all such messages (from an alleged individual in Lviv) were made from Crimea.

There are three charges – under Article 205 § 1 of Russia’s criminal code (planning terrorist acts – the Saki Administration in Crimea and Russian general consulate in Lviv; Article 223.1 (illegally preparing explosive substances) and 222.1 § 1 (purchasing or storing explosives)  There is literally no evidence for them except the ‘explosives’ allegedly found during a highly selective ‘search’ of one of Prykhodko’s garages in the presence of ‘witnesses’ whom the FSB brought with them, and text messages from a mystery phone that Prykhodko would be unable to use with an alleged ‘accomplice in Lviv’ who was, in fact, always close to, or inside occupied Crimea