Tortured and jailed or killed for the Ukrainian Flag and for supporting Ukraine in occupied DonbasWhy expel Russians ‘planning crimes for the Kremlin’ when Russia holds so many Ukrainian political prisoners?Prisoner exchange leaves most Donbas hostages in captivity and makes journalists suspiciousDesperate plea to Zelensky from relatives of hostages once again forgottenRussian-controlled Donbas militants finally free severely disabled pensioner but not her invalid sonUkrainian researcher savagely tortured for ‘confession to treason’ against Russian proxy ‘Donetsk republic’Brutal torment of young Mariupol woman imprisoned at Olenivka ‘concentration camp’ and in Russia Russians imprisoned 14-year-old boy and girls in Kherson and Mykolaiv oblasts 63 bodies of Ukrainians tortured by Russians already found in liberated Kherson oblast Former child hostage spends 7th birthday in Russian captivity for wanting to live in free Ukraine ‘Guilty’ of being Ukrainian: Teacher abducted by the Russian invaders and held incommunicado for six months While bombing Zaporizhzhia, the invaders announce plans to take Ukrainian children to Russia for ‘rehabilitation’ Silence abets Russia in torturing and risking the lives of Ukrainian hostages and POWs in occupied DonbasVovchansk Engineering Works: Dungeons on the Chechen ModelPregnant Ukrainian medic held in Russian captivity for four months Russian prisoners offered big money and ‘amnesty’ to kill for Russia in Ukraine Disappearances in the Zaporizhzhia Region (24 February to 18 June 2022)Russia extends terror and abductions from occupied Crimea and Donbas to all of Ukraine SOS! Save the civilian population in Bucha, Irpin, Hostomel!Russia kills Minsk Agreement, with lives of over 300 Ukrainian hostages and POWs in danger
• Topics / The right to liberty and security 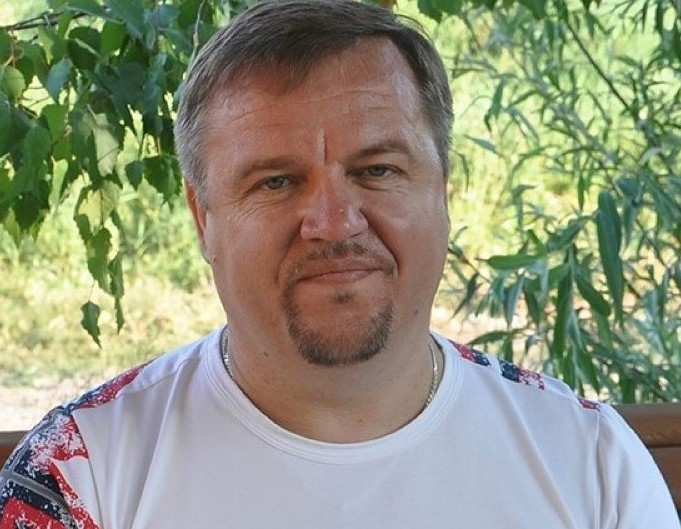 The lawlessness around the 2015 seizure of Oleh Shevandin in occupied Debaltseve was nothing new for the self-proclaimed and Russian-controlled ‘Donetsk people’s republic’ [‘DPR]].  The case does, however, stand out both because Shevandin is a well-known sportsman and public figure,  and because he was almost certainly seized by members of the Russian military whose involvement in the war in Donbas Russia continues to deny.

Shevandin had left Debaltseve as soon as the fighting began, together with his wife and adult son.  The family had never concealed their pro-Ukrainian views, and had also ensured that their elderly parents were safely out of occupied Donbas.

Unfortunately, in late April 2015, they learned that Shevandin’s 82-year-old mother had returned to Debaltseve.  Since they knew, but had not told her, that her home had been badly damaged by the shelling, they set off immediately to ensure her safety. Larisa Shevandina recalls that they were aware of the close attention they received when passing through a militant checkpoint near their home, but it was late on 30 April 2015, and there was no turning back.

Shevandin, who was then 51, set off alone the following morning to see how his mother was.  He never arrived.  Larisa began phoning around an hour and a half after he left. During that day, they allowed him to answer twice.  During that second occasion, Larisa asked “should I seek help?”.  He replied simply “yes”, something, she says, he would never have done had the situation not been immensely serious.

She tracked down witnesses who had seen her husband seized by masked men with machine guns who put a bag over his head before driving him away together with the car, and essentially stormed all the relevant bodies within the so-called ‘DPR’.  I transpired that Shevandin had been seized on the orders of Aleksandr Bushuyev, better known by his nom de guerre ‘Zarya’, the ‘commander’ of the Seventh Brigade.  This was even confirmed by Bushuyev’s deputy, although during one of the conversations Larisa had, she was told that the order to seize her husband had come “from higher up”.  Bushuyev’s subordinate, Alexander Safronov, known by his nom de guerre ‘Ural’, was later seen driving around in the car which on that first evening was at the brigade headquarters.

At the headquarters, Larisa was told that her husband had been there that morning, but that he had then been taken to Donetsk by men wearing masks.  She was told that some memory sticks and maps of the Luhansk oblast had been found in the car, an assertion that she dismisses as nonsense.  She also notes that, while at first, it was claimed that the allegations that her husband was a ‘spy’ working for the Ukrainian Security Service were under the investigation of the so-called ‘DPR ministry of state security’, later the militants themselves spoke of this being under the control of the FSB [Russia’s security service]

Larisa was told that Zarya would meet with her that evening, then Zarya himself, by phone, promised to see her the next morning.  By then, however, it became clear that both he and Shevandin’s car had disappeared.  The vehicle, which is formally owned by their son, Oleksiy Shevandin, was later retrieved after a couple tried to take it into the Russian Federation.  Larisa Shevandina points out that the vehicle had faked documents prepared in (government-controlled) Mariupol.  There does not appear to have been sufficient investigation into how this could have happened, however the aim from the militants’ point of view was presumably to deflect attention from Zarya and the military brigade.

Larisa has had no contact with her husband since the day of his abduction, but has received some information, not all of which she can reveal, which leads her to believe that he is alive.  Asked in a recent interview, she said that it is probable that he is either in one of the militants’ secret prisons in occupied Donbas, or that he has been taken to the Russian Federation.

The military context here is very important.  Debaltseve is a strategic railway hub which was under Ukrainian government control on 12 February 2015 when Russian President Vladimir Putin agreed a ceasefire with the leaders of Ukraine, France and Germany in Minsk.  Within hours of this supposed ‘ceasefire’, the DPR militants had stated that, with respect to Debaltseve, it would not be observed.  The deceit was almost certainly instigated by Putin and there is plenty of proof of heavy Russian military involvement in the battle to seize control of the city. Journalists from the Conflict Intelligence Team have produced evidence suggesting that it was, in fact, Putin who ordered the offensive.

Larisa is convinced that both Zarya and his deputy ‘Ural’ were Russian, as were others that she spoke with during those days. At least with respect to Zarya, there are strong grounds for believing him to have been from the Russian military.   On 4 July 2016, it was reported that he had been killed in a bomb blast at a railway crossing, possibly by other militants, angered over the deaths of fighters which they blamed him for.   According to Ukrainian military intelligence, Bushuyev / Zarya was acting under the cover name of Aleksandr Nikolaevich Kolosov in Donbas, and that he was a lieutenant in the Russian military aviation forces and was, in Russia, the first deputy commander of the 83rd separate paratrooper brigade.  In occupied Donbas, he was notorious for abductions and appropriating businesses.

As mentioned, Shevandin was well-known in the Donetsk oblast and beyond.  He is a Wushu and KungFu champion and the President of the Wushu and KungFu Federation for the Donetsk oblast.  He had also helped to train the Ukrainian national team.  Prior to Russia’s military aggression, he led  one of the largest and most successful sports organizations in the region, and it was thanks to him that Debaltseve hosted an inter-regional championship for around 15 years before the events of 2014.  Shevandin was also active in organizing youth programs, such as one promoting a healthy lifestyle, as well as various international projects.

Shevandin is on Ukraine’s exchange list of hostages, but Larisa is convinced that the Ukrainian authorities have never done enough to investigate his abduction and to secure his release.  She is now the Head of the Ukrainian Movement of Hostages’ Families ‘Return Home’ [«Повернення Додому»].  Although back in 2015, one of the militants told her that her husband was alive and to not rock the boat so as not to make things worse, after six years she and the families of other hostages are convinced that only maximum publicity and engagement from both Ukraine’s government and Ukraine’s western partners can help to free their relatives.  ‘Return Home’ can be contacted on povernenyadodomu2020[at]gmail.com.