Fake ‘Ukrainian fascist’ arrested and charged with working for Russia and its proxy Luhansk ‘republic’ Ukrainian hostages not forgotten but Russia understands only the language of ransoms and sanctionsEmpty promises from Ukraine’s leaders as release of Kremlin’s hostages ‘buried’Russia’s fake ‘Ukrainian fascist’ returns to Ukraine to fight against ‘fratricidal’ war in DonbasWhy expel Russians ‘planning crimes for the Kremlin’ when Russia holds so many Ukrainian political prisoners?Ukrainian researcher tortured & sentenced to 13 years for ‘treason’ against a fake Russian proxy republicPOWs tortured for defending Ukraine in Donbas and for Russian propagandaWhy is Ukraine letting Donbas militant escape justice for Izolyatsia secret prison war crimes?Prisoner exchange leaves most Donbas hostages in captivity and makes journalists suspiciousDesperate plea to Zelensky from relatives of hostages once again forgottenMoscow attempts to get trial of key Russian MH17 suspects moved to RussiaTwo suspected Maidan killers return to Ukraine, claiming they’re victims of persecutionRussian-controlled Donbas militants finally free severely disabled pensioner but not her invalid sonWhy Russia demanded the release of a ‘Ukrainian fascist’ as part of the prisoner exchange in occupied DonbasUkraine tortured and handed a probably innocent 69-year-old prisoner over to Russian-controlled Donbas ‘republic’Ukraine’s leaders further jeopardize suspected Maidan killers’ trial as Russia uses freed suspects for propagandaRussia claims Ukraine promised to terminate the trial of suspected Maidan killers freed in prisoner exchangeRussia’s ‘all for all’ exchange: those who were not returned to UkraineSuspected Maidan Berkut killers freed on eve of Donbas hostage exchangeRelease of suspected Maidan killers in prisoner exchange will help Russia destabilize Ukraine
• Topics / The right to a fair trial 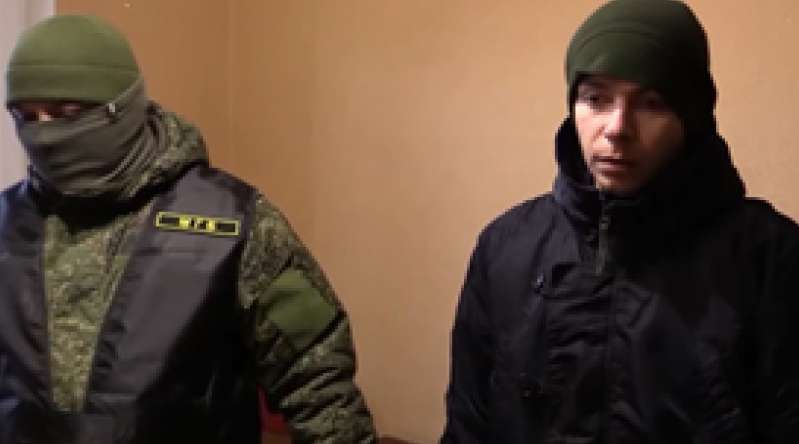 Taras Oleksiyenko was handed over by Kyiv in December 2017 as one of 238 remand and convicted prisoners whom the Russian-controlled Donbas ‘republics’ demanded in exchange for 75 Ukrainian hostages and POWs.  Almost exactly three years later, he was ‘sentenced’ by a ‘court’ in the unrecognized ‘Luhansk people’s republic’ [‘LPR’] to 17 years’ imprisonment.  As with almost all of the hostages whom ‘LPR’ also sentences to such terms of imprisonment, Oleksiyenko was accused of being an agent for Ukraine’s Security Service [SBU].  Russia and the militants are already blocking the next exchange of prisoners, and Oleksiyenko’s ‘sentence’ may well be a chilling factor for others in Ukrainian custody weighing up whether to agree to be part of an exchange.

Very little is currently known about Oleksiyenko except that he agreed to be handed over to the Donbas illegal armed formations in December 2017.  According to the information made public on 22 December by the ‘LPR information agency’, he was, at the time, in a Kyiv SIZO [pre-trial detention unit], accused of having thrown a grenade at members of ‘Right Sector’, the Ukrainian nationalist movement that Russia has systematically demonized since 2014.  According to the report, he was facing a sentence of up to 10 years, although it seems very unlikely that the sentence would have been so harsh.

The exchange took place on 27 December 2017, with Oleksiyenko landing in ‘LPR’.  According to the story produced by the latter for local and Russian state-controlled media,  Oleksiyenko became part of the so-called ‘people’s militia’, the ‘LPR army’.  It is now claimed that this was all part of his SBU-organized ‘front’.  Oleksiyenko is shown, on tape, explaining how he was ‘recruited’ by the SBU who threatened his family if he didn’t agree.  His ‘controller’ was supposedly somebody called Denis Romashkin, and his task initially was to provide information about those in this ‘army’ and about the movement of military equipment.  They then go on to claim that in 2019, he was supposed to carry out a terrorist attack during a mass event.  Asked during a supposed ‘investigative experiment’ what his aim was, Oleksiyenko recites, as though learned by heart, that this was in order to kill as many people as possible.  He says that this was so that the SBU could prepare a report saying that it had been carried out by the militants themselves, while the press release also asserts that the aim was to destabilize the work of the so-called ‘LPR authorities’.

The video shows three ‘judges’ from the self-styled ‘LPR supreme court’ announcing his sentence – 17 years’ imprisonment ‘for spying, planning a terrorist attack, and illegal use of explosives and ammunition’, as well as a fine, 17 times the minimum wage.

The militants in occupied Donbas are closely following Russian FSB tactics, particularly with their use of such ‘videoed ‘confessions’.   There is nothing to suggest that Oleksiyenko had an independent lawyer present during his ‘interrogation’, nor that he enjoyed any of the other elements of a fair trial.  While there is no direct proof that his story is false, the fact that he recites it to the camera does not in any way make it more credible.  Over the last almost seven years, both Russia and its proxy ‘republics’ have produced countless such ‘confessions’.  In all cases where those making them have either later been released in an exchange or have at least been given access to an independent lawyer, the ‘confessions’ have been retracted, most often with the person saying that he gave it under torture.  Here, as is generally the case, the purpose seems to be to instil fear and, of course, to push the image of Kyiv, and of the SBU, as hostile and dangerous.  Oleksyenko, and whatever methods were used to obtain his confession, were more than likely simply means to this end.