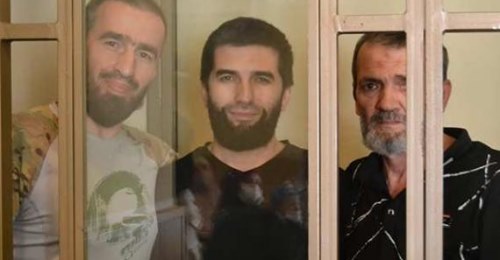 A Russian prosecutor has demanded sentences of 19, 18 and 13 years against three Crimean Tatars who are not accused of any recognizable crime.  The three recognized political prisoners: 59-year-old Enver Omerov; his son Riza Omerov (32) and Aider Dzhapparov (39), are the latest victims of the worst conveyor belt ‘trials’ that Russia has brought to Crimea, with the ‘court’ in Rostov clearly eager to pass sentence, and refusing to hear 10 of the defence witnesses.  This is the same Southern District Military Court involved in most political trials of Ukrainians since Russia’s invasion of Crimea, including Enver Omerov’s son-in-law, Rustem Ismailov.

During the so-called ‘debate’ on 23 December, prosecutor Dmitry Volkov claimed that the three men’s guilt was proven and demanded the following sentences:

Enver Omerov – 19 years’ harsh regime imprisonment, with the first three years in a prison (the worst of the Russian penal system since back in Soviet times), as well as 9 months restriction of liberty, following the main sentence.  Since the 59-year-old grandfather is not in good health, this is an effective death sentence.

Riza Omerov – 13 years’ harsh regime imprisonment, with the first three years in a prison, and then a further 6 months’ restriction of liberty.

Aider Dzhapprov – 18 years’ harsh regime imprisonment, with the first three years in a prison; followed by 14 months restriction of liberty.

These sentences are significantly higher than those a person could get, according to Russian legislation, for real crimes of violence.  Here the men are effectively accused of ‘thought crimes’, with the Russian FSB charging them with ‘involvement’ in Hizb ut-Tahrir, a peaceful Muslim organization which is legal in Ukraine.  Russia’s Supreme Court declared Hizb ut-Tahrir a ‘terrorist organization’ in 2003, with the ruling kept secret until it could no longer be challenged.  It is likely that the ruling was aimed at enabling Russia to forcibly return Uzbek asylum seekers to Uzbekistan where they faced torture and religious persecution.  Call them ‘terrorists’ and it’s OK to persecute peaceful believers for their faith, even though Hizb ut-Tahrir is not known to have committed any act of terrorism anywhere in the world.  Since early 2015, Russia has been violating international law by using these appalling charges to imprison law-abiding and devout Crimean Muslims on ‘terrorism charges’, and, in many cases as a weapon of terror to silence Crimean Tatar civic journalists and activists, or to drive Crimean Tatars from their Crimean homeland.

These ‘trials’, which are known to provide the FSB with promotion or bonuses, all follow a certain pattern, with one or more of the defendants designated as ‘organizers’ (under Article 205.5 § 1 of Russia’s criminal code) and others accused only of ‘involvement’ (Article 205.5 § 2) .  The distinction generally seems quite arbitrary, however the difference in sentences is massive, with the FSB not tolerating significant deviations from the sentences demanded in the case of the supposed ‘organizers’, in this case Enver Omerov and Aider Dzhapparov.  On 27 February 2020, it was learned that all three men were also being charged with planning violent seizure of power.  According to the Memorial Human Rights Centre, this extra charge in Russia is frequently used by the FSB against those who refuse to ‘cooperate’ with the investigators by accepting the absurd charges.  In occupied Crimea, none of the Ukrainian Muslims has agreed to ‘cooperate’, and the charges have become a standard part of the FSB’s arsenal.  Not one of the armed searches of the men’s homes found even a weapon, nor are they accused of having planned any act of violence.  The ‘terrorism’ charges and horrific sentences relate solely to a politically-motivated Supreme Court ruling in 2003.

The European Parliament and other European and international bodies have condemned all such ‘trials’ of Crimean Tatars and other Ukrainians, and the Memorial Human Rights Centre has recognized Enver and Riza Omerov and Aider Dzhapparov as political prisoners.

All three men have been in detention since 10 June 2019.  Enver Omerov was arrested at around 2 a.m. in the night from 9-10 June  while travelling to Rostov with his daughter, Fatma Ismailova, for the latest court hearing in the trial of his son-in-law, Rustem Ismailov.  Omerov  became very unwell and the ambulance brigade confirmed that he had extremely high blood pressure and needed to rest.  The enforcement officers ignored this and insisted that he come with them to the Kerch police station.  When Fatma remonstrated, and said that she would bring her father there after he had rested, an FSB officer threatened to handcuff her to the generator if she didn’t stop “getting in their way”.

It should be stressed that the problem with these ‘trials’ is not only that Russia has no right to apply its legislation on occupied territory and that the charges are profoundly flawed.  There is also no real evidence even to back the absurd charges, with the FSB instead using loyal ‘experts’ who obediently claim there to be ‘proof’ of involvement in Hizb ut-Tahrir in illicitly-taped conversations and ‘secret witnesses’ whose testimony cannot be verified.   Where these supposed ‘witnesses’ cannot remember their lines or why their identity is being concealed, either the other prosecutor Yevgeny Kolpikov, or a secret prompt is used with  prompt is used with the ‘judges’ pretending not to notice.

The date of the verdict has yet to be set, however nothing about this ‘trial’ give any grounds for anticipating that presiding judge Roman Saprunov, together with Rizvan Zubairov and Maxim Nikitin will remember the oath they once gave to serve the cause of justice.