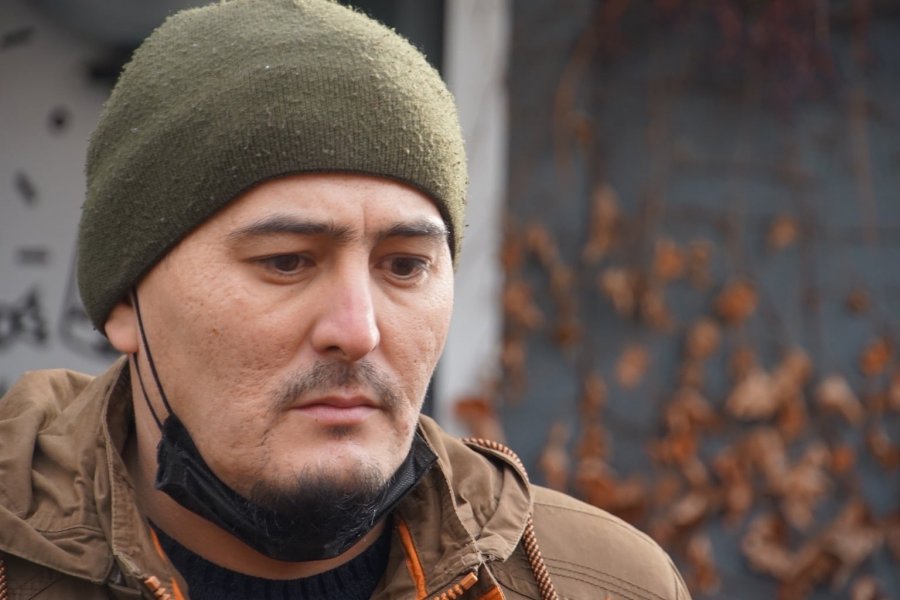 The ‘police’ in Russian-occupied Crimea effectively abducted Vilen Temeryanov on 28 December, holding the Crimean Solidarity civic journalist in custody on nonsensical charges of ‘organizing a mass event’.  Given the number of Crimean Tatar civic activists and journalists whom Russia has already sentenced or is likely to sentence to decade’s imprisonment without any crime, this offensive on administrative charges against a civic journalist was almost ‘vegetarian’.  It is, nonetheless, aimed at the same end – terrorising Crimean Tatar and other Ukrainian activists into silence or exile.

Three officers, who did not identify themselves, appeared at the civic journalist’s home in the Dzhankoy district at around 9 a.m. on 28 December.  Both Temeryanov and his wife demanded to see the men’s papers which the latter simply ignored, saying merely that “they’d tell everything in court”.  The officers’ behaviour was openly rough and sneering, and although they did finally back off and not try to put handcuffs on Temeryanov, they forced him into their car and took him away.

It was unclear for some time where he was being taken, with this almost certainly deliberately aimed at preventing lawyer Emil Kurbedinov from being present.

There are no grounds for what was far more akin to an abduction than detention, and there was no reason at all to detain Temeryanov, let alone with the use of handcuffs.  The administrative charges against the civic journalist date back to 3 November when Temeryanov, a correspondent for the Russian website Grani.ru, was detained near the Crimean military court where people were gathering to show solidarity with three Crimean Tatar political prisoners on trial in Rostov (Russia).  Two administrative protocols were then drawn up with the officers ignoring the fact that Temeryanov had been at the court as a journalist and charging him, firstly, with the standard Article 20.2.5 of Russia’s code of administrative offences.  This punishes for something loosely termed, and even more loosely interpreted, ‘infringement by a participant of a public  event of the established procedure for holding a meeting, rally; demonstration; procession or picket’.  They also came up with a charge, under Article 20.6.1 of ‘not complying with the rules of behaviour’ given the pandemic.  The latter charge has become a popular method in occupied Crimea of still further removing the right to peaceful assembly or even the right to stand in solitary, non-infectious, protest.

According to Kurbedinov, these protocols were drawn up with such infringements that they were sent back to be corrected. If they changed a spelling mistake, that appears to be all that was rectified with the charges remaining as unwarranted as before.  The police documents, for some reason, also claimed that Temeryanov is unmarried, without children.  In fact, he has three underage children, including a disabled son who was with his mother in the car when the officers turned up on Monday morning and tried to handcuff his father before forcibly taking him away.

Kurbedinov reports that the police claimed that Temeryaev was the ‘organizer of a mass event’ because people had supposedly returned placards and T-shirts to him after the ‘protest’.  It is unfortunately likely that the ‘court’ will choose to believe this nonsense, although there is no evidence that the police removed even one placard, let alone from Temeryanov.  In contrast, the journalist can show his agreement with Grani.ru that he provide coverage of the ‘court hearing’ on 3 November 2020 and sentencing of the three political prisoners: Rustem Emiruseinov; Arsen Abkhairov and Eskender Abdulganiev.

Temeryanov was released on Monday evening because ‘judge’ Aleksandr Voronoy decided that his working day had ended and postponed the hearing until 30 December.

The occupation regime’s heavy-handed measures against people showing solidarity with victims of repression began during the evening of 2 November, when almost 200 Crimean Tatars were stopped by Russian traffic police and held against their will through the night near the illegal bridge between Kerch in occupied Crimea and Russia.  The bridge itself was closed, almost certain on instructions from Russia’s FSB, to ensure that nobody could get through to attend the court hearing in Rostov (details here).

The civic initiative Crimean Solidarity arose in response to the ever-mounting number of Crimean Tatar and other Ukrainian political prisoners in occupied Crimea.  Although it also helps political prisoners and their families, it is almost certainly its role in providing information about repression that most riles Russia, given the efforts it has taken to crush freedom of speech and any independent media in occupied Crimea.  Since October 2017, Crimean Solidarity activists and journalists have themselves increasingly faced arrest and huge sentences.

Among these victims was one of the three political prisoners sentenced on 3 November 2020.  41-year-old Rustem Emiruseinov is a Crimean Solidarity activist who visited political trials, took part in flash-mobs protesting against mounting repression and in other ways helped political prisoners.  This was enough for him to be charged under Article 205.5 § 1 of Russia’s criminal code (‘organizing a Hizb ut-Tahrir group’) and sentenced on 3 November to 17 years’ imprisonment – two in a prison, the harshest of Russian penitentiary institutions, and then 15 in a harsh regime prison colony.  Arsen Abkhairov and Eskender Abdulganiev were accused of ‘involvement’ in this non-existent ‘group’ under Article 205.5 § 2, and sentenced to 13 and 12 years, respectively, also with the first two years in prisons.  The Russian FSB also added the even more surreal charge (under Article 278) of ‘planning to violently seize power’ (more details and addresses to write to here).

Hizb ut-Tahrir is a peaceful Muslim organization which is legal in Ukraine and most countries.  It was declared ‘terrorist’ by Russia’s Supreme Court back in 2003 in a secret ruling almost certainly issued in order to enable Russia to forcibly return Uzbek refugees to Uzbekistan where they were in fact facing religious persecution.  Russia is now using such entirely fictitious ‘terrorism’ charges as a form of intimidation and repression in occupied Crimea, especially targeting Crimean Tatar civic activists and journalists from the civic initiative Crimean Solidarity.