Documenting war crimes in Ukraine.
The Tribunal for Putin (T4P) global initiative was set up in response to the all-out war launched by Russia against Ukraine in February 2022.
• Topics / Against torture and ill-treatment
• Topics / Law enforcement agencies

National monitoring of unlawful violence in police in Ukraine in 2020. Summary 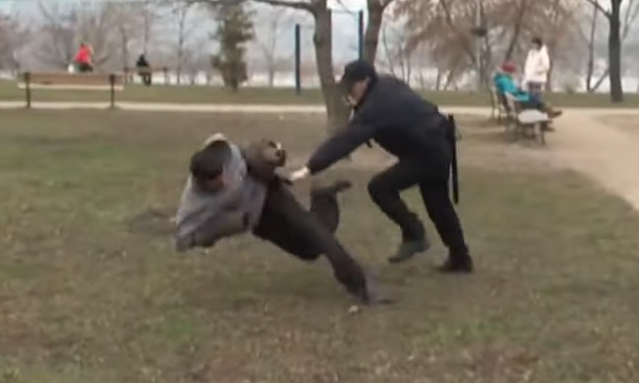 It was the eighth sociologic research of this nature (previous researches conducted in 2004, 2009, 2010, 2011, 2015, 2017, 2018. The conclusions and recommendations of the research contain the specific recommendations on preventing the unlawful violence through institutional changes in police activity. Results of the sociological research have published in the book National monitoring of unlawful violence in police in Ukraine in 2020 in Ukrainian and in English.

The following methods of monitoring and information collecting have been used:

– survey of the population of five regions of Ukraine (3 000 persons in Kyiv, Kharkiv, Lviv, Vinnitsya and Odesa regions) by the method of structured interview at the place of residence of the respondent;

– survey of 2 120 police officers by the method of questionnaires using original tools.

Key conclusions are as follows.

1. Most of the respondents assessed the police as inefficient – it was indicated by 56,2 %. It should be noted that in comparison with 2018 national research the number of people dissatisfied with the police increased by 3,5 %.

2. Among the police officers the police reform is considered successful only by every third patrol policeman (32 %) and 13,9 % of the representatives of other police units. The number of people who believe the reform to be a failure is greater among the police in general (58,5 %), and among patrol officers (37,7 %). Almost every fourth said that the reform is not finished yet.

5. Assessing the general tendencies of unlawful violence (beatings, tortures, intimidation) in the police, most of the respondents (51,8 %) indicated that they believed such cases spread. After a small decrease in the number of such cases in 2018 the scale of this phenomenon returned to the indicators of past years and constituted over 698 000 a year. The estimated number of cases of beating and infliction of bodily injuries during the arrest has also increased and constituted, accordingly, 559 140, and the number of cases of use of unlawful violence during the investigation doubled and constituted 419 355 cases a year. At the same time almost 100 000 people are subjected to various kinds of tortures (ranging from hurting and torture with thirst or non-provision of medical assistance) every year.

7. The most important factor that influences the spread of unlawful violence in the police is the lack of system of effective investigation of such cases, as well as the lack of full and objective statistical data about that phenomenon. The current system of data collection is locked on the state authorities which work in the conditions of the conflict of interests. Most of the persons whose rights were violated by the police (72,9 %) never filed official complaints. Thus, the system of investigation and collection of complaints about the police is not trusted and used. Therefore, the work of the State Bureau of Investigations and Prosecutor General’s Office cannot be called efficient – they work with a small number of cases of violence and do not even know the full picture.

8. A significant part of society (59,7 %) believes that practically any person on the territory of Ukraine regardless of their past and personal characteristics is at risk of becoming a victim of torture or ill-treatment in the police. The police officers themselves have a completely different opinion on this. In total around a half of interviewed police officers believe that nobody risks tortures and ill-treatment by the police, this opinion is more popular among the police officers (55,5 %), than patrol officers (44,9 %).

9. Comparative analysis of the researches of 2004–2020 shows that after resonant events in Kaharlyk the intolerance of the population to the cases of torture or other ill-treatment in Ukrainian police increased greatly and constitutes 79,1 %. This is the highest indicator for the entire period of research. At the same time, it should be noted that 14,9 % of the respondents accept the use of unlawful violence in extreme cases, 5,4 % – against particular persons (terrorists and persons suspected of crimes against children). A small number of people (1,1 %) believe that the work of the police is impossible without it.

11. The indicators that contribute the most to the spread of the practice of unlawful violence in the activity of Ukrainian police, according to the respondents, are: 1) impunity of the police officers who use unlawful methods in their work; 2) poor selection of the candidates; 3) low professional and cultural level of police officers.