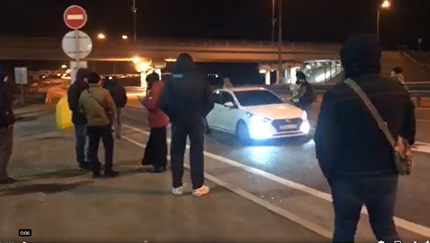 Crimean Tatars detained on 11 January From a Crimean Solidarity video

Update   Russian officials eventually detained around 120 Crimean Tatars, with all of them prevented from travelling on until the morning of 12 January, thus too late to reach the sentencing of Enver Omerov, his son Riza and Aider Dzhapparov.

Late on Monday evening, at least 17 vehicles and 59 Crimean Tatars were stopped at the entry to the Crimean Bridge as they tried to get to Rostov in Russia for the sentencing on 12 January of three recognized political prisoners.  Among those detained were several veterans of the Crimean Tatar national movement, men in their sixties.  There were no valid grounds for stopping any of the people, yet the traffic police took driving licences and car documents away, and also photographed passports, an act of overt intimidation.  According to one of the activists, Dilyaver Abduramanov, they were told at one point that this was “an operation for processing individuals of eastern nationality”.  This appalling admission of racial profiling, it should be stressed, was made by representatives of the Russian occupation regime to Crimean Tatars in the latter’s own homeland.  One of the veterans, Usein Velikhayev noted that everybody was being let through, except Crimean Tatars. He asked an FSB officer present why they were only stopping Crimean Tatars, and was told they could not comment.  “This is a kind of Crimean Tatar reservation”, Velikhayev added. The events only confirmed the bitter comparison with earlier Russian persecution of Crimean Tatars made in their powerful final addresses on 11 January by the three political prisoners, Enver Omerov; his son Riza Omerov and Aider Dzhapparov.

The heavy-handed measures against Crimean Tatars wishing to show solidarity with victims of repression facing horrific sentences were not unexpected.  During the night from 2-3 November 2020, around 200 Crimean Tatars were stopped at the same place, and prevented from travelling on to Rostov.  On that occasion, however, the FSB closed the entire bridge, whereas this time it was left open to all but Crimean Tatars.

After the initial arrests of four Crimean Tatars in January and April 2015 unfortunately attracted little international attention, Russia’s FSB stepped up its persecution of Crimean Muslims in 2016, with the offensive increasingly against Crimean Tatar human rights or civic activists and civic journalists.  This prompted the emergence of the important civic initiative Crimean Solidarity and, generally, increased support from members of the Crimean Tatar community.

Russia responded by acts of intimidation and administrative prosecution, and then by increasingly arresting activists from Crimean Solidarity, using these conveyor belt ‘Hizb ut-Tahrir’ trials and sentences of up to 20 years’ as a weapon to silence those from Crimean Solidarity reporting on the repression.  There is literally no possibility for peaceful assembly in occupied Crimea, with even those wives or mothers who come out in peaceful lone pickets often detained and prosecuted.  The hearings extending detention began being held behind closed doors long before the pandemic, although these were often the only chance for relatives to see the arrested men.

In theory, the ‘trials’ are open, however here too, some reason or other will always be found for admitting very few people to the courtroom, even when, like on 12 January, sentences are awaited.

The particularly brutal treatment of Crimean Tatars who wanted to at least be outside the court room began in Moscow on 11 July 2019, when around 50 Crimean Tatar activists were detained.  They had been standing outside Russia’s Supreme Court, peacefully demonstrating their support for four Crimean Tatar political prisoners sentenced to huge terms of imprisonment, yet all were taken to police stations and prosecuted for supposed administrative ‘offenses’. So too were seven men, including several veterans of the Crimean Tatar national movement, detained on Red Square the day before.   Around 20 activists, most in their fifties and sixties, had gathered in a line along Red Square with placards reading: “Our children are not terrorists”; “The fight against terrorism in Crimea is a fight against dissidents” and “Stop persecution on ethnic and religious lines in Crimea”.

Russia’s arrests then came almost exactly 32 years after activists from the Crimean Tatar national movement held a large demonstration on Red Square demanding the right to return to their native Crimea after 43 years in enforced exile.  That protest was vital in gaining international publicity for the plight of the Crimean Tatars in the Soviet Union.  It is likely that this is the reason that Russia is now reverting to lawless measures stopping Crimean Tatars entering Russia.

In one of many poignant moments during Riza Omerov’s address to the ‘Southern District Military Court’ in Rostov on 11 January, the young Crimean Tatar noted:

“I lived under Ukraine, grew up, studied, married, everything steadily, like any other person.  Russia came, and the arrests, the detentions, the prison began. It feels like we have returned to the past. Memories come to mind, the accounts of our grandparents and all of that image appears before me, all of it as before.  Once again, we are ‘traitors’, and now ‘terrorists’ as well.  Terrorists without any crime.”

The Russian prosecutor has demanded a 13-year sentence in the case of Riza Omerov, although he is indeed not accused of any crime, and there are real witnesses who confirm that Riza was in a different place altogether when one of the two ‘secret witnesses’ claims to have heard words about ‘Hizb ut-Tahrir’ from him.  All three men are accused solely of alleged involvement in Hizb ut-Tahrir, with this, as Riza Omerov pointed out, purely because Russia’s Supreme Court declared the entirely peaceful organization , which is legal in Ukraine, ‘terrorist’ (doing so for political motives).

Enver Omerov, Riza’s father, is 59 and facing the worst sentence (19 years), with the FSB claiming, once again on the basis of two secret witnesses, whose testimony cannot be verified, that he, together with Aider Dzhapparov, ‘organized’ a supposed Hizb ut-Tahrir group.  In his  very strong address, which will be discussed in more detail separately, he also points to the violence, the violations of rights and reversion to the worst of Soviet repression that Russia brought to Crimea in 2014.

“Neither I, nor my people, have done anything that we would need to regret.  Crimea is our home and we have nowhere to run to”.

The words point to one of the key reasons why Moscow has so relentlessly persecuted Crimean Tatars and why it resorts to appalling acts of discrimination and repression like that on 11 January.  Crimean Tatars are in their homeland and, as the indigenous people of Crimea, they overwhelmingly demonstrated that they identify themselves as Ukrainians.