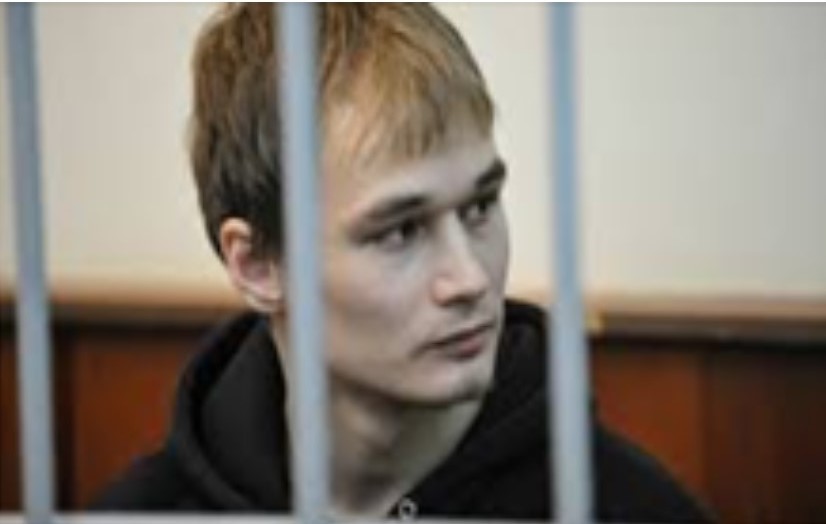 Russia’s persecution of Azat Miftakhov, a PhD student at Moscow State University is almost certainly linked with his anarchist views, however the 6-year sentence handed down on 18 January also looks like punishment for refusing to admit to something he did not do.  The Golovina District Court in Moscow sentenced him to six years’ imprisonment in a medium security prison colony purely on the basis of a ‘secret witness’ who claimed to remember him standing and watching while three others broke the window of an office of the ruling United Russia party and threw a smoke bomb inside.  Two other defendants - Yelena Gorban and Andrei Eikin, who had ‘confessed’ to committing this very minor offence, received suspended sentences.  Miftakhov has long been recognized as a political prisoner, and his release had been demanded by a huge number of academics, both in Russia and abroad.  The calls were ignored, with judge Sergei Bazarov passing virtually exactly the sentences demanded by the prosecutor.

Azat Miftakhov was detained on 1 February 2019 and has been imprisoned ever since although on radically different charges.  He was initially held on suspicion of preparing a home-made explosive found on 11 January 2018.  He was, typically, prevented from seeing a lawyer for the first day and has said that during that period, he was beaten, tortured with the use of a screw-driver and threatened with rape. Scars from the torture were recorded by civic monitors who saw him immediately afterwards.  The Memorial Human Rights Centre, which has declared Miftakhov a political prisoner, notes that 12 people were detained at that time, with all but Miftakhov released.  Several others also complained of having been subjected to torture.

Even after the court agreed to extend the initial detention on the original charge for a further three days, no evidence was produced to justify the charges and Miftakhov  was formally released on 7 February 2019, without any preventive measures ordered. He was arrested immediately on a quite different charge, one for which there was also no evidence.

The prosecution claimed that he was one of six people who, on 31 January 2018, were involved in the incident where a window of a ‘United Russia’ office in the north of Moscow was broken, and a smoke bomb thrown inside. Memorial notes that this was originally treated as a very trivial incident, but then several months later was reclassified as ‘hooliganism by a group of people by prior conspiracy (Article 213 § 2 of Russia’s criminal code), with several anarchists detained.  Here too, many of them have said that they were tortured into ‘confessing’.

Four people provided confessions and were released from custody. Two have since fled abroad, with at least one receiving political asylum in an EU country.  Gorban and Eiken have now received suspended sentences.

The prosecution claimed that three people had broken the window and thrown the smoke bomb, while three stood on and watched.  According to the charges laid over a year later, after the original attempt to prosecute Miftakhov failed for want of any evidence, Miftakhov was supposed to have been one of the three people who watched.

The only ‘evidence’ of this, which Miftakhov himself denies, was provided by a ‘secret witness’, who was unable to remember anything about what the young man was wearing, etc., but who claimed to remember him due to his ‘expressive eyebrows’.  That supposed ‘secret witness’, whose testimony can in no way be verified, is supposed to have emerged a full year after the incident. He claimed that at the time he had not reported it because his phone battery had died, and then he was ‘too busy’ to remember.

Memorial reports that this third attempt to remand Miftakhov proved successful, although one of the grounds presented as a ticket to Belarus which had been purchased when the young man was already in police custody.

Memorial considers the prosecution of Miftakhov to be “one of the most open and glaring examples of ‘juridical’ procedures being used to crush civic activity that the authorities don’t like”.  It is clear, they believe, that he is being persecuted because of civic activism.

It is particularly worrying that Miftakhov’s lawyer, Svetlana Sidorkina, believes that attempts may now be made to resurrect the baseless charge over preparation of an explosive device.  Memorial considers it to be proven that torture was used in this case to try to get ‘confessions’ from Miftakhov and others.  It notes that even this use of torture did not help the enforcement bodies to concoct a probable case.

Miftakhov is a talented mathematician who has written two papers while imprisoned, one of which has already been published, the other under consideration by an international journal.  This is doubtless one of the reasons why around one thousand academics, including many from the Russian Academy of Sciences, and Noam Chomsky, have endorsed an appeal in his defence.  The others lie in the brazenly fabricated nature of this prosecution and the manner in which it was concocted after a first failed.