5 years of torment for mother of Ukrainian POW seized by Russian-controlled Luhansk militants69-year-old Kharkiv region blogger tortured with electric shocks for answering his Russian captors in Ukrainian Ukrainian researcher savagely tortured for ‘confession to treason’ against Russian proxy ‘Donetsk republic’Four Russian invaders sentenced to 11 years for torturing hostages in Kharkiv oblast Kherson journalist, imprisoned by the Russians, tells of killing, rape and torture of hostages Former child hostage spends 7th birthday in Russian captivity for wanting to live in free Ukraine Russia uses Kherson ‘evacuation’ for enforced disappearance of more Ukrainian hostages and POWs ‘Guilty’ of being Ukrainian: Teacher abducted by the Russian invaders and held incommunicado for six months Silence abets Russia in torturing and risking the lives of Ukrainian hostages and POWs in occupied DonbasAbducted 16-year-old was forced to clean up after Russian invaders' torture of Ukrainian POWs and hostagesRussia abducts 25 volunteers delivering humanitarian aid to Mariupol, threatens to put them ‘on trial’ Russia extends terror and abductions from occupied Crimea and Donbas to all of Ukraine Russian invaders torture and threaten to kill civilian hostage in revenge for their military losses Ukrainian POWs and abducted civilian hostages illegally imprisoned in Russian-occupied Crimea Russian invaders abduct Mayor of Prymorsk Oleksandr Koshelevych after first taking his elderly father hostage Russian Rule of Lawlessness in Occupied Crimea and DonbasRussian invaders take Mariupol intensive care hospital and its patients hostage Russia kills Minsk Agreement, with lives of over 300 Ukrainian hostages and POWs in danger Russia is already holding many Ukrainian POWs without any declaration of warRussian proxy Donbas ‘republic’ threatens death sentence after torturing young father into ‘confessing’ to being a Ukrainian saboteur
• Topics / The right to liberty and security

Tortured but alive! Over two years waiting for news of Donbas militants’ hostage 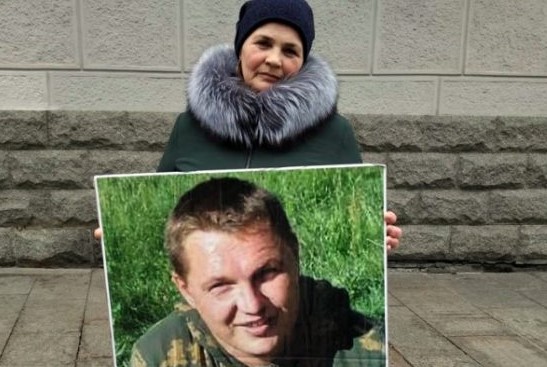 Valentina Boranova with a photo of her son, Stanislav Boranov, in captivity since 11.09.2017

Stanislav Boranov was seized in the self-proclaimed and Russian-controlled ‘Donetsk people’s republic’ [‘DPR’] on 9 September 2017, and remains in militant captivity to this day.  For over two years his mother, Valentina Boranova, and wife, went through hell, with no information as to what had happened to him.  It was only thanks to a hostage, released in the December 2019 exchange, that his mother even learned that Stanislav was alive, although the militants are holding him under the name Oleksandr Bozhok.

Boranov was 31, married, with a 7-year-old son, Platon, when he was seized by DPR militants. He had been a soldier in Ukraine’s National Guard for a year and a half, and according to his mother, took part in the liberation of Sloviansk in early July 2014.  In September 2017, he was not formally a member of the Armed Forces, and had told his mother that he was going to Kyiv for work.  It is likely that there were things the young man was not at liberty to disclose, and questions are clearly inappropriate until he is safely back in government-controlled Ukraine.

What is clear is that the so-called ‘DPR ministry of state security’ seized him and that he was held, and tortured, at the notorious ‘Izolyatsia’ secret prison in Donetsk which former inmates refer to as a concentration camp.  Judging by the accounts which former inmates have given, such torture is not aimed at obtaining information or ‘a confession’ which will normally have been beaten out of the captives soon after their seizure.  Halyna Hayeva, a nurse, then in her late 50s, recalls that at Izolyatsia, they tortured Ukrainians for ‘entertainment’.   Valery Sokolov, the former hostage who contacted Valentina Boranova, was held with her son later, in prison colony No. 97 in Makiyivka where the conditions are, at least, a bit better.

As far as the family are aware, he has not been officially ‘sentenced’, however the ‘charges’ include the standard ‘spying’, as well as the less common ‘abduction’.  Not even the Red Cross have been allowed to see him, however he is on Ukraine’s exchange list.

There are at very least 250 hostages currently held in the self-proclaimed ‘Donetsk and Luhansk republics’, although the figure is likely to be much higher.  The Boranov family are not the only relatives to be living in anguished hope, with little or no information about the whereabouts of their loved one.

Oleh Shevandin, a well-known Ukrainian sportsman, has not been seen since the morning after he arrived with his wife in Debaltseve in 2015 to help his elderly mother.  The case is particularly shocking both because the militants did not try to pretend to Larisa Shevandina that her husband had not been seized, and because he was almost certainly taken prisoner by members of the Russian military who Moscow claims are not involved in the conflict (details here).

There is equal lawlessness in the so-called ‘Luhansk people’s republic’ [LPR].  Roman Onishchuk also disappeared in June 2015, with his mother, Halyna, only receiving any confirmation that he was alive from hostages released in December 2017. Onishchuk was a serving soldier who was seized by Luhansk militants in broad daylight while travelling by taxi to his military unit (more details here).